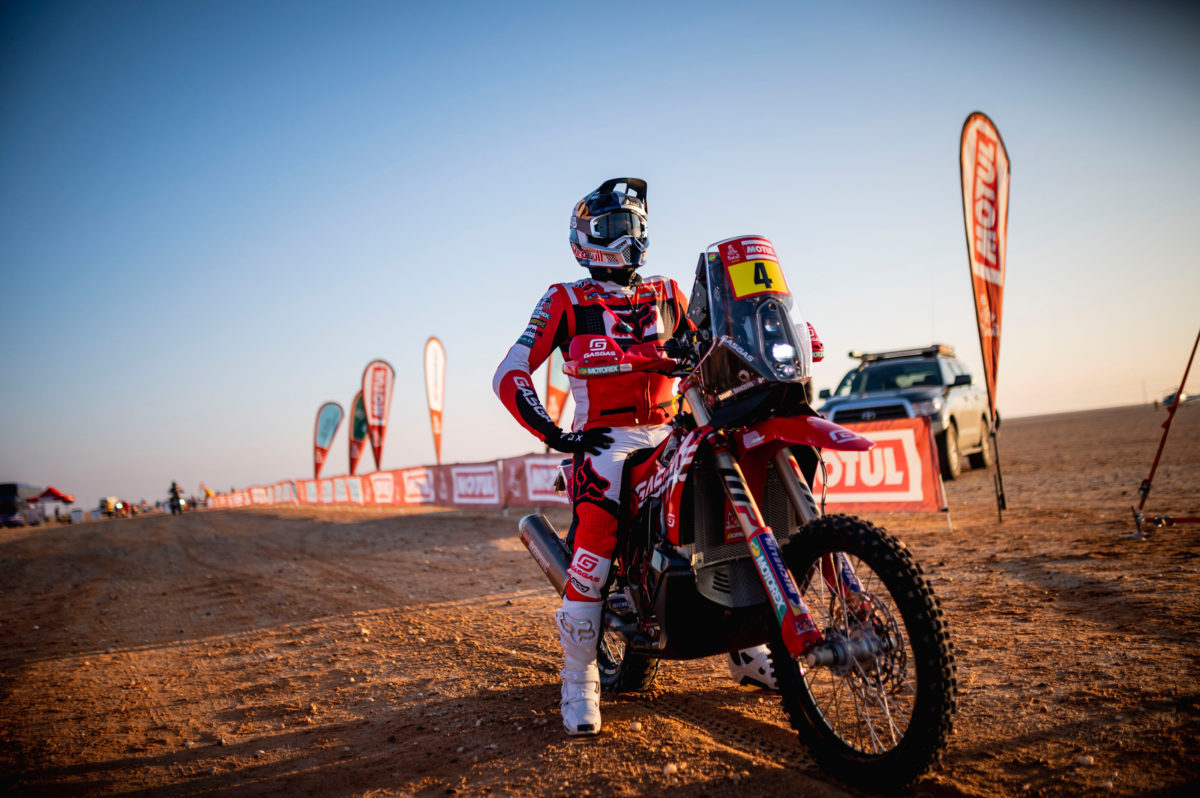 GasGas Factory Racing’s Sam Sunderland has extended his overall lead in the Dakar Rally despite finishing seventh on Stage 4.

Despite a tactical picnic stop on Stage 3 which ensured he would not have to open the road for the longest special of the event, Australian Daniel Sanders steadily lost time relative to the day’s front-runners on the other GasGas entry.

Sanders is fourth overall, 7:07s back from his team-mate even after clocking only the 18th-fastest stage time, because a 10-minute penalty from earlier in the event was withdrawn upon protest by GasGas.

Red Bull KTM’s Toby Price slipped to 16th overall after being 30th-quickest on the special.

Monster Energy Honda’s Joan Barreda Bort picked up his second stage win of the rally, but Tech3 KTM’s Danilo Petrucci was one of the biggest stories of the day.

The MotoGP racer turned Dakar rookie was fastest to each of the first three waypoints, 120km into the 465km special between Al Qaisumah and Riyadh, before ceding the ascendancy to Barreda.

The Spaniard was quickest for the rest of the journey, taking the finish line 4:37s up on team-mate Pablo Quintanilla, while Petrucci ended up third at 6:53s off the pace.

Rounding out the top five for the stage were Sherco TVS riders Rui Goncalves and Lorenzo Santolino.

Sunderland was only seventh-fastest on Stage 4 but, crucially, Walkner was one position and 90 seconds worse off, and Van Beveren was almost five minutes slower than the Briton.

Sanders lost at least a minute relative to the day’s front-runners between most waypoints, setting a time 18:28s away from Barreda’s and 8:13s away from Sunderland’s.

CLICK HERE for reaction from Sanders, who faceplanted during the stage

Compatriot Price saw his last two days of gains almost completely wiped out when he gave up 17:15s relative to Sunderland.

The two-time Dakar champion faced the challenge of being second onto the road, and had already dropped 10 minutes compared to Petrucci in the first 120km.

Stage 4 🏁 30th
Overall ⏱ 16th
Al Qaisumah ➡️ Riyadh
Starting out front today was quite tricky navigation, made tracks for everyone else which made it tough for me gain lost time back, a fair bit behind now but there’s still a long way to go… full gas! 🤘#Dakar2022 pic.twitter.com/dRTgHvdZPy

Petrucci is currently showing as 70th overall courtesy of a big penalty for failing to make the finish of an earlier stage due to a technical problem.

Next up is a loop around Riyadh which includes a 346km special.