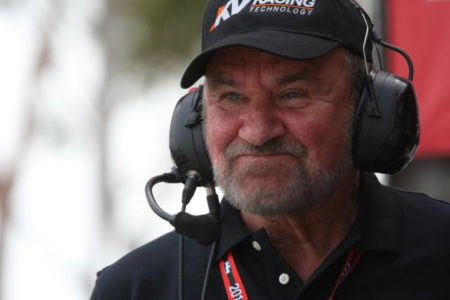 The Adelaide native was a pivotal figure in North American open-wheel racing both during and after the infamous ‘split’ between Champ Car and the Indy Racing League, as well as being a highly successful businessman and philanthropist.

KV Racing Technology (KVRT), which took its name from co-owners Kalkhoven and Jimmy Vasser, was founded in 2003 (as ‘PK Racing’) and would go on to win the Indianapolis 500 in 2013, with Tony Kanaan.

That was one of seven victories for the squad before it closed ahead of the 2017 season of IndyCar, to which it had moved upon unification of the series in 2008.

However, Kalkhoven’s influence on motorsport can be measured far more than the bare statistics of his eponymous race team.

After CART declared bankruptcy in January 2004, he, Gerald Forsythe, and Paul Gentilozzi rescued the category by purchasing the assets and becoming the new owners of what would be known as the Champ Car World Series.

In November of that same year, Kalkhoven and Forsythe bought Cosworth Engineering from the Ford Motor Company, ensuring engine supply for the Champ Car field as well as making them players in Formula 1.

According to respected United States motorsport journalist John Oreovicz, Kalkhoven believed IRL CEO Tony George, the enemy in the open-wheeler war, had also tried to acquire Cosworth in yet another attempt to kill off Champ Car.

Fittingly, the last ever Champ Car race, and indeed the only race for the category in 2008 as the reunification took place, was won by Will Power in a KVRT entry.

Fitting also was that said race was the Grand Prix of Long Beach, an event also co-owned by Kalkhoven through the Long Beach Grand Prix Association.

Sebastien Bourdais would be KVRT’s last winner when he triumphed in Detroit in 2016, his third victory for the squad.

A week earlier, the team had fielded three cars in the Indianapolis 500, including the Pirtek Team Murray entry belonging to Speedcafe.com owner Brett ‘Crusher’ Murray and driven by Matthew Brabham.

Outside of motorsport, Kalkhoven made his mark as a venture capitalist and was named by Worth magazine in 2000 as one of America’s top 50 CEOs.

That recognition came shortly after he oversaw the merger of technology company Uniphase Corporation with JDS FITEL, in 1999.

Kalkhoven had joined Uniphase in 1992 as president, CEO, and chairman, with the company’s annual sales rate increasing over 67 times during his tenure, from $23 million in fiscal 1991 to the $394 million for the quarter ending March 31, 2000.

He was also a noted philanthropist, including serving on the board of directors of the Association of Hole in the Wall Camps, which benefits children with serious and life-threatening conditions.

Kalkhoven was 77 years of age when he passed away.

Speedcafe.com extends its condolences to his family and friends.

Brett ‘Crusher’ Murray, Speedcafe.com owner and Indianapolis 500 entrant in partnership with KVRT in 2016

Jimmy Vasser, co-owner of KVRT for most of its existence