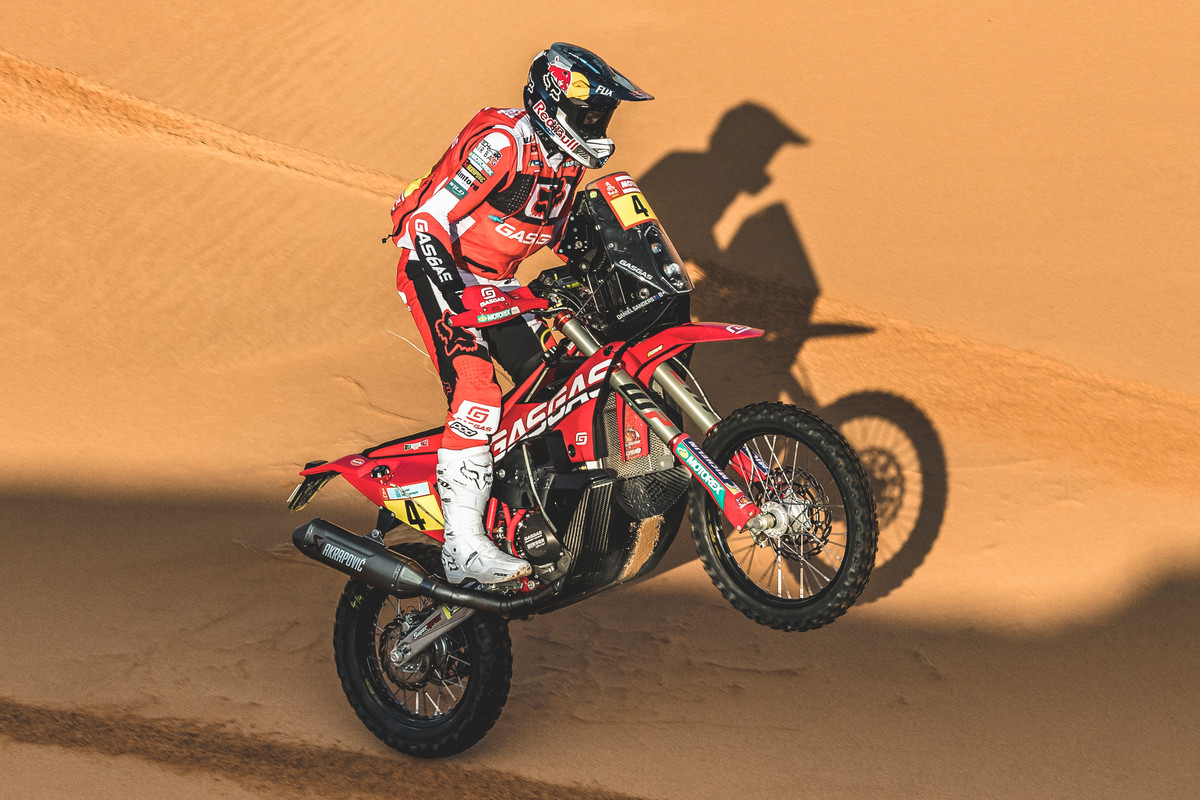 GasGas Factory Racing’s Daniel Sanders claims he deliberately gave up a win on Stage 3 of the Dakar Rally with a strategic picnic stop.

The Australian was fastest to every waypoint prior to the finish line, but ended up setting the day’s fifth-quickest time all-told at 2:55s off the pace.

However, with the road order set by the results from the preceding stage, Sanders saved himself the burden of having to navigate his way through the fourth special of Dakar 2022 without a trail to follow.

“We had a really fast part this morning and then it followed into some nice dunes, and it was really, really good,” recalled the 27-year-old.

“I made a lot of time up in the first 60km of the stage, then I sort of made about a minute on the guys and then I kept continuing through the stage because it had been shortened to 260km.

“In the end, I pushed all the way and could see there were no navigation mistakes.

“Then, just before the finish, I sit and have a picnic for a bit and wait for three minutes because I thought, I was pushing all day and it was a really good pace and thought I would be leading.

“So, I stopped for three minutes, I checked the clock, and then arrived perfect and I think I finished fourth on the stage which means I don’t have to open tomorrow.”

Illustrating the point, Sanders won Stages 1A and 1B, when he had a choice of starting position for the latter given the former was the prologue.

He had no such luxury on Stage 2 and would be 23rd-quickest on that special, before copping a 10-minute penalty on his rally time.

As such, the second-year Dakar rider was 23rd onto the course for Stage 3, and will be fifth away for the longest, 465km special of the event on Wednesday morning (local time; Wednesday afternoon AEDT).

Furthermore, he still gained time over the course of the latest special on GasGas team-mate Sam Sunderland, who holds the rally lead, and second-placed Adrien van Beveren.

“I knew [I was in front],” reaffirmed Sanders, who is now fifth overall at 8:54s behind Sunderland.

“I spoke with Jordi [Viladoms] last night and Norbert [Stadlbauer, GasGas team manager] in our team and Coma [Marc Coma, team advisor] and we sort of said, ‘OK, push all day.’

“In the end, the last 20km were some rocky sections, so I thought maybe they’d play with the navigation here, but yeah, it was really good to push all day, the bike was perfect.

“I just played it smart because tomorrow is the longest stage of the race and I wanted to start back a bit and catch the guys in front.

“I think today was good in not losing time to anyone really in the fight at the moment, but it’s Day 3 and I thought to slow down and be smart for once, it was a good thing.

Sunderland had prevailed on Stage 2, meaning Sanders’ games caused the end of GasGas’s winning streak, but there was little concern about that.

“It would have been cool to have another stage win but we’re here for 12 days not just to win each stage,” declared Sanders.

“It happened to me on the second day – I lost 30 minutes – so, yeah, we have to play it a little bit smarter.”

Stage 4 takes the field south to Riyadh, with Hero Motorsports’ Joaquim Rodrigues to lead the field out.