Price second on Stage 3 as Sunderland continues to lead Dakar

Price second on Stage 3 as Sunderland continues to lead Dakar 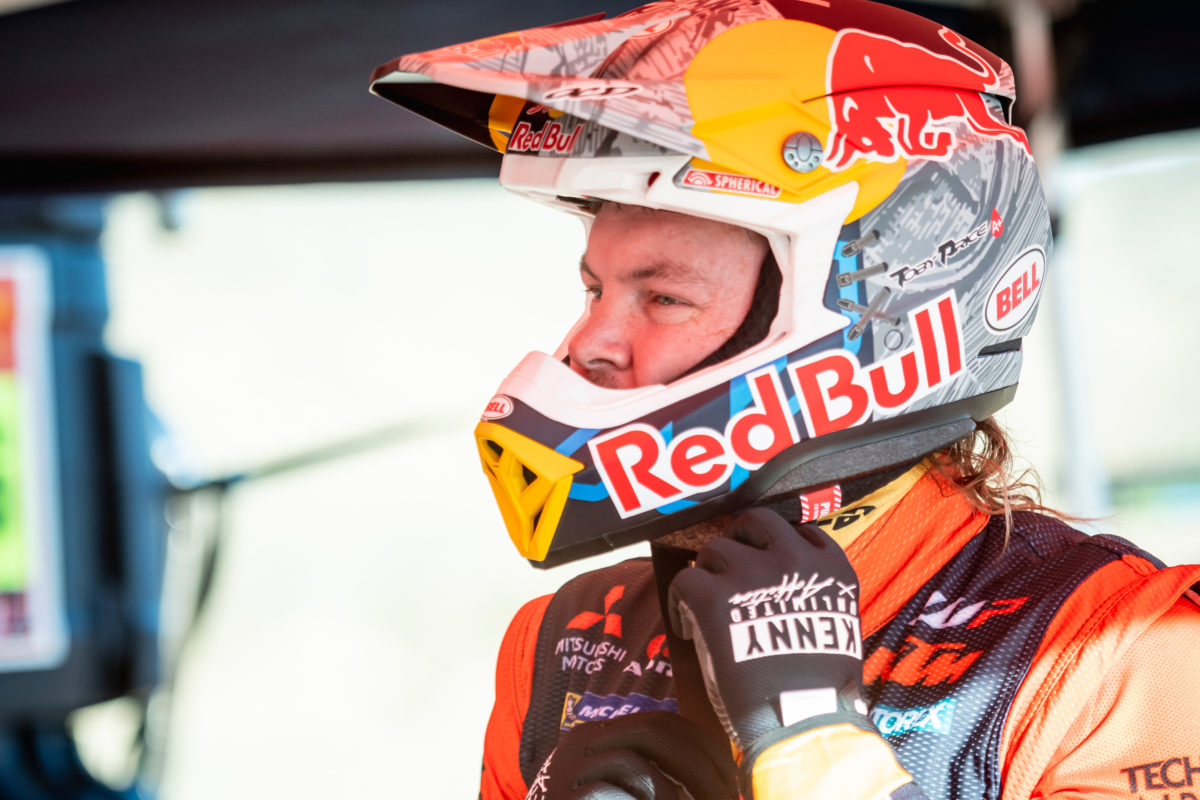 Red Bull KTM’s Toby Price has finished second on Stage 3 of the Dakar Rally while Sam Sunderland continues to hold the overall lead in the Bikes contest.

On a shortened, 255km special near Al Qaisumah, Hero Motorsports’ Joaquim Rodrigues prevailed by 1:03s over Price, with Mason Klein (BAS Dakar KTM) third and Skyler Howes fourth at less than 90 seconds off the pace.

GasGas Factory Racing’s Daniel Sanders ended up fifth for the day and is now fifth overall, 8:54s behind team-mate Sunderland.

Sanders, who started 23rd on the road after having to jump a canyon to limit the damage caused by a navigation error on Stage 2, was in fact the fastest rider to each of the first four waypoints.

However, the Australian lost time in the last 37km and ended up 2:55s slower than Rodrigues to the finish line.

CLICK HERE for Sanders’ explanation of a strategic picnic

Still, the second-year Dakar rider, who won Stages 1A and 1B, would be on top in the overall classification again if not for a 10-minute penalty issued after the completion of Stage 2.

Instead, that honour is held by Sunderland, despite quickly dropping down the day’s leaderboard when he was second out onto the course on his GasGas RC 450F.

However, having set only the 17th-fastest time on the latest special, the 2017 Dakar champion saw his lead for the 2022 event cut to just four seconds by Adrien Van Beveren.

The Frenchman rode his Monster Energy Yamaha to the ninth-best stage time, 4:43s slower than Rodrigues’ but 2:47s faster than Sunderland’s.

The overall top four features as many manufacturers, with Red Bull KTM’s Matthias Walkner third at 1:30s off the pace and Husqvarna Factory Racing’s Howes fourth at another 2:25s back.

On the other Red Bull KTMs, both Price and Kevin Benavides continued to chip away at their deficits to the top.

Benavides moved into the event top 10 for the first time since the prologue, the 2021 champion now eighth in the standings at a 17:45s margin, 3:02s closer to Sunderland than he had been.

Price sits 14th, 26:21s away from his British former team-mate, but will be one of the first onto the course for Stage 4 given his performance around Al Qaisumah.

Monster Energy Honda’s Joan Barreda Bort opened the road on Stage 3 and would manage only the 24th-fastest time for the day, leaving him 12th overall.

For Rodrigues, the stage win is the first of his Dakar career and also the first ever for Hero.

Meanwhile, MotoGP race winner Danilo Petrucci was back, albeit at the expense of a humongous penalty, after failing to finish Stage 2 due to a technical problem.

The Tech3 KTM rider set the 22nd-fastest stage time, although the fourth-best in the Rally2 subclass, but is officially more than 19 hours behind Sunderland overall.

Stage 4 takes the field south to Riyadh for the longest, 465km special of the event, which features a chain of dunes and a rocky finish.