New Year’s Thunder postponed due to spate of COVID infections

New Year’s Thunder postponed due to spate of COVID infections 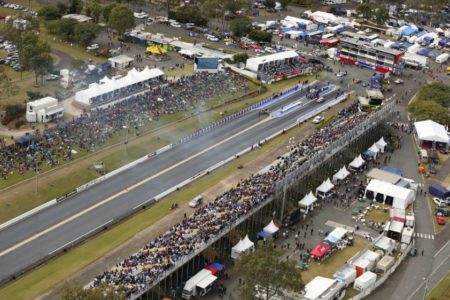 The Gulf Western Oil New Year’s Thunder drag racing event which was to have begun this Friday at Willowbank has been postponed due to a spate of COVID-19 infections.

An announcement from Willowbank Raceway cited “the increasing numbers of COVID cases throughout the East Coast of Australia, and the advice that a number of teams are now unable to attend due to team members and/or drivers contracting COVID,” as the main reason for the decision.

The 400 Thunder event will now be held at some point in February, with a precise new date to be announced.

The decision was jointly made between venue operators and organisers of the 400 Thunder series, and also took into account the weather forecast for this Friday and Saturday, as well as “the recommendation of the Queensland Government to stay at home due to rising COVID numbers.”

It is also hoped that, by postponing now, interstate competitors will be saved a wasted trip to Queensland.

There will, however, be a closed-venue test and tune this Saturday at Willowbank.

Motorsport is not the only sport affected by the current spike in COVID-19 infections in Australia, with fixtures in cricket’s Big Bash League and several in football’s A-Leagues postponed recently after players contracted the virus.