Loeb wins Stage 2 of Dakar, Taylor bounces back in SSV

Loeb wins Stage 2 of Dakar, Taylor bounces back in SSV 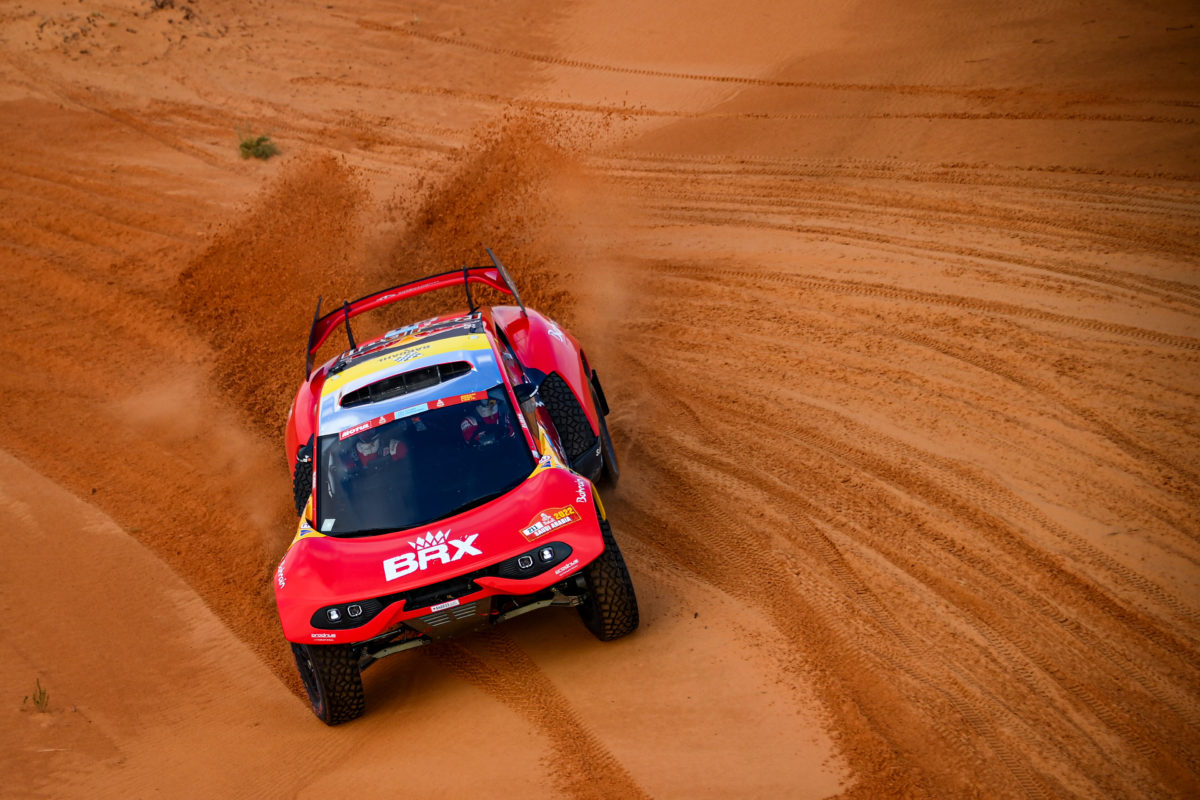 Sebastien Loeb has won Stage 2 of the 2022 Dakar Rally, chipping away at Nasser Al-Attiyah’s overall lead in Cars.

Those two finished first and second on the latest, 338km special between Ha’il and Al Qaisumah, the latter of which became the overnight stop due to flooding in the Al Artawiyah bivouac.

Loeb was 3:28s quicker on the day and continues to hold second spot in the general classification, 9:16s behind the three-time Dakar champion who spearheads Toyota Gazoo Racing’s effort.

Al-Attiyah opened the road by virtue of winning Stage 1B and while he set a strong pace, the nine-time World Rally Champion who followed him out was able to gradually claw back time between almost every waypoint.

Loeb’s stage win is the 15th of his career but the first since 2019, and the first at all on the Dakar for Prodrive.

“It was a real match, Nasser was pushing very hard,” said the Frenchman after stepping out of his Bahrain Raid Xtreme-entered (BRX) Hunter.

“He was opening the road for the cars but still he was really fast. We had to push like in WRC for almost 340 km.

“It was exciting, but it was a really tough, fast rhythm.”

Al-Attiyah revealed, “We hit a stone in the last 10 kilometres.

“We were in front of Seb, but after that we had to let him go. We decided to not continue pushing to avoid losing two or three minutes extra.

“But I’m quite happy with this stage, to open all the way.”

Overdrive Toyota’s Lucio Alvarez has moved up to third overall, 40:53s behind Al-Attiyah, from Giniel De Villiers in the second factory Toyota Hilux, and Vladimir Vasilyev in his VRT Team BMW.

After a horror show on Stage 1B, it was a better day for Team Audi Sport and its trio of electric RS Q e-trons.

Carlos Sainz and Stephane Peterhansel were third- and fourth-quickest, respectively, on Stage 2, with Mattias Ekstrom ninth in the third Audi.

However, Peterhansel was heavily penalised for failing to make the end of Stage 1B after a rock tore off a corner of his car, and is still over 23 hours off the pace in 68th position overall.

Sainz is significantly better off but still hardly in contention for a fourth Dakar title given he is 2:24:31s behind Al-Attiyah in 33rd overall, courtesy of navigational dramas earlier in the rally.

Ekstrom thus leads the way for the German marque in the general classification, albeit in 24th position.

Nani Roma rounded out the stage top five in the second of the BRX Hunters, with the Spaniard now 17th overall.

Molly Taylor, who is being navigated by fellow Australian Dale Moscatt, is back in the top 10 in the side-by-side race, up two spots from the 12th she held after a troublesome Stage 1B.

The Trucks section saw a third different winner in as many stages (including Stage 1A), although it was once again a Kamaz-Master sweep of the top four.

Andrey Karginov won the day but is third overall, behind Dmitry Sotnikov and Eduard Nikolaev, with Anton Shibalov fourth in the fourth Kamaz.

While the next overnight stop remains at Al Qaisumah, the 255km special which kicks off this afternoon (AEDT) is unchanged.