VIDEO: How not to recover a Dakar truck

VIDEO: How not to recover a Dakar truck 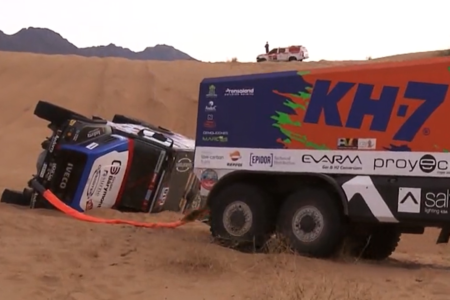 After Albert Llovera’s truck ended up on its side on Stage 1B of the Dakar Rally, the recovery of the Iveco did not go to plan. Instead of righting the other big rig, the KH7 truck manages only to pull bodywork off in the initial attempt to put #519 back on four wheels. 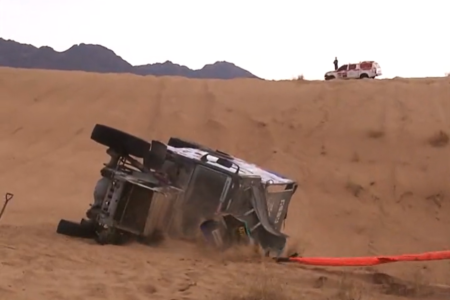 Llovera is in fact a former Winter Olympian who became a paraplegic in a skiing accident in 1985, meaning it was a complicated task to get him out of his truck.

However, the Andorran, who is contesting the Dakar for a seventh time, was still upbeat even as his day dragged into the early hours of Monday morning (local time).

Mechanics only showed up at 02:00, but they were attempting to repair the Fesh Fesh Team entry for Stage 2, which begins at Ha’il this afternoon (AEDT).

“We are in the race, the whole team is fighting a lot, and we will fight until the end,” wrote Llovera on Twitter.

Speaking about the incident, he admitted that driver error may have played a part.

“We were driving a bit too fast coming from back there and I came over the dune and we had a half a roll,” recounted Llovera.

“It’s a real shame because we were going pretty well, but we were perhaps going to fast; just a little bit too fast.”

There were no withdrawals from the Trucks field after Stage 1B, indicating that the 55-year-old’s Dakar 2022 campaign is indeed still alive.