Price: ‘It’s a bit of a shit way to start the rally’

Price: ‘It’s a bit of a shit way to start the rally’ 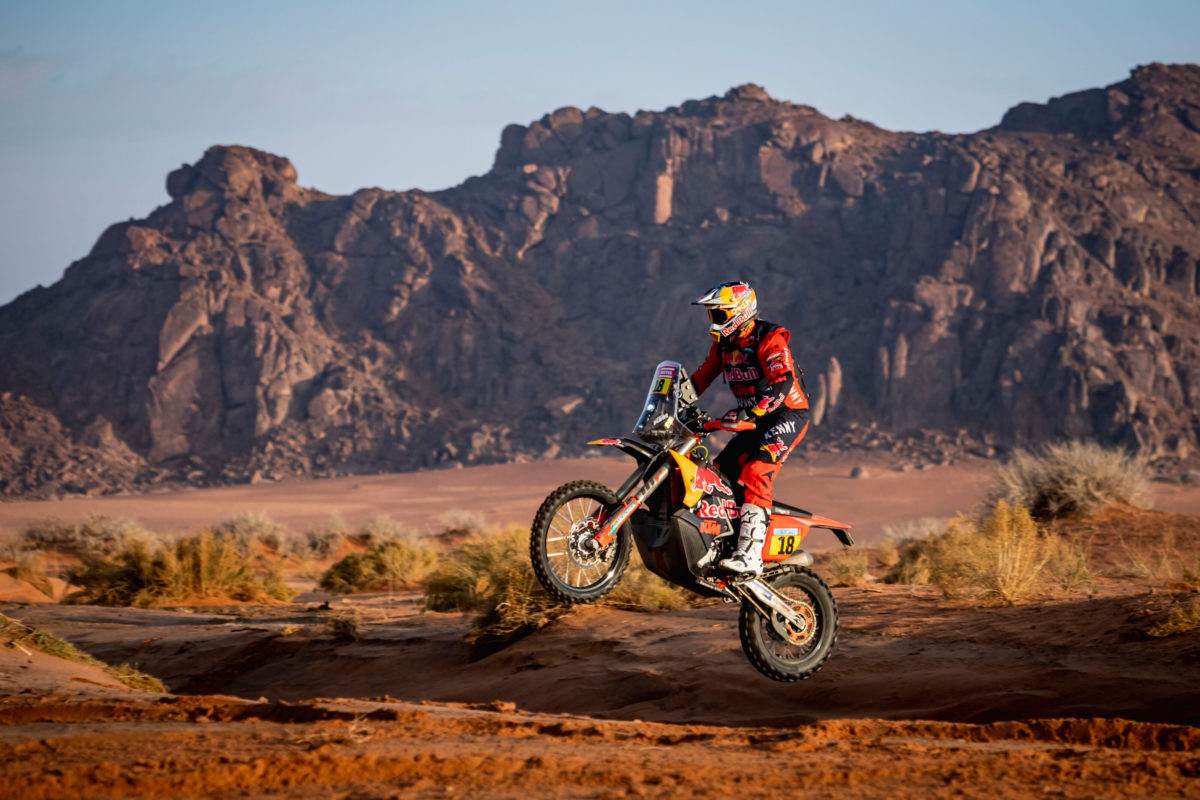 Toby Price has lamented a “shit” start to his 2022 Dakar Rally campaign after he was one of many to fall afoul of a confusing navigational note.

The two-time Dakar champion has, however, not given up on his title hopes despite plummeting to 47 minutes off the event lead after Stage 1B.

Price had set the eighth-fastest time on the prologue, known now as ‘Stage 1A’, and was tracking at around four minutes behind eventual stage winner Daniel Sanders on the latest special.

However, he was among several to get lost between the Kilometre 240 and Kilometre 299 waypoints on the Ha’il loop stage, where he dumped almost 40 minutes.

The Red Bull KTM rider is now all the way back in 22nd overall, ruing a note in the road book which apparently caught out many of his rivals also.

Speaking straight after the stage finish, Price declared, “It’s a bit of a shit way to start the rally.”

Later, he remarked, “The stage was a bit of a rough one for me today.

“There was one note that just didn’t seem to add up properly, didn’t quite make sense to me, so I ended up getting lost for 45, maybe 50, minutes.

“So, not a good way to start the rally. But it’s early days and let’s see what happens.

“No crashes, so that’s good, but a costly navigation mistake.

“I’ll keep my head down and keep at it and see what tomorrow brings.”

KTM team-mate Kevin Benavides, who carries the #1 plate as the 2021 Dakar champion, suffered the same mishap.

The Argentine is now 14th overall, more than 36 minutes away from Sanders.

“The only thing I can really say is that today was not the best first day for me,” said Benavides.

“There was a lot of confusion surrounding one note on the road book, which caused a lot of different riders, myself included, to make a mistake. It was such a frustrating situation.

“Finally, I was able to find the correct track, but of course I lost a lot of time.

“The important thing is that I felt really good on my bike. There’s a lot of kilometres still to race, so it’s important to stay positive and go again tomorrow, and push for good results.”

Matthias Walkner is KTM’s best placed rider, in third position at 11:06s off the pace.

“It was a good day but super tricky with the navigation today,” recounted the Austrian, who won the Dakar in 2018.

“The rain certainly made the sand harder and things a little more challenging, but a few of us worked together, riding in a fast, strong group at the end of the stage to make sure that we arrived at the finish in a good way.

“In the morning the rain made the sand firmer and really nice to ride on, but at the end of the day it was much more challenging and harder to ride on.

“Although today was a hard day, it’s only the first day of the rally. We saw it last year, you can lose or win 30 minutes or so, but at this early stage in the race that doesn’t mean too much.”

On the other factory KTM entry, MotoGP race winner Danilo Petrucci ended up 13th-quickest on his first stage proper in a Dakar and holds the same position overall.

“I was so nervous at the start.

“Generally, all went OK for me but the 120 kilometres after the refueling seemed really, really long for me, especially with the big dunes.”

Stages 2 and 3 were to have been run to Marathon regulations, meaning no outside assistance for competitors, including at the overnight stop.

However, that rule has been dropped due to flooding at the Al Artawiyah bivouac, with tweaks to the route still being finalised.

Sanders is set to lead the field out this afternoon for Stage 2, which now takes the field to Al Qaisumah, on his GasGas bike.