Nasser Al-Attiyah has stretched his Dakar Rally lead by winning Stage 1B but Audi’s big guns, Stephane Peterhansel and Carlos Sainz, appear already out of contention for this year’s crown.

On a nightmare day for Team Audi Sport, which is debuting a trio of electric RS Q e-trons this year, Sainz dropped over two hours after he got lost and Peterhansel is more than 23 hours off the pace after a crash on the 333km loop stage around Ha’il.

‘Mr Dakar’ was just six seconds slower than Al-Attiyah to the Kilometre 121 waypoint but soon broke the rear axle when he apparently hit a rock in camel grass.

Peterhansel and co-driver Edouard Boulanger dumped more than six hours waiting for the Audi assistance truck and ultimately chose to exit the stage at the Kilometre 207 neutralisation.

Nevertheless, they could yet return to the event in what would essentially become an elongated test for the new RS Q e-tron.

Sainz had drifted to almost seven minutes behind Al-Attiyah when he and co-driver Lucas Cruz lost their way between Kilometres 240 and 299, which cost them almost another 120 minutes more relative to the Qatari in the #201 Hilux. 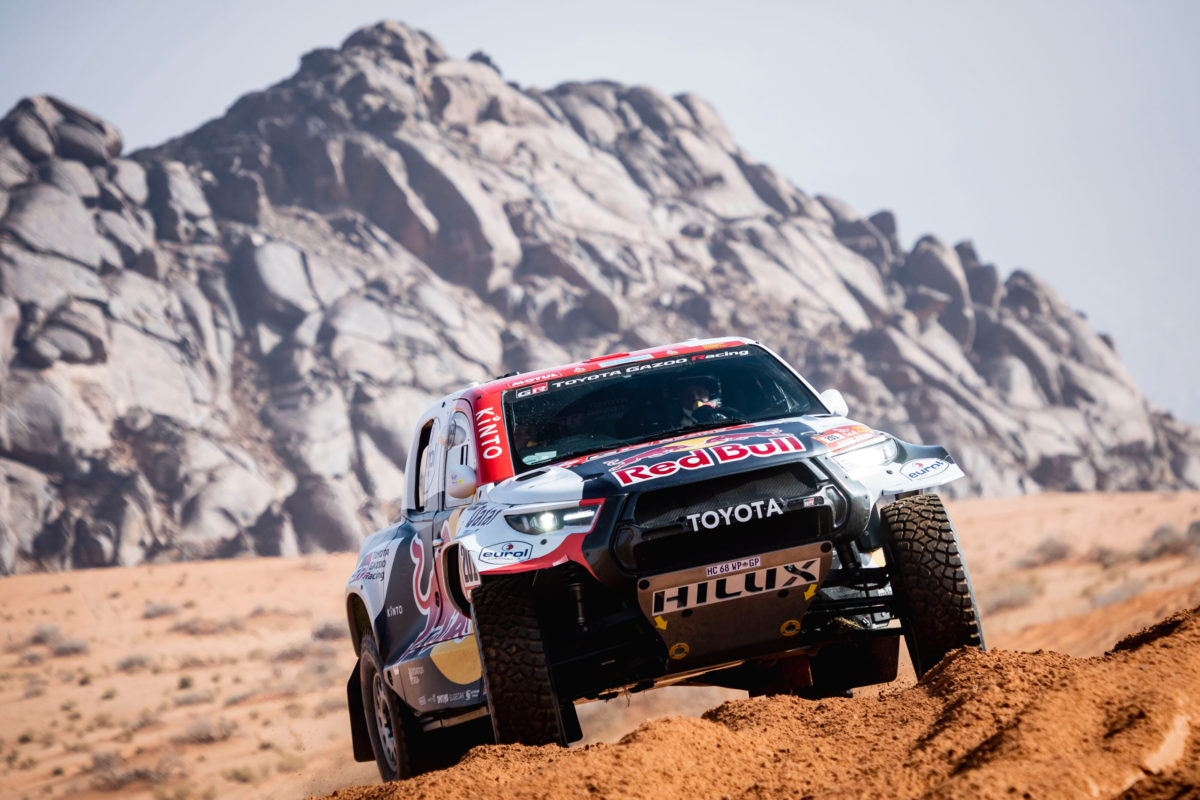 Al-Attiyah, who won the prologue and hence chose to start 10th in the road order, was quickest to every waypoint and now leads the event by 12:44s.

The three-time Dakar champion’s nearest rival is nine-time World Rally Champion Sebastien Loeb, who ended up in the Toyota Gazoo Racing driver’s wheel tracks for the run home on Stage 1B.

It was far from a trouble-free day for Loeb, however, the Bahrain Raid Xtreme pilot suffering two punctures along the way.

“It really wasn’t simple; we messed up and started with two punctures before the neutralisation,” admitted the Frenchman in the #211 Prodrive Hunter.

“There was no room for error in the second part. Then Nasser caught up with us [and] I was keeping it cool behind him.

“It was a bit easier with fewer rocks, so I thought we could keep going at a high pace and we made it to the finish in much better shape than at the neutralisation.

“Both Nasser and Matthieu [Baumel, co-driver] are strong. You can see it from behind them…”

The former is 22 minutes behind Al-Attiyah and the latter almost 29 minutes back at this early point of the rally.

Nani Roma is 29th overall in what is now the third-placed BRX entry, while Mattias Ekstrom leads the way for Team Audi Sport in 37th, after they too got lost on the run to the penultimate waypoint.

Sainz sits 48th in the overall classification and Peterhansel in 62nd.

Molly Taylor and co-driver Dale Moscatt (Can-Am Factory South Racing) slipped from sixth to 12th overall in the side-by-side contest after troubles both navigational and technical.

She is 54:43s behind team-mate Aron Domzala, who is the new rally leader after Marek Goczal (Cobant-Energylandia) lost more than 45 minutes before the first waypoint.

The Kamaz-Master team continues to dominate Trucks, although Dmitry Sotnikov has leapfrogged Eduard Nikolaev into the rally lead with a margin of 31 seconds thanks to a 38-second win on Stage 1B.

Stage 2 runs from Ha’il to Al Artawiya, a 568km journey which includes a 338km special and plenty of sand dunes.