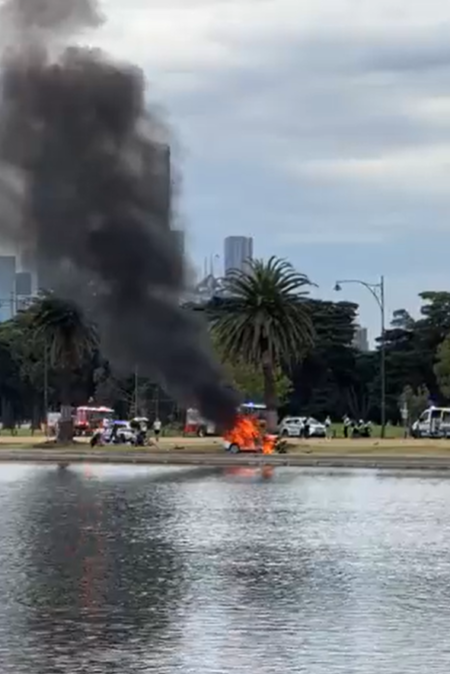 Three people have been injured after an allegedly stolen car crashed and caught fire on the Albert Park streets which make up the Formula 1 Australian Grand Prix circuit.

The incident occurred this morning, just after 09:00 (local time/AEDT), when the driver of a Holden Astra lost control on Lakeside Drive.

The vehicle crashed through bollards and then into a tree, before flames took hold.

According to Victoria Police, the male occupant suffered lower leg injuries, one female occupant sustained concussion and bruising, and the other incurred a broken wrist.

They were assisted from the burning car by passers-by, before being taken to The Alfred Hospital in a stable condition.

“Investigators have been told the driver of a Holden Astra travelling north along Lakeside Drive lost control and drove through bollards,” said a police spokesperson.

“The hatchback then crashed into a tree before igniting and bursting into flames.”

The three occupants are believed to be aged in their mid-20s to early-30s.

According to the Herald Sun, Moorabbin Crime Investigation Unit detectives believe the car was stolen from the suburb of Mentone, which is located around 20km southeast of Albert Park, earlier in the morning.

Lakeside Drive forms almost half of the race track, namely the eastern side which includes the heavily reprofiled section which was once Turns 9 and 10 of the circuit, and is currently subject to a 40km/h speed limit due to roadwork.

Video footage captured by bystander Paul Maric and uploaded to Twitter suggests that the incident occurred on the long left-hander which follows the old Turn 9/Turn 10 complex.

The 2022 Formula 1 Australian Grand Prix takes place on April 7-10 and is set to be the third event of both the World Drivers’ Championship and Repco Supercars Championship.