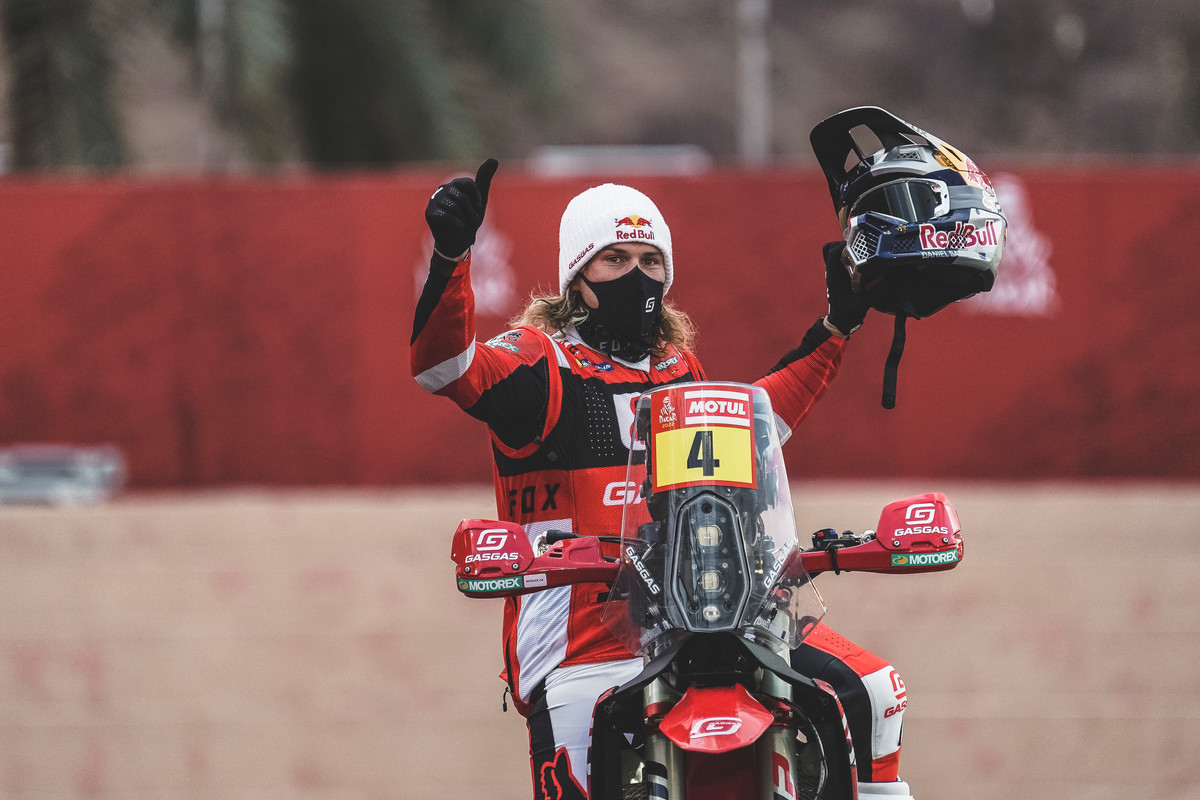 Daniel Sanders has set his sights on taking out a full-length Dakar stage after topping the prologue at the start of the 2022 event.

The Australian was fastest on the 19km special between Jeddah and Ha’il which, along with the 595km liaison, officially formed ‘Stage 1A’ of the rally.

The triumph means the second-year Dakar Rally rider not only becomes a stage-winner in the famous event, but so does the GasGas marque which he now rides for.

However, Sanders is now looking to also win at least one of the 12 stages which remain between now and January 14, when the contest draws to a close.

“Although it’s just prologue, I’m looking forward to trying to win a stage this year.

“I think with the sand on the first couple of days, it will be good to try and win one of these, but you have to have a lot of things go your way.

“But, really, really excited to get this race underway. I’ve waited one year for this and I’ve trained really hard, so now it’s time to put it all together and see what I can do.”

Sanders made his Dakar debut in 2021 on the fourth KTM entry, before being switched to GasGas, one of the Austrian offroad powerhouse’s sister marques.

He went on to finish third in the FIM Cross-Country Rallies World Championship, and is feeling at ease with his GasGas RC 450F Rally as Dakar 2022 gets underway.

Officially, his lead in the classification is exactly one minute over Honda’s Pablo Quintanilla, with Stage 1A times multiplied by five in a bid to discourage strategic games.

“It was a really good feeling to start the rally,” said Sanders.

“The bike was handling unreal and I read the terrain really well, so I’m well-prepared, but it’s a long race.

“This is just a bit of prologue but it’s cool to show some speed, but the navigation has to start tomorrow; I’m looking forward to the long race.”

Being one of the top 15 finishers on Stage 1A, Sanders has earnt the right to choose where in that 15 he will start in the road order on Stage 1B, which takes in a loop around Ha’il.

Compatriot Toby Price, who remains at Red Bull KTM Factory Racing, will do likewise after he set the eight-fastest time.

The two-time Dakar champion is officially 2:55s off Sanders’ pace, and admitted his was not a perfect stage.

“Made a couple of little mistakes with the rolling hills where I thought there was a little bit of a drop but they were quite smooth,” wrote Price on social media.

“All in all, it’s the first day and there’s a long way to go… looking forward to what the week will bring!”

On another KTM, Nomadas Adventure’s Andrew Houlihan sits 115th in the early stages of his second Dakar campaign.

Fellow Australian Molly Taylor has begun her debut Dakar with the sixth-fastest time in the SSV (side-by-side vehicle) class.

Stage 1B is a 514km outing, including a 333km special, with the bikes to set off late this afternoon (AEDT).