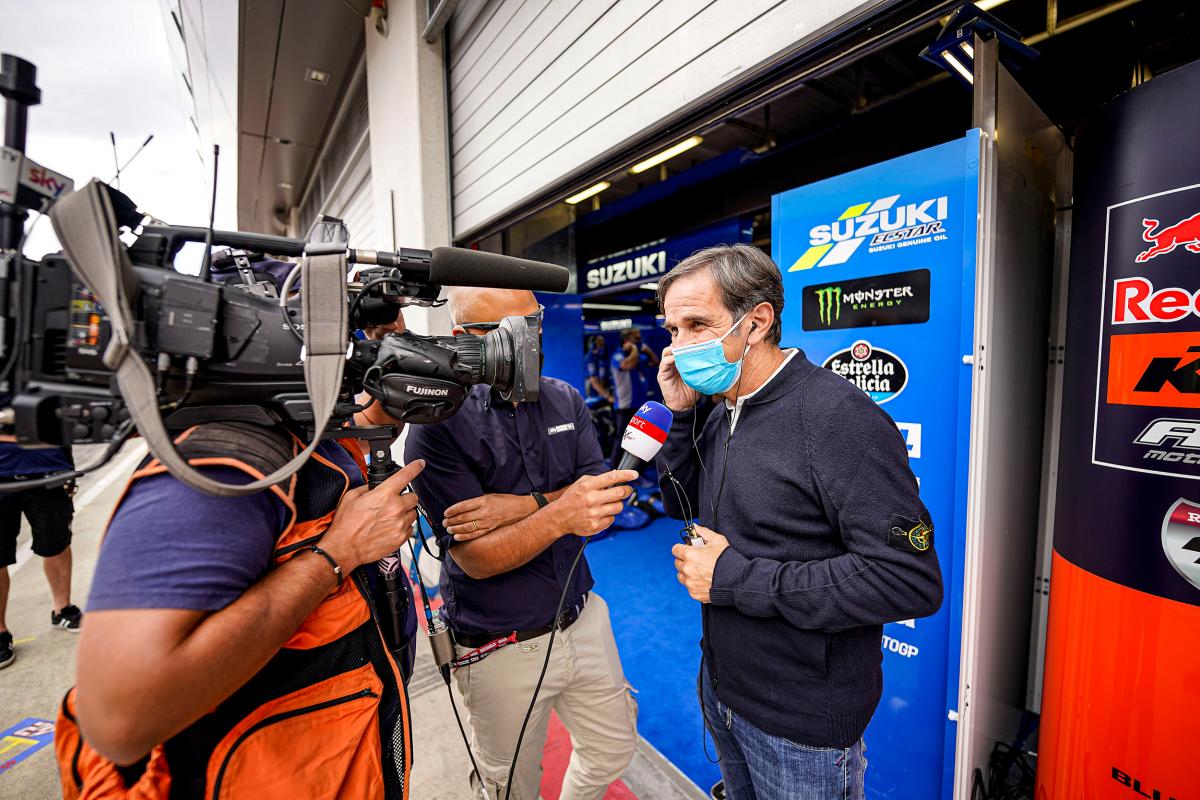 Davide Brivio in the MotoGP pit lane in 2021. Picture: MotoGP.com

Alpine Formula 1 racing director Davide Brivio has ruled out a return to a MotoGP team management role this year.

Brivio headed up Team Suzuki Ecstar from its return to MotoGP in 2014 until the end of its title-winning 2020 season, after which he joined Alpine.

There, he has been part of a complicated management structure that sees responsibilities split between himself, Laurent Rossi, and Marcin Budkowski.

Speculation that the Italian might be on his way back to two-wheel competition has persisted, with a return to Suzuki or a role at the VR46 Racing Team being touted as the more likely possibilities.

Meanwhile, Otmar Szafnauer had been talked of as a defector from Aston Martin to Alpine, something which the American would also deny.

Suzuki’s project leader, Shinichi Sahara, quashed the idea that Brivio would rejoin the Hamamatsu marque in November, and the man himself has now stated he will not work in MotoGP at all in 2022.

“MotoGP is not an option for 2022 at the moment,” Brivio told Italian outlet GPOne.com.

“I’m in F1 and we’re working on next season so we can sort out how to get organised with Alpine.

“In fact, I hope to continue; for this very reason, I am thinking of nothing else.”

Sahara’s comments came despite his admission that taking on the team manager role also was “way too much” for him.

Suzuki had chosen to not directly replace Brivio in 2021, with his responsibilities distributed among several others, although it was Sahara who seemingly bore the brunt of the added workload.

He is thus on the lookout for a new team manager, although one is yet to be announced.

Brivio had also been considered a logical appointment for VR46 given he was team manager at Yamaha Factory Racing during Valentino Rossi’s time there, and subsequently a consultant to his compatriot when ‘The Doctor’ left for Ducati in 2011.

Pablo Nieto remains team manager at VR46, which will this year have a team in the premier class and two in Moto2, including one as a partner of Yamaha.

There has been change at Red Bull KTM Factory Racing, which snared Francesco Guidotti from Pramac Racing to replace Mike Leitner as team manager.

Pramac has filled the breach by promoting Claudio Calabresi from the head role in its MotoE programme.

Official MotoGP track activity resumes on January 31 with the Shakedown Test, for test riders and rookies, at Malaysia’s Sepang circuit.