Gardner: Memory of Moto2 title win ‘will live with me forever’

Gardner: Memory of Moto2 title win ‘will live with me forever’ 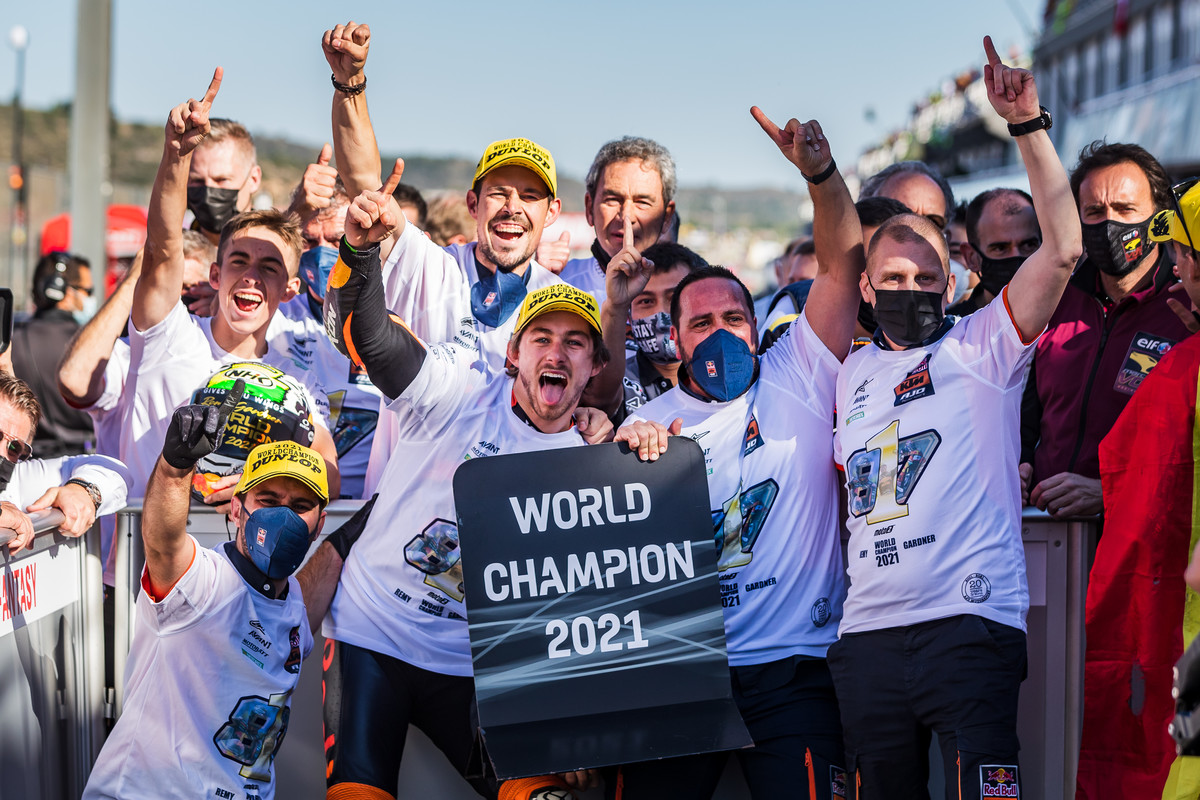 KTM rider Remy Gardner says winning the Moto2 title surrounded by family and friends will probably be remembered as the best day of his life.

Gardner, just 23, has been a staple of the Moto2 grid since making his debut midway through 2016.

In the first nine races this year, Gardner was a podium finisher in all but one. That included three wins on the trot in Italy, Spain, and Germany.

The Sydney-born rider would ultimately clinch the title, edging out team-mate Raul Fernandez in a grandstand season finale.

“It was good, a really amazing day,” Gardner told Speedcafe.com on Episode 5 of KTM Summer Grill.

“I had all my family there, all my girlfriend’s family as well, my mates, my dad; it was an amazing day.

“It was nice to see dad in parc ferme and really amazing.

“It’s obviously going to be amazing, probably the best day of my life, isn’t it?

“It was great to be surrounded by mates. That memory will live with me forever.”

The title run wasn’t all smooth sailing. Gardner was thrown a curveball in the penultimate round of the season in Portugal when he clashed in practice with Spaniard Marcos Ramírez.

That resulted in two broken ribs for the Australian.

Despite that, Gardner would qualify second on Saturday and go on to win come Sunday.

Second place for team-mate Fernandez would ensure that the title race went down to the wire.

“I knew I had probably broken ribs, but I didn’t want to get any x-rays or see doctors or anything,” said Gardner.

“I just wanted to keep it quiet and get on with the job. Definitely painful. In the end, after the GP test, I actually went and did a cat scan and I had the 10th and 11th, two broken ribs. Not displaced but they were snapped off. They were floating around in there.

“Friday I was feeling a bit shitty, not just about the pain but I thought it’s two races to go, everything is on the line and I’ve just gone and broken my ribs. Everything has just gone to hell.

“For sure, Friday night, my girlfriend helped me a lot, kept me positive. I woke up on Saturday and said, ‘You know what? Let’s just give it all that we can and use it as extra motivation’.

“And for sure, you’ve got to be really mentally strong to do those kinds of things. I just managed to power through it and for sure, in the race, it was painful. Really, really painful.

“I wasn’t happy that we didn’t wrap it up in Portugal because I was like, ‘Oh great! Now we’ve got to do it again the next week in Valencia’ because it was one week after. I was proud of myself when I won that race, especially with the broken ribs.”

In the end, Gardner would finish 10th in the season finale, securing him the title by a mere four points.

In 2022, Gardner and Fernandez will step up to the MotoGP World Championship, both with Tech3 KTM Factory Racing.