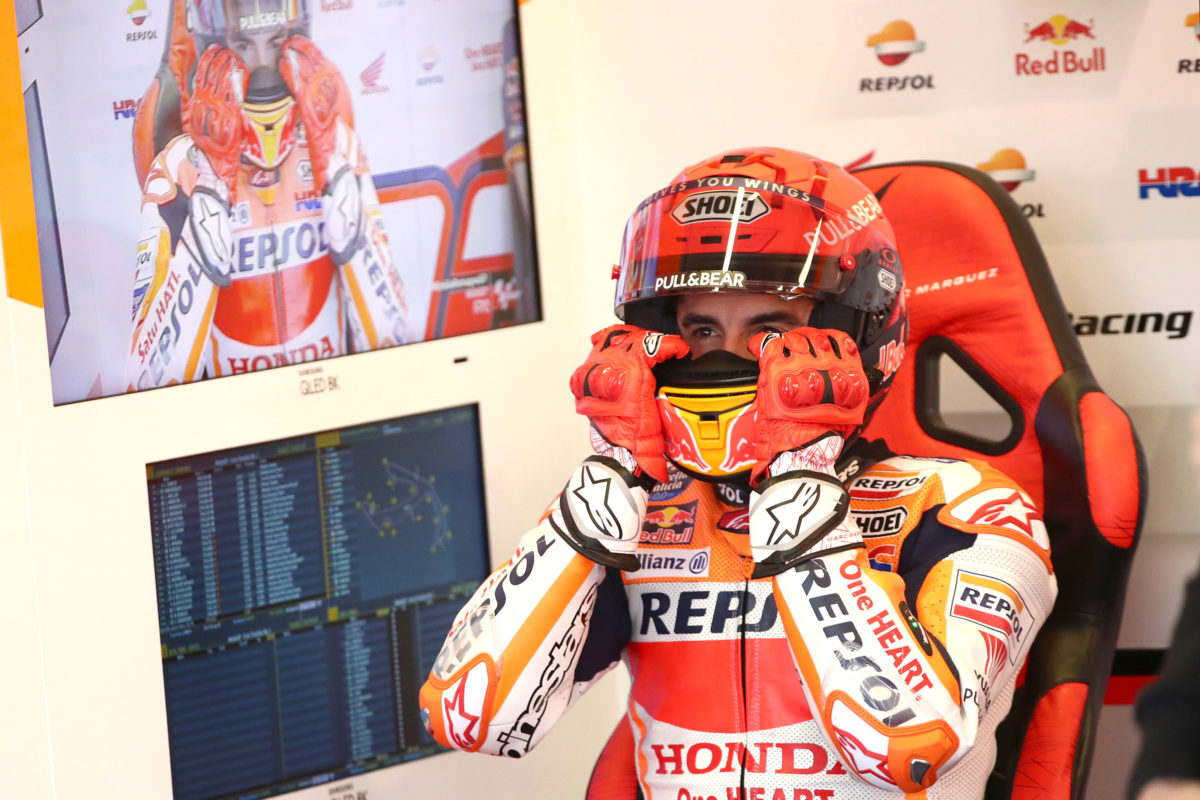 The Repsol Honda Team has issued an update on Marc Marquez’s ongoing recovery from an eye injury, committing him only to continued physical training for the 2022 MotoGP season.

Marquez missed the last two rounds of the 2021 campaign and the post-season test in the days which followed, as a result of a crash in training ahead of the Algarve Grand Prix.

He was initially announced as suffering concussion, and subsequently diplopia (double vision), having picked up a similar eye injury to that which he incurred around a decade earlier in a Moto2 crash.

According to team principal Alberto Puig, Honda would “make decisions” after a further check-up around Christmas time, although the announcement arising from what seems to be that check-up is somewhat vague.

In a press release titled “Marc Marquez progresses adequately with diplopia diagnosis”, it has been stated that #93 can continue training, but there is no explicit advice as to when exactly he will return.

“The Repsol Honda Team rider, who last October was diagnosed with an episode of diplopia after suffering a fall while training for the Portuguese GP, has continued periodic visits to his trusted ophthalmologist to assess the evolution of his vision over the past two months,” begins the announcement.

“During these reviews the progress made has been deemed favorable and as a result Marquez will continue with a conservative treatment plan for the next few weeks.

“Marc Marquez will continue to undergo periodic reviews with Dr. Sánchez Dalmau during the coming weeks alongside the conservative treatment plan.

“The situation does not prevent the rider from Cervera from continuing his physical training plan to prepare himself physically for a new season.”

That statement comes shortly off the back of Puig telling media in his native Spain that Honda was “not considering” the possibility that its superstar might still be out injured when the 2022 campaign gets underway.

The outspoken former rider quipped that to think about that situation “would be like self-flagellation,” but did stress that Marquez is following doctors’ orders.

Marquez has had a torrid run since winning a sixth premier class title in 2019, having crashed out of the first race of 2020 then had to abort a comeback the very next weekend.

That attempt to contest Round 2 came after the first of what would ultimately be three operations to address his badly broken arm, as well as resulting pseudarthrosis (false union) and an infection.

The lay-off persisted into the start of the 2021 season, after which Marquez continued to battle with a weakened right arm and shoulder, notwithstanding his three victories this year.

Despite eventually missing a total of four races, two each at the front and back ends of the season, he was the top Honda rider in seventh in the standings, highlighting his importance to the Japanese marque.

Should Marquez be unavailable again at the beginning of the 2022 title race, Honda Racing Corporation test rider Stefan Bradl looms as an obvious candidate for what would be a return to a fill-in role for the German.

For now, Bradl is set to be in action from January 31, when the Shakedown Test kicks off at Malaysia’s Sepang.