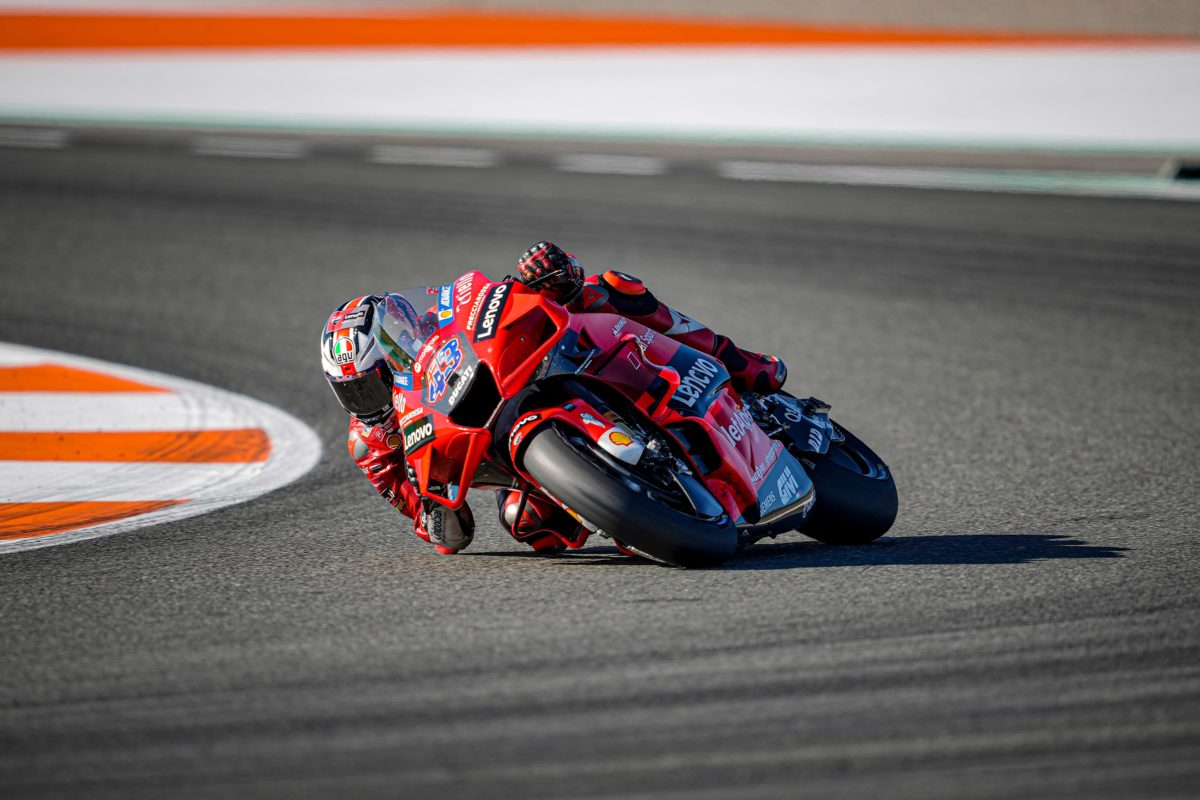 Ducati believes that it needs to help Jack Miller improve his tyre management, in order to be a more consistent presence at the pointy end of the MotoGP field.

Miller had an up-and-down first season at the factory Ducati Lenovo Team, taking his first two race wins with the Bologna marque but only five podiums in total, out of a possible 18.

The Queenslander finished fourth in the championship, but was 71 points behind team-mate Francesco Bagnaia and only eight ahead of Johann Zarco, who competed for Ducati satellite team Pramac Racing.

Asked by Speedcafe.com what Miller needed to be a more consistent performer, the marque’s sporting director, Paolo Ciabatti, pointed to a deficiency in his riding style that needs to be fixed.

He also stressed, however, just how much Ducati rates ‘Jackass’, who has been in its ranks since he left the Honda stable at the end of 2017.

“Obviously, I think his talent is there; nobody has doubts about Jack’s talent,” said Ciabatti.

“He’s probably one of the fastest riders; in certain conditions, also probably the best or one of the best riders, when it’s wet or partly wet.

“But, sometimes his riding style is not helping him to save the tyre for the second part of a race, and I think this is one of the areas where we need to help him to improve.”

Miller has been on a series of ‘one-plus-one’ contracts throughout his time with Ducati, including the deal for the 2022 MotoGP season which he signed in May, after which he said the term was “never my idea”.

Ciabatti says the 2021 contract, which represented a promotion from Pramac, was such because it was signed before racing had even begun in the COVID-delayed 2020 campaign.

He offered no explanation for next year’s agreement being more of the same, although it does bring #43 into alignment with most of the rest of the field, including Bagnaia.

The latter has enjoyed the security of a deal for 2021 and 2022, but that was announced in late-September of 2020, around halfway through that season, and after Andrea Dovizioso’s exit was confirmed.

“We decided to sign Jack around May last year when it was lockdown, COVID…

“We didn’t even know if the 2020 season was about to begin and when, but at that time we decided, ‘OK, we want to secure Jack,’ but with the visibility we had at that time without even knowing if would be a championship in 2020.

“We decided that signing him for 2021 was already a sign of confidence in his performances, so this was just a specific moment in time when we had to make a decision.

“In principle, we said we make a decision [and] it will be halfway through the season, but at that time, the season had not started so we could not see anything, any results, any progress…

“It was just like taking the best possible decision, giving confidence to Jack but without having yet seen anything in 2020.”

Going into 2022, Ducati has stability in the four seats which it controls, with an unchanged factory team line-up and also at Pramac, where 2021 rookie race winner Jorge Martin continues alongside Zarco.

The early stages of that season are, however, likely to be critical given Martin has been spoken of as a future works squad rider, amid comments from Ducati management suggesting that Miller is/was under pressure.

Official track activity resumes next year with the Shakedown Test, for test riders and rookies, at Sepang from January 31.