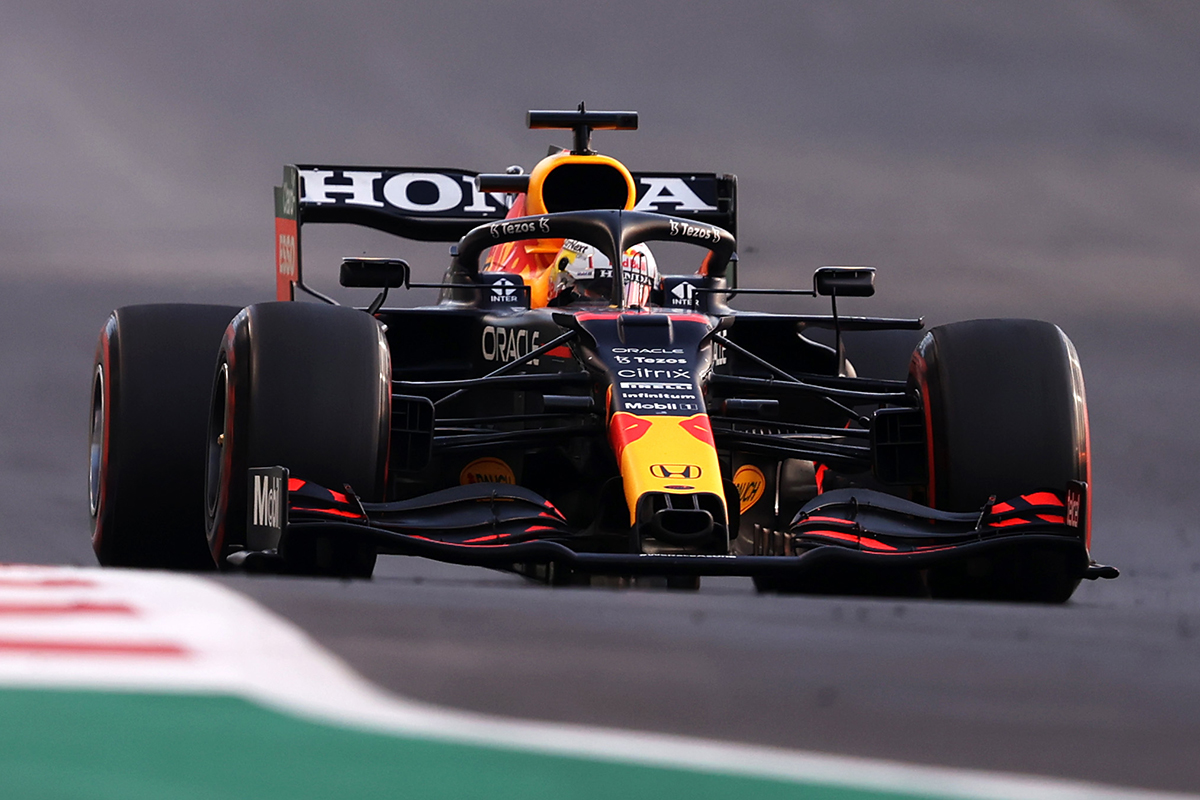 Having lost out to Lewis Hamilton off the start, and seemingly without answer to the Mercedes driver’s pace, a late Safety Car played into Verstappen’s hands.

Stopping for soft tyres, the Dutchman lined up behind Hamilton for the restart, passing him in the one-lap sprint to the chequered flag to win the world championship.

Hamilton got the better getaway at the initial start, leading the field into the first corner with Verstappen slotting in behind, followed by Sergio Perez.

The Mercedes driver skipped through the escape road, holding onto the lead in a controversial early exchange.

The stewards noted the incident, believing it required no investigation.

FIA race director Michael Masi explained to the Red Bull pit wall that, in the officials’ opinion, Hamilton had slowed sufficiently following the Turn 6 clash such that there was no lasting advantage.

It was a stance which displeased team manager Jonathan Wheatley, who claimed Verstappen was ahead at the apex and therefore entitled to the corner and position.

Having started on the soft tyres, by losing out to Hamilton at the start, Verstappen was compromised.

His strategy ideally hung on leading and extending an advantage in the opening laps before switching onto the medium tyres and circulating in clean air.

Instead, the Dutchman found himself trailing his championship rival by 2.1s, a gap which began to grow after eight laps.

Hamilton turned the screws, banking a series of fastest laps to quickly open the gap out front to the tune of a second a lap.

On Lap 14, and struggling for pace, Verstappen boxed for a set of hard compound tyres.

He emerged in traffic, slotting in between Lando Norris and Charles Leclerc in sixth, quickly using DRS to pass the McLaren and climb back to fifth.

Mercedes reacted, stopping Hamilton for a set of white-walled rubber as Perez took over at the head of affairs.

He fell to second in the process, 11.5s down on the leading Red Bull.

Leclerc had a moment as Verstappen rejoined from his stop, running off the track and falling into the clutches of Yuki Tsunoda.

On his first timed lap following his stop, Hamilton set the fastest lap of the race.

Verstappen meanwhile was tucked up behind Sainz, more than 6s adrift of Hamilton who ran second, in turn 6.5s away from the race lead.

The Dutchman was through on the Ferrari on Lap 18 at Turn 6, having missed an opportunity two laps prior when he ran off the road at the penultimate corner in turbulent air.

On Lap 20, Perez was caught by Hamilton, the Mexican refusing to cede the place despite the Brit launching an immediate attack.

The Mercedes driver found a way through on the run to Turn 6, but the Red Bull driver was playing the ultimate team game and countered the move.

He regained the lead before mounting a staunch defence for the next lap, holding up the seven-time champ enormously in the process.

It resulted in a 1:34 lap, allowing third-placed Verstappen to close in within four seconds of the lead.

Losing the place, Perez immediately stepped aside and waved his team-mate through, pitting at the end of the lap for hard compound tyres.

After 22 laps, Verstappen sat two seconds down on Hamilton, with the yet-to-stop Tsunoda third ahead of Bottas, and Perez fifth.

A braking issue for Kimi Raikkonen pitched the Alfa Romeo Sauber driver into the barrier at Turn 6, the Finn limping the car back to the lane where he switched the car off to end his F1 career.

As he did so, George Russell struck dramas as he lost drive, limping the Williams back to the pit lane and retirement.

Hamilton set the fastest lap of the race on Lap 29, his advantage having inched out to four seconds.

At Red Bull, discussions over the radio regarding Verstappen’s front wing implied they were considering a second stop.

In doing so, he removed himself from Verstappen’s pit window, opening the door for Red Bull to bring the Dutchman in if it so wished.

Hamilton out front was flying, turning in further fastest laps to continue to gradually edge away, his gap 5.1s after 32 laps.

An issue for Antonio Giovinazzi saw the Alfa Romeo Sauber driver stop on the exit of Turn 9, the Virtual Safety Car deployed to allow retrieval of the car.

Perez was also hauled in, receiving the same treatment.

The stop saw the gap from Hamilton to Verstappen increase to 17s as the VSC ended, the Dutchman with tyres some 23 laps news that his rival ahead.

Mercedes hadn’t pitted Hamilton for fear of losing track position under the VSC, prompting a series of concerned series of radio messages.

Despite that, he was able to lift his pace to meet the charging Red Bull, limiting Verstappen’s gains as the race entered its final quarter.

The gap remained at nearly 14s, Hamilton not ceding ground fast enough to be under threat in the closing stages.

Traffic for the leader saw his gap reduce to 11.3s with 10 laps remaining, Verstappen seemingly without answer to the Mercedes ahead.

A slow puncture for Norris forced a late stop, slipping to ninth as he stopped for a second time after running fifth.

Clear of the traffic, Hamilton was able to lift his pace once more, matching Verstappen’s time to place one hand on his eighth world championship trophy.

However, a final twist came when Nicholas Latifi crashed his Williams on Lap 53, drawing the Safety Car with five laps remaining.

Verstappen headed into the pits, a set of soft tyres fitted to the Red Bull as he maintained second place.

With three laps remaining, Perez came into the lane to retire the second Red Bull, all but confirming Mercedes as constructors’ champions.

Race control elected not to allow lapped cars through, leaving five cars between Hamilton and Verstappen.

It then reversed that decision, clearing the cars between the title rivals just prior to the safety car ending.

Hamilton slowed the field to a crawl, restarting as he headed under the hotel on the penultimate lap.

The Red Bull driver was locked on to the Mercedes’ rear wing, making a move at Turn 5 to take the lead and with it the world championship.

He then weaved down the back straight, Hamilton working hard to stay in the slipstream.

They went side by side into Turn 9, but he couldn’t make it stick, Verstappen holding the lead and in doing so claiming a maiden world championship.

Hamilton finished second from Sainz in third in a race that both began and ended in controversy.