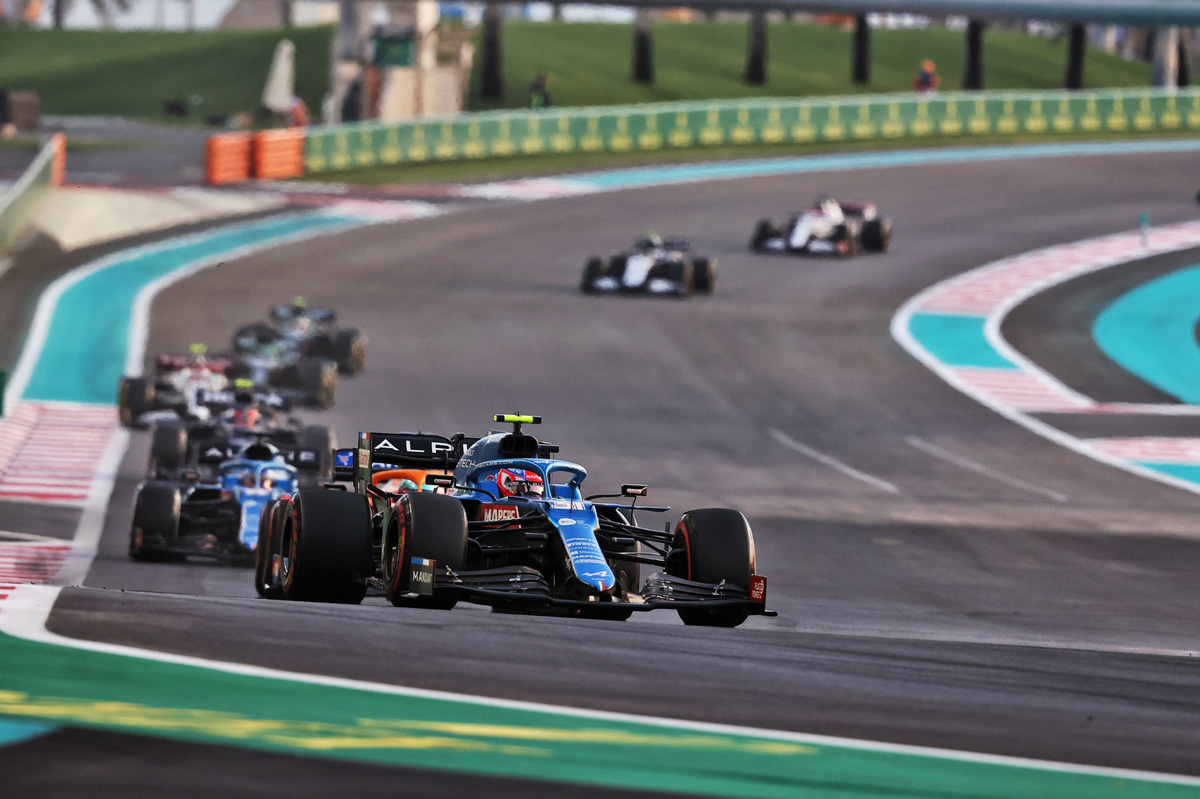 Esteban Ocon leads a train of cars at Yas Marina

The tense scrap between Red Bull and Mercedes for the Formula 1 world championship has only made Alpine hungrier to join the fight sooner than later.

The Enstone organisation has undergone a raft of changes over the years, being previously known as Lotus and Renault at various points in the past decade.

It hasn’t been a proper title contender since Fernando Alonso’s back-to-back triumphs in 2005 and 2006 though, with generally middling results ever since.

Rebranded as Alpine ahead of this year, Alonso rejoined its ranks alongside incumbent Esteban Ocon.

After a slow start to the campaign, Alpine hit its groove and picked up a shock win in Hungary for Ocon and a late-season Qatar Grand Prix podium for Alonso.

Uncertainty surrounds the 2022 pecking order thanks to an incoming drastic overhaul of the technical regulations, but Alpine CEO Laurent Rossi declared Max Verstappen and Lewis Hamilton’s “fantastic” duel has provided added motivation for his outfit.

“It was a brilliant end to a captivating year in Formula 1 and the perfect advert for what an entertaining sport we have the privilege to compete in,” said Rossi.

“The drama they created today only makes us hungrier to be up at the top of the grid fighting for wins and championships in the near future. That is our ultimate goal and we will not stop the hard work to achieve that.”

While never a frontrunning threat in Abu Dhabi, Alpine did pick up its ninth double points finish of the season as Alonso took eighth and Ocon ninth.

That helped protect its hold of fifth in the constructors’ championship as AlphaTauri made a late charge courtesy of Yuki Tsunoda (fourth) and Pierre Gasly (fifth).

“Our race today was a fitting end to what has been a very memorable campaign,” Rossi continued.

“Both Fernando and Esteban battled hard and dug deep to score double points.

“Credit to them, to the strategists, to the pit stop crew and to everyone at Enstone and Viry who has contributed to this success and consolidating fifth in the championship.

“I hope everyone in the team enjoys a good break over Christmas while we keep an eye on seizing future opportunities, especially from next year with the rule changes.

“Thanks to everyone on both sides of the Channel for a great season, capped with memorable races including Fernando’s podium and Esteban’s victory.

“We want to create more memories and moments like this and we’ll remain motivated yet humble in achieving our targets.”

Alonso and Ocon will remain as Alpine’s race drivers in 2022 while Formula 2 champion Oscar Piastri is elevated to be the team’s official reserve driver.