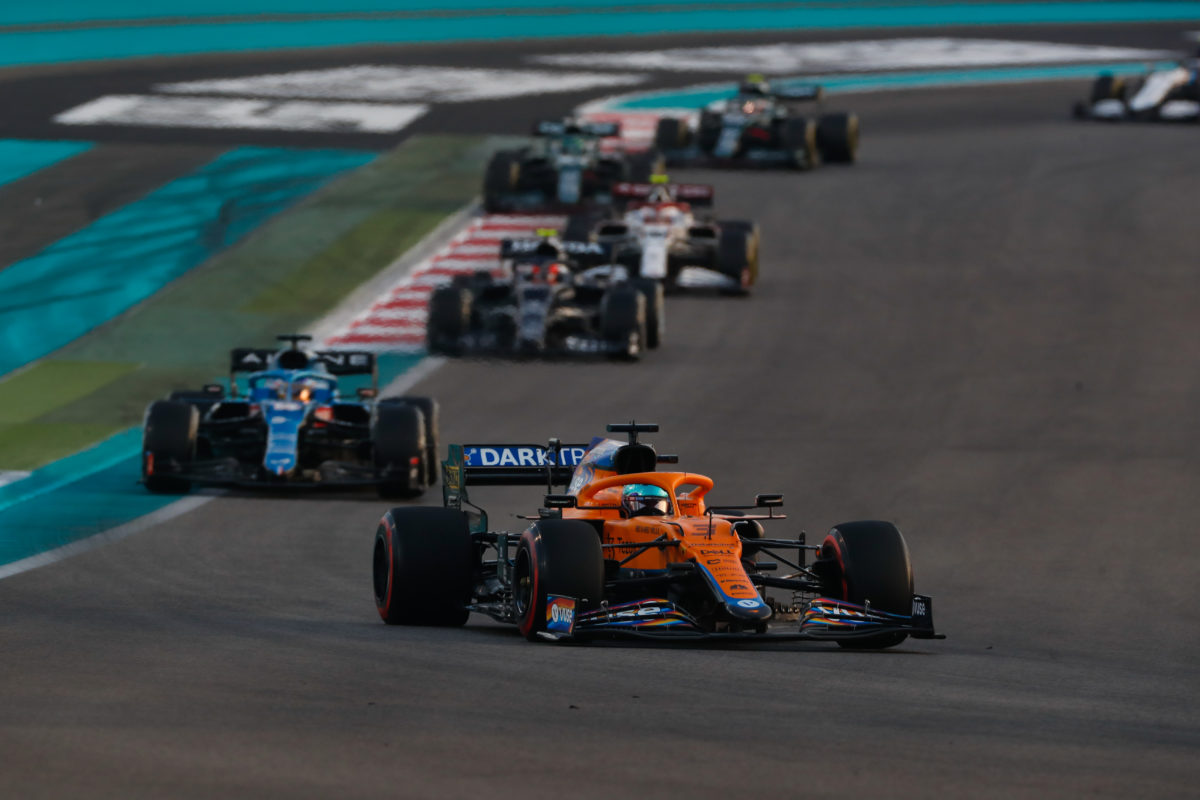 A lack of pace in qualifying translated into an unimpressive Sunday for Daniel Ricciardo at the Formula 1 Abu Dhabi Grand Prix.

The Australian ended the controversial championship decider a lap down in 12th, a result largely attributed to starting down the order.

“He couldn’t show the pace because he was just stuck in the [DRS] train behind [Esteban] Ocon for most of the race,” McLaren boss Andreas Seidl said when asked about Ricciardo’s performance by Speedcafe.com.

Ricciardo progressed through to Qualifying 3 on Saturday, setting the slowest time of the segment to take 10th on the grid.

He then held that spot until his pitstop on Lap 18, spending the first 14 of those tucked up behind Ocon.

“As we know, Formula 1 how it is nowadays with these cars, on tracks like here, if you’re not a lot faster than the car in front of us, it’s difficult to overtake and your race is pretty much done from the start,” Seidl explained.

“And with Daniel not able to make up positions at the start, or in the first lap, his race was pretty much done, unfortunately.”

Ricciardo shared his bosses view, lamenting his inability to clear the Alpine in the early stages, finding himself parked behind again following the pit stop cycle.

“I felt like I had a bit more pace than them, but it was honestly just really tricky to overtake,” he said of challenging Ocon.

“We tried to stick it out but with the Virtual Safety Car we lost positions.

“I think in clear air I would’ve had a bit more pace to show, but it was just tricky with track position.

“That’s what happens when you qualify a little too far back.

“Something I want to improve next year is the performance on Saturdays, and I think that’ll make the Sundays a bit easier.”

McLaren ended the season fourth in the constructors’ championship, one spot down on where they ended the 2020 campaign, but with a far greater points tally.

Even still, it could have been higher in Abu Dhabi were it not for a slow puncture, caused by a kerb, for Lando Norris.

The Brit was running fifth before a Lap 48 stop to remedy his deflating Pirelli dropped him to eighth.

That became seventh courtesy of Sergio Perez’s late retirement but could easily have been fourth, which would have been enough for Norris to steal fifth in the drivers’ championship from Ferrari’s Charles Leclerc and Carlos Sainz.

In the end, he fell short of that marker, ending the 58-lap affair seventh after starting third.

“The race was going very well, I was keeping up with the Ferrari, the pace was pretty strong and then we had a slow puncture, which just took us out of the race and I lost a lot of points and a lot of positions because of that,” Norris said.

“I feel like I drove a solid race and it was just unfortunate again.

“There’s nothing we could’ve done, but I think we should still be happy with the way we ended the season,” he added.

“We weren’t quite quick enough at times, but that’s not down to a lack of effort.”

In the end, Norris was the first of five cars waved by Hamilton ahead of the final restart, together with Fernando Alonso, Ocon, Charles Leclerc, and Sebastian Vettel.

The McLaren driver was officially classified 59.2s down on the race leader in seventh.