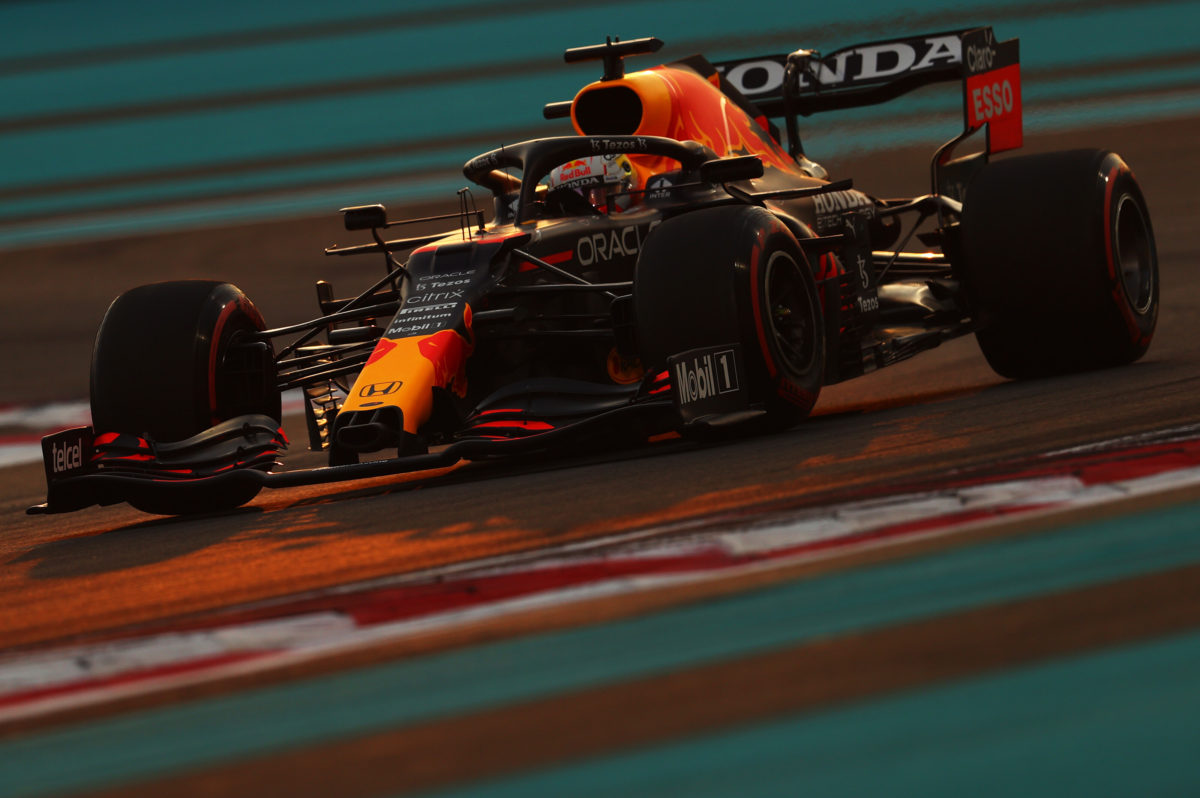 Verstappen was almost 0.4s clear of Hamilton at the end of the session.

However, the duo will start Sunday’s race on different compound tyres, a point of difference that could prove decisive.

Between qualifying and final practice, work had been carried out on the rear wings on both Verstappen’s and Perez’s cars.

That saw them both out early, in the latter’s instance sporting a low downforce wing for the first time of the weekend.

The Mexican was the first to set a timed lap, recording a 1:24.253s to open proceedings.

Pierre Gasly underscored AlphaTauri’s potential by clocking a 1:23.967s to slot into second.

It left the lead Mercedes a comfortable 0.4s clear of Verstappen after their first runs.

It left just 0.056s between the two title protagonists, Bottas just half a tenth further back in third.

A red flag was thrown shortly after Lando Norris logged a 1:23.553s, the McLaren having tagged a bollard exiting the final corner, depositing it not far from the racing line exiting the right-hander.

Mick Schumacher had initially dislodged the bollard from the apex of the corner, Norris then running over it as the next car on the road.

It left 6:25 on the clock, the session quickly resuming once the stray bollard was retrieved.

The busy restart saw Esteban Ocon appear to baulk Sebastian Vettel, the German languishing in 16th and the first car in the elimination zone at the time.

It was a moment noted by officials who then confirmed they would investigate post-session.

Confidence in the final moments of Qualifying 1 at Red Bull was such that Verstappen remained in the garage, mechanics under his car examining the floor of the RB16B.

Hamilton was on track early in Qualifying 2, a set of yellow-walled medium tyres fitted to his Mercedes.

He recorded a 1:23.185s with his first lap, all but matched by Verstappen who soon after logged a time just 0.004s slower.

Bottas slotted in third with his first push lap in the segment, followed by Tsunoda and Norris, all on the medium rubber.

Daniel Ricciardo meanwhile in the second McLaren had a set of the softs fitted, the Australian running slightly off-sequence to his team-mate.

Also on the soft tyres were the Ferrari duo, Carlos Sainz rising to the top of the timing sheets while Charles Leclerc slotted in behind Verstappen in fourth.

On his second run, a lock up at Turn 1 for Verstappen left him with a flat spot on his front-left tyre.

With three and a half minutes left in the segment, the remaining runners headed back out on track for a final flying lap.

It created something of a traffic jam as drivers jockeyed for track position.

Such was the jostling for position that timing screens lit up with cars having ‘stopped’ on track.

It also produced a brief double waved yellow flag as Vettel came to a complete stop.

Perez shot to the top of the timing screens with his final lap, the Mexican doing so on a set of the soft compound tyres.

It locked the two Red Bulls to the soft tyres for the start of Sunday’s race, while Mercedes will roll out on the medium rubber.

Ricciardo snuck though into Q3, pushing Fernando Alonso into the elimination zone, where he joined Gasly, Lance Stroll, Antonio Giovinazzi, and Vettel.

After Qualifying 2 concluded, officials announced they would investigate an incident between Alonso and Ricciardo at the end of the segment, the Alpine driver seemingly baulked by the McLaren.

Red Bull sent both Perez and Verstappen out line astern as Qualifying 3 began, the Dutchman appearing to use his team-mate for a slipstream down the back straight.

The Mexican abandoned his lap into Turn 9, releasing Verstappen as he sacrificed himself.

It afforded the championship leader clean air through the final sector, recording a 1:22.109s.

Perez carried on for another lap to log a 1:22.968s to sit third, aided by a tow from Verstappen, pushing Bottas to fourth.

With three minutes to run, the last 10 runners headed back out for one last flying lap.

Mercedes was at the head of the train, while Red Bull were further back, its two drivers again running in close proximity to one another.

A tidy lap from Hamilton saw the Brit improve to 1:22.480s, closing the gap to Verstappen but unable to pip his title rival.

Behind him on track, Verstappen was improving, only to abandon the effort in the final sector.

Norris claimed third for McLaren, with Perez alongside him on the second row.

Bottas will start sixth in the second Mercedes, one spot back from Sainz, the top 10 rounded out by Leclerc, Tsunoda, Ocon, and Ricciardo.

The Abu Dhabi Grand Prix gets underway at midnight AEDT on Sunday night.