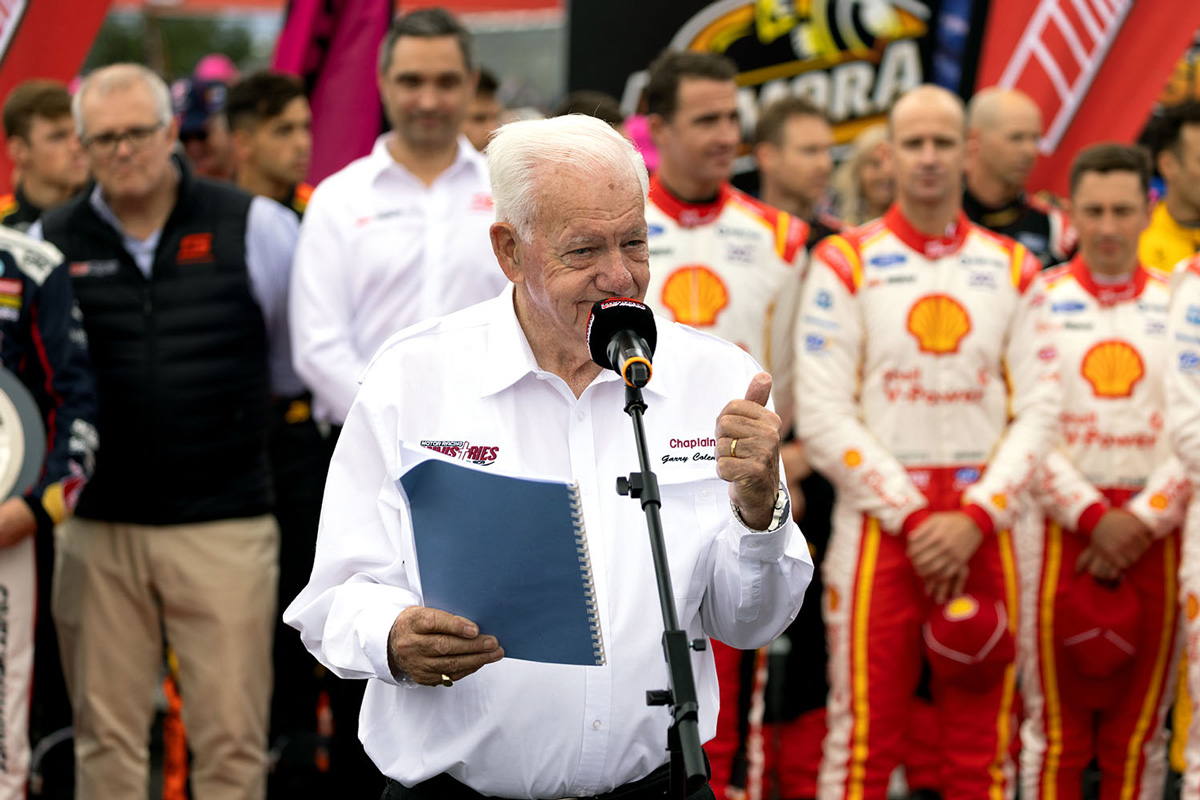 It was at roughly this time last week that the chequered flag flew on Garry Coleman’s final race as the official Supercars chaplain.

A stalwart of the sport, the Motor Racing Ministries figurehead made an emotional last prayer in the moments leading up to the 2021 Bathurst 1000.

Speedcafe.com caught up with the 80-year-old, for whom tributes have flowed thick and fast. A Super Auction paying tribute to Coleman, run through Lloyds Auctions, is running until Tuesday night, December 14.

Speedcafe.com: How do you look back on the past few weeks since announcing your retirement?

Garry Coleman: I’ve been amazed from all of the responses I have been getting from people within the sport and my own chaplaincy team and colleagues. It’s going to be an emotional thing but also very fulfilling and satisfying to see that I can step back… and my team of 53 chaplains and growing are doing all that they’re doing across the country.

Speedcafe.com: What actually led you to become so entrenched in motorsport?

Garry Coleman: Well, I began as a motor mechanic apprentice back in 1959, and continued doing that. As a mechanic, I also ended up managing a service station when I was just 21 years of age and running the workshop in Woolloomooloo in Sydney. So my feet were in motorsport, in the industry, and then when I went into children’s work and then into Christian ministry, I was watching it at a distance. And then when Sports Chaplaincy began in 1985, I heard that they were expanding out of cricket and rugby league and tennis, so I put my hand up and became the first motor racing chaplain in 1986, the first of five chaplains in Sports Chaplaincy Australia, which now has almost 800 chaplains across the country with requests for over 6000. One of the things is, there is a duty of care in all kinds of sport and that has expanded with the number of sports that have become very concerned about the number of teenage suicides and recognise the need for a chaplain or a people care person to be on-hand as their own chaplain or having access to a chaplain.

Speedcafe.com: So yeah, your role clearly runs much deeper than what people might see of you on television, reading the prayer on Sunday morning of Bathurst…

Garry Coleman: We now have, thanks to the Bathurst council two years ago, a chaplains’ unit that they put together, a demountable, right next to the door of the medical centre at Bathurst where we can now be on-hand immediately or talk to family members or crew members while someone is being attended to. One of the things of having two or three chaplains there, is if there is a need for someone to go to the hospital, then one of us can take family members or crew members and then visit throughout the day or the weekend while someone is in hospital. And where if something serious has happened and they may be transported to Sydney, then my network of chaplains in Sydney would visit those hospitals on the weekend and we would follow up with those, wherever they are at home. So our network behind the scenes, no matter where a driver or official comes from, we have got access to chaplains to follow up with family members when they return. But yes, most of what we do is often behind the scenes and away from the track.

Speedcafe.com: And even the pre-race prayer, it all runs far deeper than religion, doesn’t it?

Garry Coleman: Well, an illustration I have used before and people like Tim Schenken will not mind it; when the chaplain turns up, the Clerk of the Course relaxes because we look after all of the people stuff.

Speedcafe.com: I know you are staying on in some roles like with the Sydney Speedway, but beyond that, what’s next for you?

Garry Coleman: I will still be overseeing the 53 chaplains we have got as the national coordinator, but looking forward to watching Supercars on Foxtel and also constantly being in touch with our men that are at tracks around the place. The toll that dealing with the traumas such as the big rally last year [the 2021 Targa Tasmania] with the three fatalities – as chaplains, we actually know the effect it has on us. There is always a price that is paid emotionally and spiritually when dealing with these things and we need to make sure we look after each other.

Speedcafe.com: Has someone officially been designated as your successor as Supercars chaplain?

Garry Coleman: We have three others who are acting now. One is Ian Young, who looks after Victoria; and Charlie Sandham, who does Queensland, doing also Townsville and Darwin; and Steve Peach, who is the chairman of our council and he and Charlie also will be doing Bathurst from here on as they have done for the last two or three years.

Speedcafe.com: Well, Garry, thanks so much for your time and for all your contributions to the sport. Any last words?

Garry Coleman: Just that I’m looking forward to spending more time with my wife Betty. When I first took on the Supercars network, I was away 15 times a year and she was at home supporting me and praying for me with all of that.