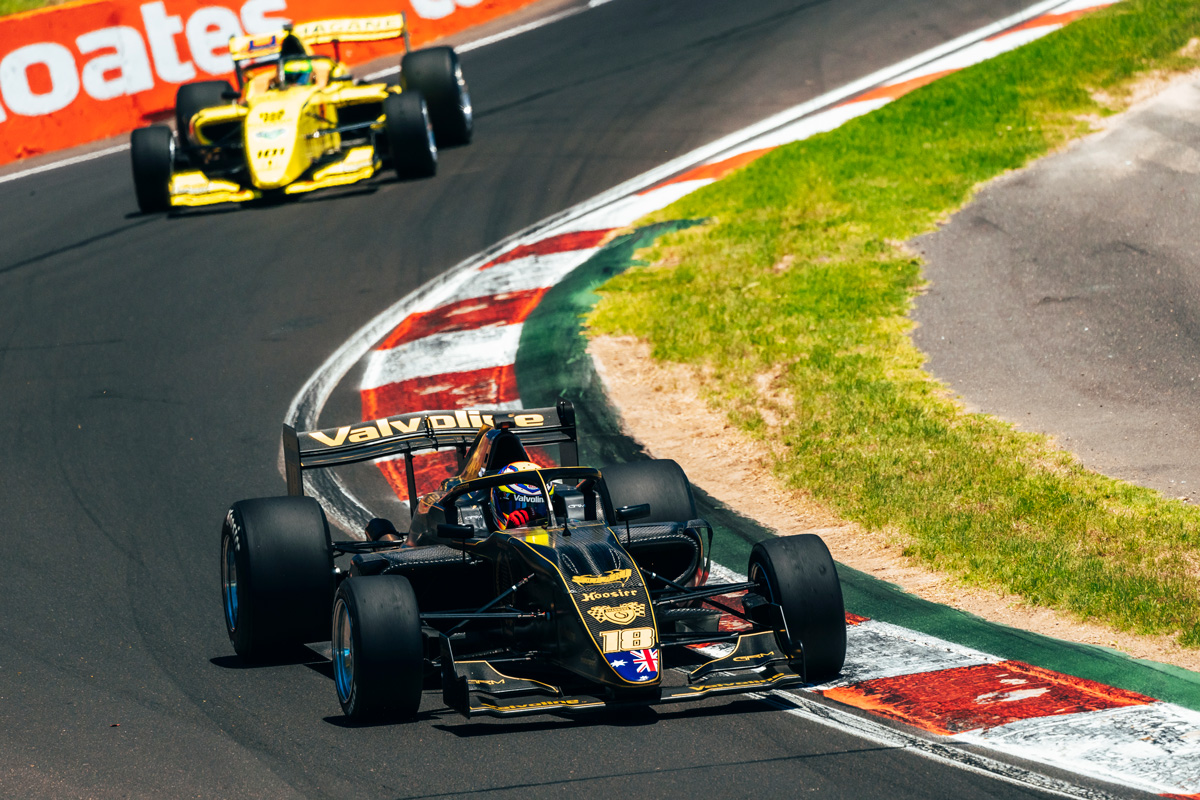 Aaron Cameron admits his path to being the inaugural Shannons S5000 Tasman Series winner did not end in the way he would have liked.

A pair of podiums in the first three races of last week would ensure he carried a 22-point advantage into the decider.

That’s where things would go awry, Cameron stalling on the grid and then tangling with Garry Rogers Motorsport team-mate Nathan Herne.

He’d just stay on the lead lap, only to then be involved in a high-speed collision at The Chase with Luis Leeds.

That would trigger red flags and ultimately the race to be abandoned with no points awarded; effectively protecting his status atop the standings.

Cameron was later slapped with a 15-point penalty for the Herne incident but escaped punishment for the coming together with Leeds, and thus hung onto the title by a mere seven points.

“Obviously it’s not the way any of us wanted to finish,” Cameron told Speedcafe.com.

“I think our races were meant to be 11 laps, that’s all I wanted all weekend, was just a clean race in the cars to get it done.

“At the start nothing went right and then obviously me and Luis had that big tangle at The Chase which sort of finished it all off for us.

“After the race everyone was making sure I was alright, which I was fine… it really does show how safe the cars are.

“As a team, all we wanted was someone in GRM to win the championship at the end of the day.”

Sunday aside, it was a “very positive” week on the whole for Cameron – with his 1:59.9340s qualifying lap a highlight.

“That was very special; even now, when you look back on it, thinking that not many people have done it full stop,” the 21-year-old reflected.

“Then looking at the fact that it was qualifying – I don’t rate myself super highly in my qualifying strengths – to be able to do that in a still pretty foreign car to me, to get pole and go under the two-minute barrier against the likes of Jimmy [Golding], Nathan, Joey Mawson, Roberto [Merhi]… the grid is just stacked and to get it done over them was absolutely awesome.”

Unlike Golding, Herne, Mawson and co, Cameron was quite fresh to the S5000 machinery having not taken contested the 2021 Australian Drivers’ Championship.

That fact made his ability to be on the pace straightaway all the more impressive.

“The first test when Garry gave me a bit of a taste of it I did about 10 laps and straightaway I felt pretty comfortable and I knew what was going on,” said Cameron.

“I think the Supercars test I did with Walkinshaw Andretti United, that certainly helped, because the cars aren’t too dissimilar; like, the driving styles are similar, I found.

“So when we went to Winton for the first test, I was actually pretty comfortable with the braking markers and acceleration points because they were pretty similar to the Supercar.

“It is quite different to a TCR, but I was pleasantly surprised how quickly I picked it all up.”

Cameron also secured second in the end-of-year TCR standings after a Mount Panorama event in which he backed up victory in Race 1 with a pair of runner-up finishes.