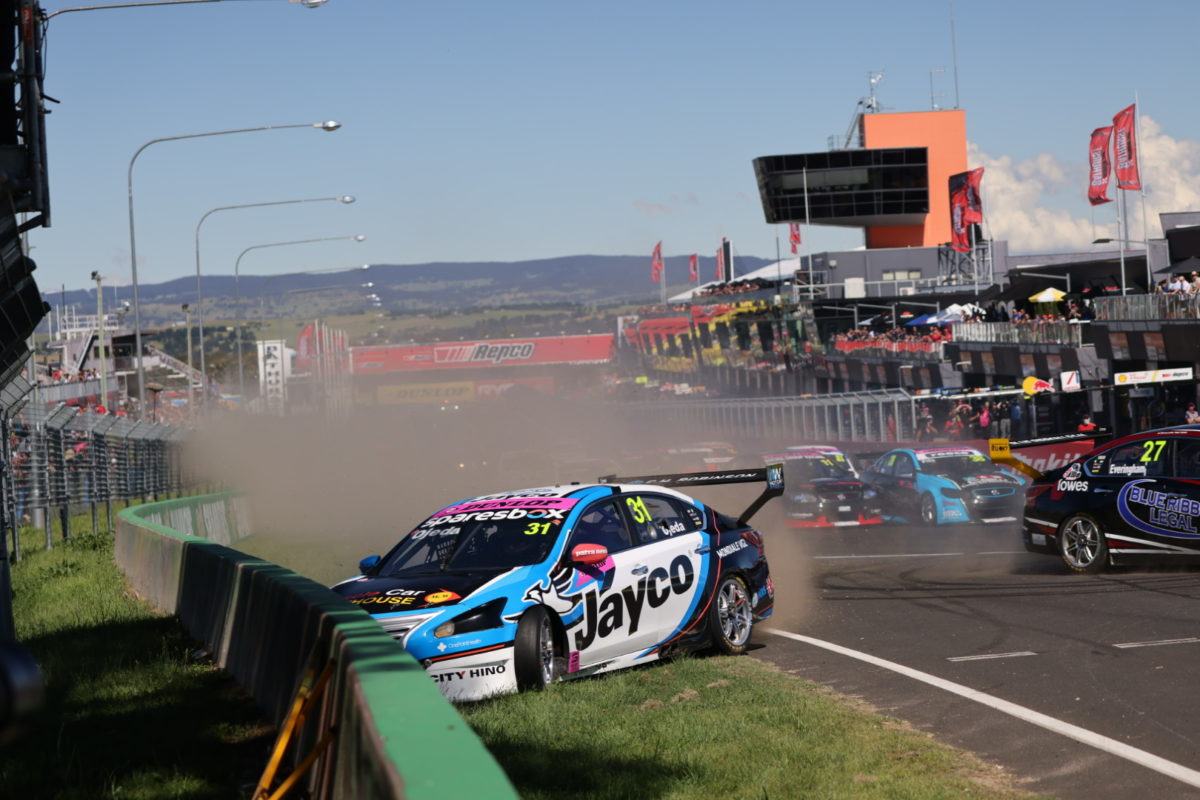 Jayden Ojeda off the track after contact with Tyler Everingham

Jayden Ojeda has accepted blame for an intra-team clash which finally brought an end to his Dunlop Super2 Series title hopes at Bathurst.

The MW Motorsport driver was one of two remaining title contenders ahead of the final race of the season, from which he would start on the outside of the front row.

However, he was very much an outside chance given Triple Eight Race Engineering’s Broc Feeney, who had earned fifth on the grid, needed only to finish Race 2 of Round 5 to ensure he won the series.

The title became a foregone conclusion almost as soon the race got underway, as Ojeda moved across on team-mate Tyler Everingham on the run to the first corner.

The contact caused Ojeda to be unloaded to drivers’ right before he eventually parking at the top of the mountain with a puncture, while Everingham’s race ended in the gravel trap on the outside of Hell Corner.

As a result, the former dropped back to third in the series all-told, behind Tickford Racing’s Zak Best.

“Unfortunately, the final round of the 2022 season didn’t go our way,” said Ojeda, who finished second to Feeney in Race 1 of the weekend at Mount Panorama.

“I broke the first rule of having team-mates, which is don’t crash into them, as unfortunately I crowded Tyler a bit too much and then we had contact.

“I had a puncture and he got stuck in the gravel as I apologised to the team.

“It’s been a good season for us at MW Motorsport for 2021; it was disappointing we couldn’t round out second or the win if other things worked out our way this season.”

Everingham’s DNF saw him drop from fourth to sixth in the standings, after a season in which he won two races but was on the back foot due to a DNS in the very first race of the year.

“I’ve had a tough weekend,” he admitted.

“We had a fast car the whole time but we just struggled with luck and to make it happen.

“Coming from the first race at Bathurst where we had a DNS, it was tough to come back from that, but we were fourth in the points coming back here, which was impressive from zero points at the start of the year.

“It would have been good to finish it off with a result for our guys, but definitely looking forward to 2022 to see what it brings.”

MW Motorsport was already down to two Nissan Altimas for Race 2 after Declan Fraser crashed heavily in practice when he lost a wheel nut.

He had been in contention for the year’s rookie honours but ultimately ended up eighth, three positions behind fellow first-season driver Matt McLean.

“We didn’t make it to qualifying this week, which is a bit of a shame,” said Fraser.

“Looking back on our season, I’m pretty happy with the progress we’ve made and MW Motorsport has been great in my development.

“Coming into this round, we came off the back of a good result in Sydney [first ever podium], though we didn’t make it to qualifying.

“But, credit to the safety of these cars I came out unscathed and I’m looking forward to 2022.”

Ojeda, last year’s leading Super2 rookie, would go on to crash out of the Repco Bathurst 1000 while running 11th, after he and primary driver Zane Goddard had combined to take the #35 Matt Stone Racing entry as high as ninth on merit.

Ojeda has been linked to Walkinshaw Andretti United for the 2022 Super2 campaign, as reported by Speedcafe.com, although the team was non-committal when approached for comment on a potential return to the series.

There was already change in the MWM ranks before the season finale when Josh Fife switched to Eggleston Motorsport, as revealed by Speedcafe.com, although he is not believed to be locked into that team for next year as it stands.