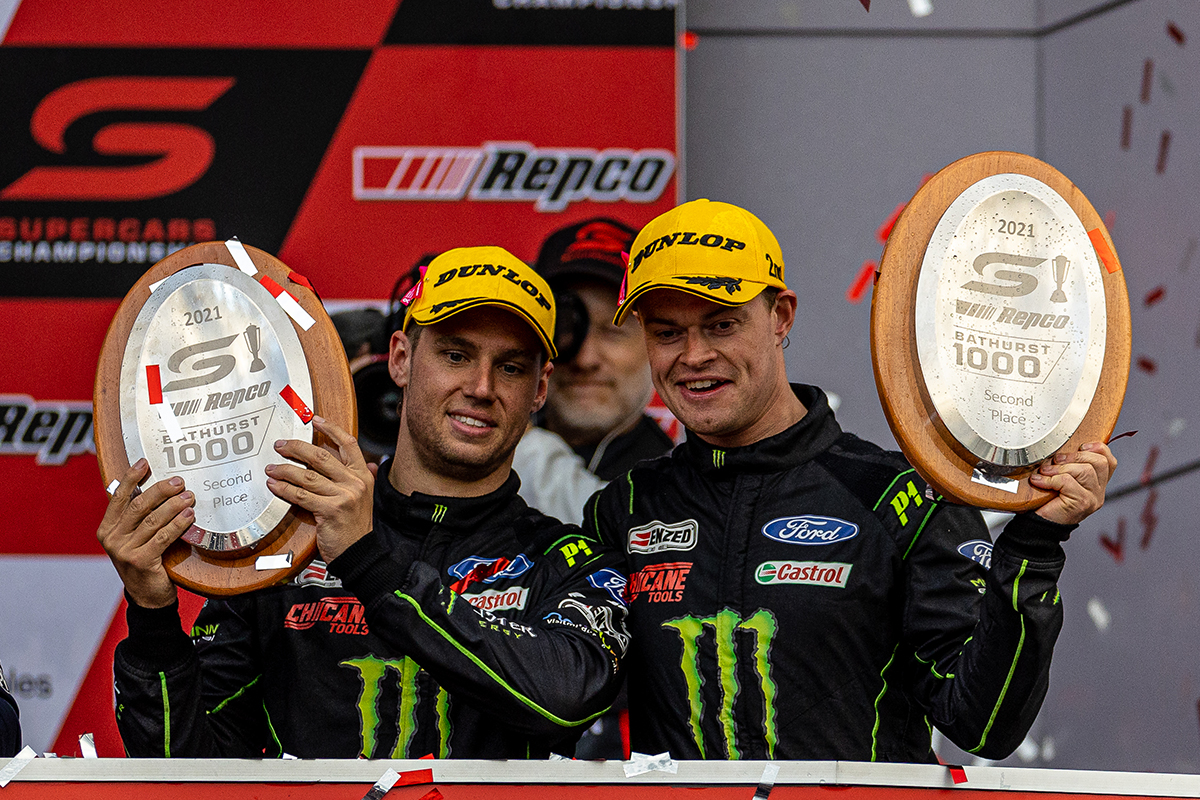 Just not fast enough. That was the sentiment in the Monster Energy Racing garage after Cameron Waters and James Moffat finished second in the Repco Bathurst 1000 for the second straight year.

The pair were competitive throughout the four days of on-track running at Mount Panorama, but simply couldn’t match the pace of the race-winning #25 Walkinshaw Andretti United pair of Chaz Mostert and Lee Holdsworth.

Waters and Moffat found themselves in third after the final Safety Car restart and would move to second after a tyre failure for the #888 of Shane van Gisbergen and Garth Tander.

In the end, the #6 would come home 3.7s adrift of the race winners, marking back-to-back second place finishes for Waters.

“It’s bittersweet, I guess,” said Waters, who finished runner-up to van Gisbergen and Tander in the 2020 edition.

“To stand on the podium here is pretty special, but coming second two years in a row, it’s tough not being on the top step.

“It could be worse, we could’ve had a tyre fail with five laps to go and be nowhere, but we come here to win. And while it’s great to have a trophy, it’s not the one we were after.

“We didn’t have the fastest car today, so I think we capitalised on the car speed we had and made the most of what we had.

“Moff did a good job, he’ll say his first stint wasn’t too great but his second stint was mega and really helped.

“Car was fast, pit stops were awesome, everyone just did a great job and I think we maximised what we had today.”

It was a slow start by their standards, Moffat falling from third to ninth at the end of Lap 1.

Waters would get them firmly back into podium contention in his first run before Moffat maintained that placing in his second stint.

Ultimately, their Ford Mustang just didn’t have the pace to match the leading Holden Commodore.

Second, in the end, was the best they could do.

“I lost the clutch at the start of the race, and obviously went backwards pretty quickly so that made it pretty hard for us in that first stint, it was pretty scrappy,” said Moffat.

“But fortunately Cam was able to get back track position for us in the second stint, and from there the race was pretty straightforward for us, really.

“The car speed was basically what it was, and nobody was touching the guys in the middle [Mostert and Holdsworth] today, their car was incredible,” he said.

“I feel like everybody at Tickford did an amazing job, the pit stops were flawless, and my buddy [Waters] sitting next to me drove the absolute wheels off it and didn’t put a wheel wrong.

“Second was probably the maximum we could get out of the car, we just couldn’t find that sweet spot with the car the whole weekend, but Cam summed it up pretty well; bittersweet.

“We’ve finished second twice in this bloody race, so it’s good, but not good.”