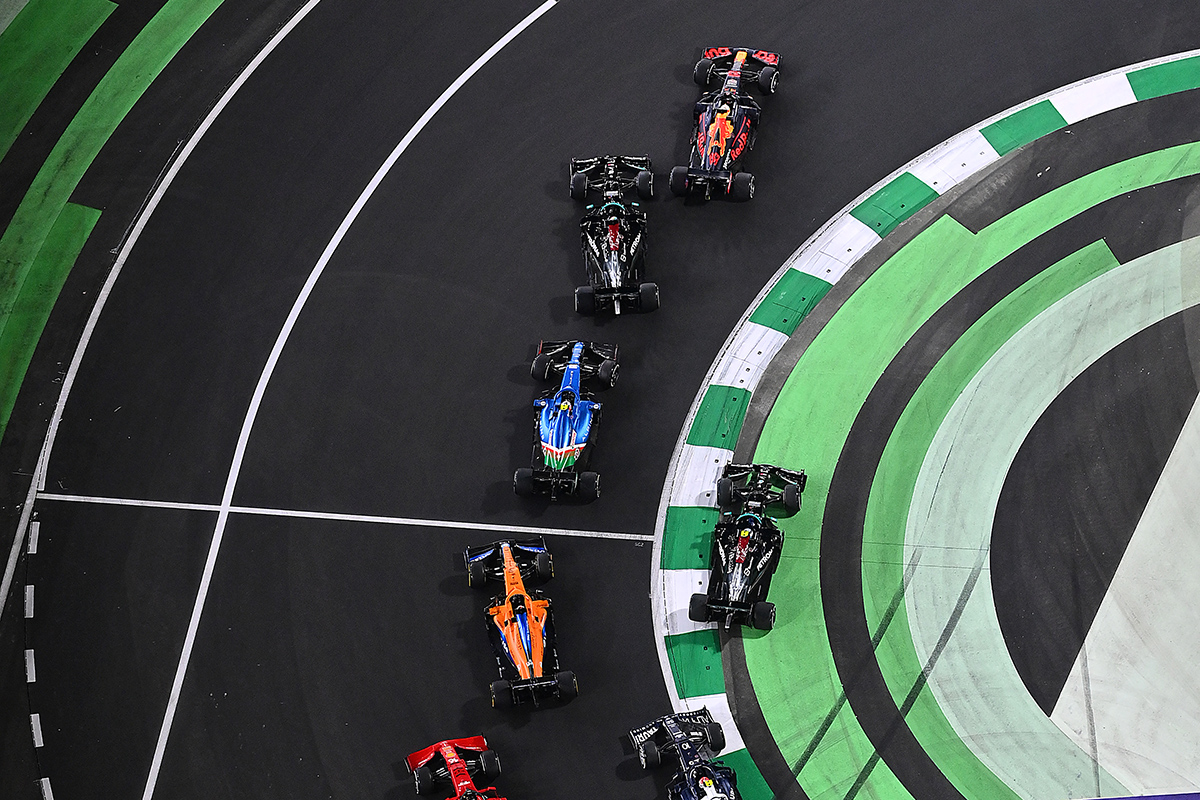 Saudi Arabian Grand Prix winner Lewis Hamilton has suggested the rules of engagement for Formula 1 drivers are clear to all bar one.

Hamilton is locked in battle with Max Verstappen for the world championship with just one race remaining in a scrap that has seen both lead the competition at times.

It’s also witnessed a number of on-track moments which, for the most part have been dismissed as hard but fair racing.

However, that turned ugly in Saudi Arabia, where the pair clashed a number of times before making contact on Lap 37 for which they were summoned to the stewards’ post-race.

Under attack from Hamilton, who’d drawn alongside of Verstappen down the front straight, the Red Bull driver appeared to have a moment as he turned into the corner, correcting an oversteer moment.

That appeared to escort him off the road, and with his title rival alongside with nowhere to go but to follow him.

It follows on from the Sao Paulo Grand Prix where the duo battled on track, running wide at Turn 4 in a controversial move for which Verstappen was not penalised.

“I don’t think I’ve changed the way that I race,” Hamilton responded when asked if he’s changed something in his racing over the course of the season.

“I think we’ve seen multiple instances this year where, even like with Brazil, where we’re supposed to do our racing on track in between the white lines.

“The rules haven’t been clear from the stewards, that those things have been allowed, so that’s continued.

“From my understanding, I know that I can’t overtake someone and go off track, and then keep the position.

“I think that’s well known between all of us drivers, but it doesn’t apply to one of one of us, I guess.”

His remarks were a clear shot a Verstappen who, prior to their Lap 37 clash in Jeddah, ran off the road at Turn 1, maintaining the race lead in the process – for which he was handed a five-second time penalty.

However the Dutchman, who was sat alongside Hamilton as the Brit made his remarks, refuted the suggestions.

“I find it interesting that I am the one who gets a penalty when both of us run outside of the white lines,” he argued.

“You know, in Brazil, it was fine, and now suddenly I get a penalty for it.

“You could clearly see both didn’t make the corner, but it’s fine.

“I mean, I also don’t really spend too much time on it, you know. We have to move forward.”

Making matters worse was the clumsy manner in which Verstappen attempted to allow Hamilton through to lead as they approached Turn 27.

Caught by surprise, the two made contact in one of the most controversial moments in recent seasons.

It was a matter referred to the stewards, who duly handed out a 10-second time penalty post race – a largely ceremonial ruling given it makes no material difference to the final race classification.

“It really wasn’t clear,” Hamilton said when asked why he didn’t simply pass his slowing rival.

“So there’s two two scenarios; there’s one that it wasn’t clear; two, I didn’t get the information.

“Then it became apparent that he was trying to let me pass which was what he, I guess, had been asked to do.

“But [he did it] before the DRS zone and so then he would just DRS back past me coming through the last corner; follow me and just DRS me into Turn 1.

“That was a tactic, but I think really the worst part was just the steep, heavy braking that then happened at one point,” he added.

“That’s where we collided. That was the dangerous part.”

Ironically Hamilton has adopted similar tactics in the past when instructed to give back positions, and cited the 2008 Belgian Grand Prix.

“I was fighting Kimi into the last corner of the Spa chicane, and he ran me wide and I went across the chicane and had to led him back past, but overtook him straight away,” he recounted.

“I remember Charlie Whiting telling the team that it was okay.

“[Kimi] didn’t finish the race but then getting a, I think it was a 10-second, or whatever it was, 20-seconds or whatever… and finishing third.

“Obviously I knew that Max had overtaken two of us by going over Turn 2 which at the beginning of the race we were told that wasn’t allowed.”

That moment came at the restart following the first red flag, and saw Verstappen move beyond Hamilton, who was pushed wide as the Red Bull rejoined, opening the door for Esteban Ocon to slot into second.

When the race was then red flagged a second time soon after, FIA race director Michael Masi gave Verstappen’s team the opportunity to reposition behind Hamilton in a net third.

The outcome of the controversial event is that both title protagonists are now tied on points heading into the last race of the year in Abu Dhabi, which begins on Friday.