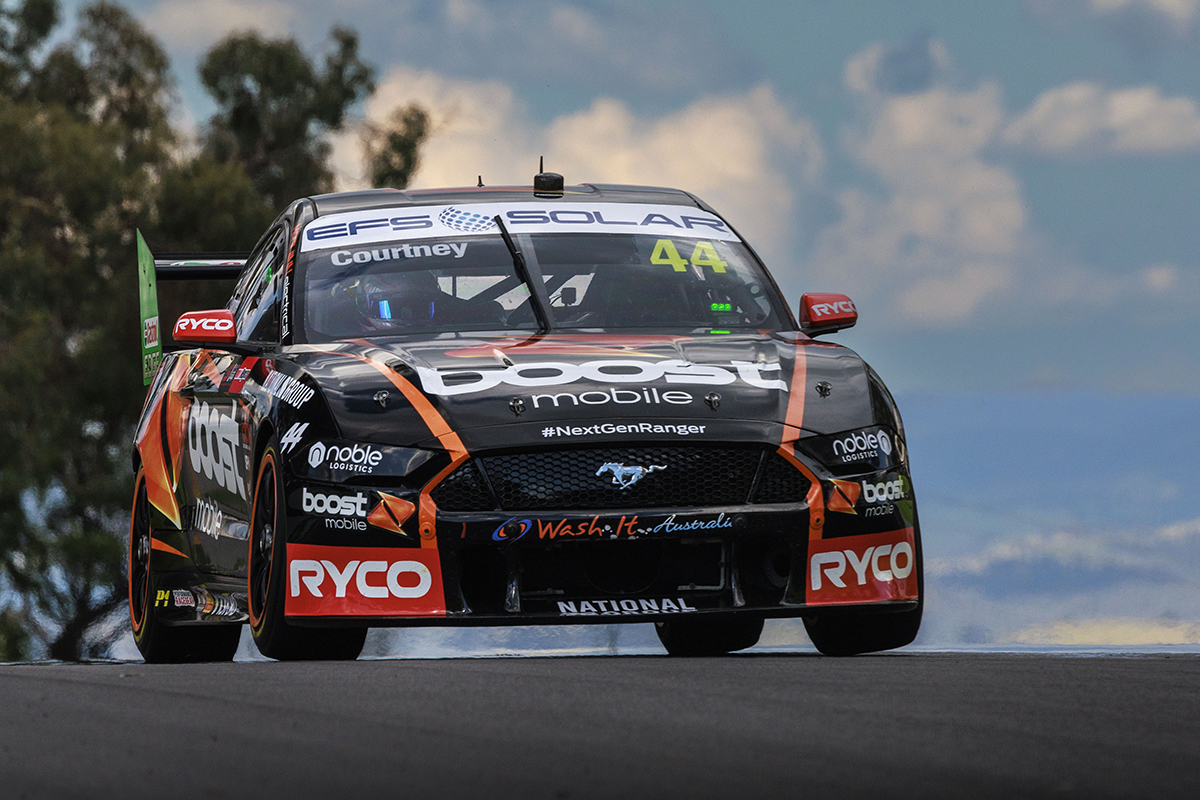 Tim Edwards has hailed James Courtney’s drive from a lap down to seventh in the Repco Bathurst 1000 for saving Tickford Racing from falling to fourth in the teams’ championship.

In the end, finishes of second and seventh for the #6 and #44 entries respectively were enough for the Ford squad to secure third. However, it almost wasn’t to be.

The #44 was responsible for bringing out the first Safety Car in this year’s 161-lapper after Thomas Randle buried the Boost Mobile Mustang in the gravel at Hell Corner.

That would see Randle and Courtney go a lap down, where they would languish for the lion’s share of the race.

Only with 53 laps to go would Courtney get back on the lead lap when the Safety Car was drawn for just the second time in the race, thanks to an echidna.

Another intervention shortly thereafter would bring them back onto the rear of the lead lap, at which point Courtney began to make headway.

The final stanza of the race would see Courtney rise from 19th to eighth in less than 20 laps.

Courtney then gained another position at the death when the second placed #888 of Shane van Gisbergen and Garth Tander suffered a tyre failure and fell to 18th.

The #6 of Cameron Waters and James Moffat were also benefactors of the tyre failure, moving to second.

“JC and Thomas hung in there all day and got a really solid seventh after spending almost the entire race a lap down,” said Edwards, Tickford Racing CEO.

“JC’s charge in the last couple of stints ended up saving us third in the teams’ championship which is a big deal, so they deserve a lot of credit for their resilience.”

Randle also heaped praise on Courtney for getting the #44 out of a sticky situation following his earlier misdemeanour.

“I’m really frustrated with myself for what happened early in the race, but so proud of JC and the Boost Mobile Racing crew for battling back and recovering to a really solid result for us,” said Randle.

“As for my off, I had a bit of a vibration in the car just before and when I went into Hell Corner the car just wouldn’t turn.

“In hindsight, I should have taken it easy for a bit there, but once I knew I was gone I just did my best to minimise the damage, and fortunately it wasn’t that bad.

“It’s pretty crazy to think we spent almost the entire race off the lead lap and still ended up seventh, but I guess that’s what this place does.

“Just a huge credit to JC and the boys for fighting through, I’m gutted to have put us behind but really happy we could get a decent result out of it.”

Like a lot of drivers who finished off the podium, it was a bittersweet end for Courtney having had a competitive car all day.

“It was a tough day to get to seventh, obviously we had our set back but to come back through the field was awesome,” he said.

“Brad [Wischusen, engineer] did a great job getting us back on the lead lap and then it was just driving through the field and passing people which was a lot of fun and shows how strong a car we actually had.

“We definitely did it the hard way, but it’s a credit to the team and the boys on my car for sticking with it, and in the end it got us third in the teams’ championship which is really good, so a busy day but a good result in the end.”

Courtney ended his season 11th in the drivers’ championship while team-mates Waters and Jack Le Brocq were fifth and 16th respectively.