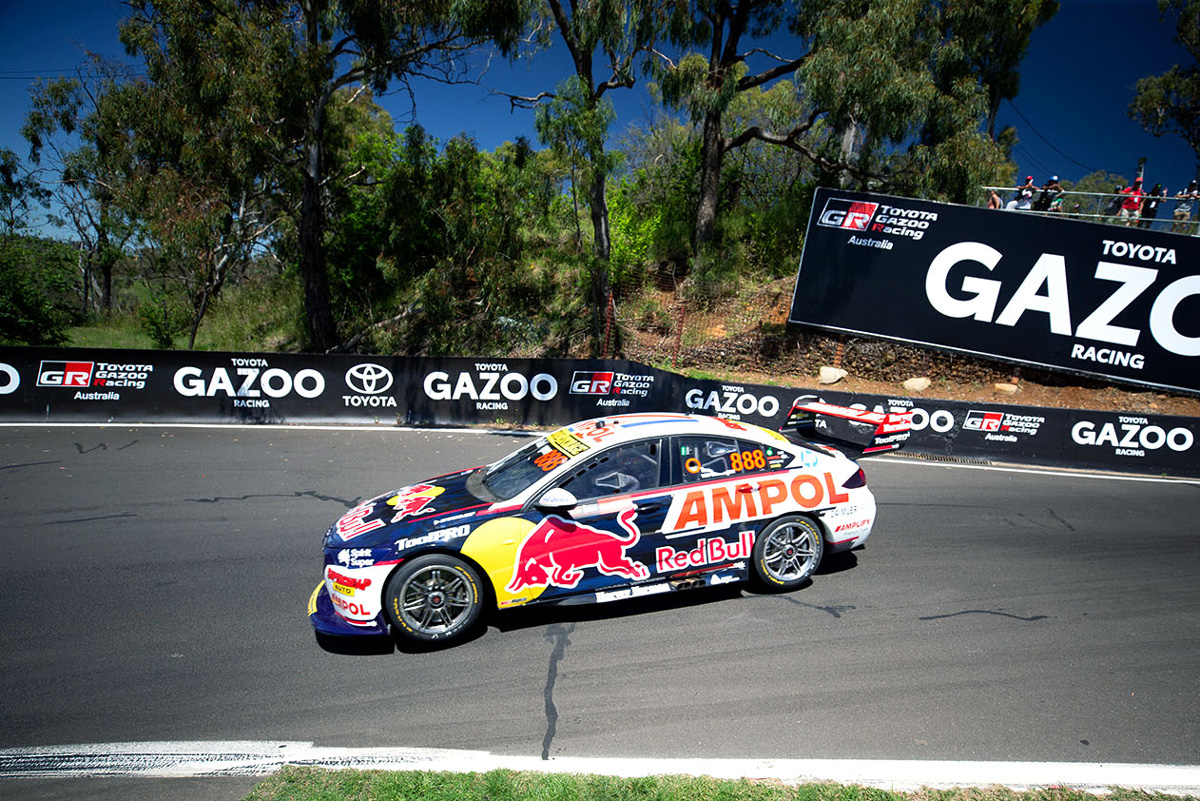 Red Bull Ampol Racing’s Shane van Gisbergen/Garth Tander lead at the halfway mark of the Repco Bathurst 1000, while Walkinshaw Andretti United is fighting back from a tyre failure.

In an order which is somewhat jumbled due to pit strategy and circumstances, it is Tander in first position in the #888 ZB Commodore with three of their seven compulsory pit stops done after 81 of a scheduled 161 laps.

Mostert and Holdsworth have dominated for pace so far, but a tyre failure across the top on Lap 49, while the former led by more than 12 seconds on merit, dumped them to as far back as 12th.

Now, however, they are seemingly back in a good position, although their true position is clouded by discrepancies in pit stops.

All but one primary driver sat in the cars which filled out the first four rows of the grid for the start of the race at a cool, cloudy Mount Panorama.

D’Alberto led the field to Hell Corner, but he held top spot only until they arrived at The Chase, when Holdsworth went down the inside in the pole-sitting #25 ZB Commodore.

D’Alberto dropped another spot in the next braking zone when Tander, who had made a good getaway from fifth on the grid, also made the pass at Murray’s Corner.

Alex Davison (#17 Shell V-Power Mustang) was fourth and Tim Slade (#3 CoolDrive Mustang) fifth at the end of the standing lap, at which time Moffat held ninth after a tardy start from third on the grid.

Slade passed Alex Davison on Lap 6 at Hell Corner, while Holdsworth had disappeared to a 5.6s margin over Tander and a 13.2s gap to D’Alberto at the end of Lap 10.

As they were taking the control line, Moffat locked up and ran off at The Chase and was followed into the weeds by Bryce Fullwood (#2 Mobil 1 Middy’s ZB Commodore) at one car back, those two resuming in 12th and 14th, respectively.

A Safety Car was called on Lap 17 due to Thomas Randle running off and nosing into the tyre barrier at Hell Corner in James Courtney’s #44 Boost Mobile Mustang, wiping out Holdsworth’s 7.2s lead over Tander and 17.2s over D’Alberto.

A handful had already made their first pit stops by then, with the yellow flags prompting the rest to do so.

Holdsworth, Tander, D’Alberto, and Car #3 with Tim Blanchard behind the wheel remained first through fourth, ahead of Brodie Kostecki in an earlier stopping #99 Boost Mobile ZB Commodore and his Erebus Motorsport team-mate Jack Perkins (#9 Shaw And Partners ZB Commodore).

Waters was ninth and Whincup 11th, with Alex Davison 18th after a double-stack.

The restart came on Lap 19 and Holdsworth immediately drove away from the field again.

Brodie Kostecki wasted little time passing Blanchard, then slipped down the inside of D’Alberto for third position on Lap 20 at Forrest’s Elbow.

Waters had risen to the top five when he went under Blanchard at The Chase on Lap 22, then passed D’Alberto for fourth on Lap 24 with a dive at Forrest’s Elbow.

Whincup was on a climb when he bumped the wall at Forrest’s Elbow on Lap 28 in pursuit of Blanchard, who he overtook for sixth at Hell Corner on Lap 33.

In the meantime, Perkins had to pit with a power steering failure in Will Brown’s car and Brodie Kostecki was back into the pits earlier than expected for a rotor change on Lap 33, in a bid to address a braking problem.

Holdsworth lost two seconds of his lead on Lap 30, possibly due to negotiating the power steering fluid dropped by Car #9, but was 6.5s ahead of Tander when he handed over to Chaz Mostert on Lap 37.

Whincup pitted on Lap 38 and the rest, including Tander, took service for a second time on Lap 40.

At the completion of that cycle, Mostert had a 10-second lead over Waters, from Brodie Kostecki, van Gisbergen, De Pasquale, Whincup, Blanchard, David Reynolds (#26 Penrite Mustang), Percat, and Warren Luff (#2 Mobil 1 Middy’s ZB Commodore), with Will Davison 14th in the #17 Mustang.

Mostert continued to put space between himself and Waters, albeit at a slower rate than Holdsworth had been gapping the field.

He was more than 12 seconds up when the left-rear tyre failed on Car #25, which Mostert returned to the pits at slow speed for another set of rubber and resumed in 12th position.

That put Waters into a lead of more than four seconds over Brodie Kostecki, who was slightly further in arrears again when he handed the #99 ZB Commodore back to David Russell on Lap 54.

De Pasquale followed him into the lane but stayed in the #11 Mustang, while Waters handed over the lead to van Gisbergen when he stopped on Lap 56, with Moffat getting back into the #6 Mustang.

Van Gisbergen pressed on until Lap 63, when he finished off a 23-lap stint by handing Car #888 back to Tander as Triple Eight changed rotors.

That put an off-sequence Mostert back in the official race lead by 24 seconds over Moffat, and about eight seconds more over Tander.

Mostert had recovered a chunk of time since the tyre failure and was over 28 seconds in front of Moffat when he pitted again on Lap 69, with Holdsworth resuming in sixth.

Moffat led by more than six seconds at that point, but had seen that whittled down to under four seconds when he stopped on Lap 77 and rejoined in fifth spot.

At the end of Lap 81, Tander led from Holdsworth, Moffat, Wood, D’Alberto, and Russell (four stops).