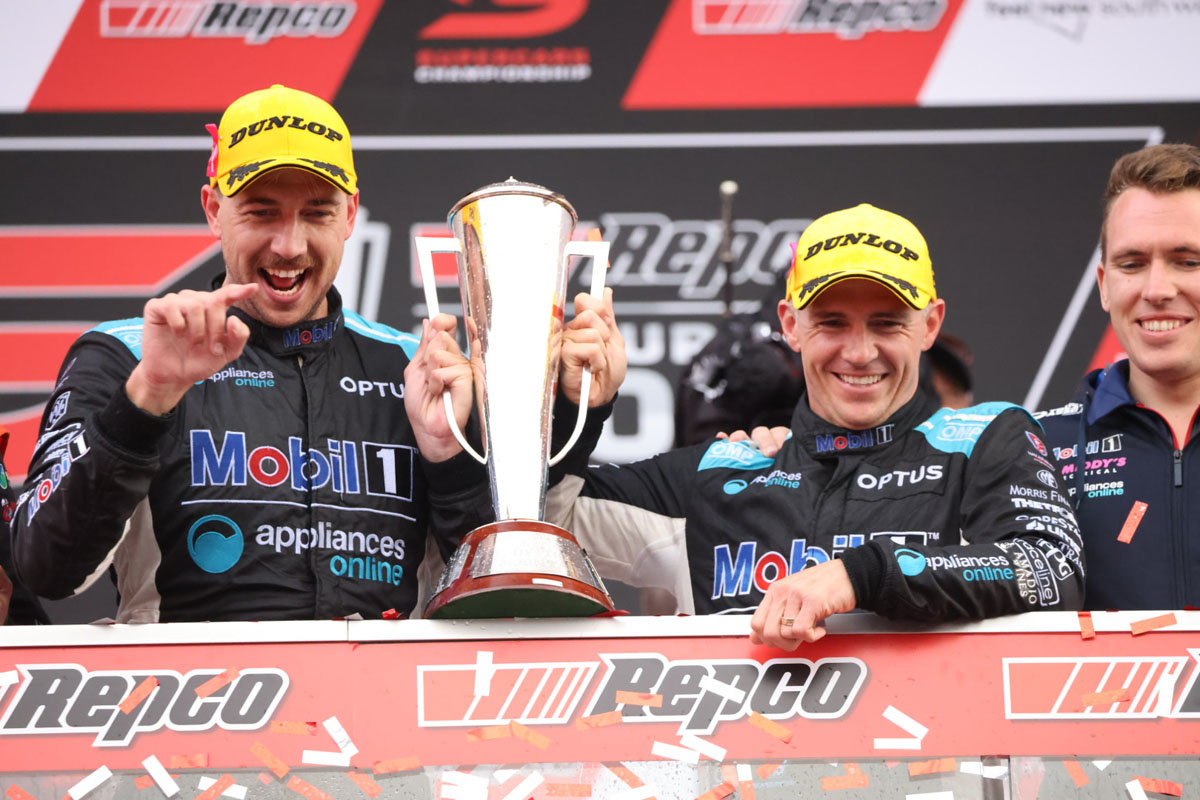 Walkinshaw Andretti United’s Chaz Mostert and Lee Holdsworth fought back from a tyre failure to win the 2021 Repco Bathurst 1000.

Their #25 Mobil 1 Appliances Online ZB Commodore had been fastest for much of the weekend, and so it was that they had pace to burn come race day at Mount Panorama.

Red Bull Ampol Racing’s Shane van Gisbergen put up a big fight in the last 20 laps but he had not the speed to go with Mostert, and then suffered a delaminated tyre anyway.

He ultimately got home 18th in the #888 ZB Commodore which he shared again with fellow 2020 race winner Garth Tander, while Tickford Racing’s Cameron Waters was second for a second year in a row, this time with James Moffat in the #6 Monster Energy Mustang.

Erebus Motorsport got onto the podium courtesy of Brodie Kostecki and David Russell, who also had to make up ground to do so after early brake problems in the #99 Boost Mobile ZB Commodore.

It was Mostert, however, who achieved ultimate glory after a left-rear tyre failure had dumped him from a 12-second lead to outside the top 10 on Lap 49.

The win is his second, Holdsworth’s first, and comes 10 years after WAU’s most recent, when it was the factory Holden Racing Team.

Red Bull Ampol Racing’s Jamie Whincup finished fourth in his last race as a full-time Supercars driver, a result shared with Craig Lowndes, while Bryce Fullwood and Warren Luff (#2 Mobil 1 Middy’s ZB Commodore) made it both WAU cars in the top five.

A drive failure for the sister #11 Mustang of Anton De Pasquale and Tony D’Alberto had triggered a Safety Car with just under 21 laps to go, setting up a straight run home without the need for anyone to fuel-save.

Mostert held the lead on tyres which were slightly used at his recent stop, with van Gisbergen second on what was brand-new rubber.

Slade was 11th and Will Davison 12th, the latter’s #17 Mustang having had to double-stack twice and serve a hold penalty for an unsafe release into Whincup’s path at the latter of those stops.

No sooner had the race restarted with 19 laps to go, Feeney hit the wall across the top and beached the #39 Supercheap Auto ZB Commodore at McPhillamy Park.

That erased a lead already up to a full second for Mostert, who then had to negotiate Restart 6 with 16 laps to go.

The Walkinshaw Andretti United driver once again pulled a second clear of van Gisbergen by the time they tripped Sector 2, at the exit of Forrest’s Elbow.

Both Mostert and van Gisbergen continued to rag their cars as hard as they could, but the leader continued to make margin.

Van Gisbergen’s chances of victory were therefore already slipped away when the right-front tyre started to delaminate and he could only step aside as Waters drove on past on Lap 155.

Brodie Kostecki did as well, although he had to make the pass at Sulman Park, and hung the back of the #99 ZB Commodore out so far that it scraped the wall.

Van Gisbergen resumed in 18th after pitting, and that was where he would remain.

Mostert had been more than four seconds up on #888 when its drama became apparent, and even though he apparently started to back off, he was 4.4s clear of second place with a lap to go.

Back at the completion of Lap 81 of 161, Tander was leading in van Gisbergen’s ZB Commodore, until he took their fourth pit stop on Lap 83 and rejoined just behind second-placed Moffat in Waters’ #6 Mustang.

Holdsworth thus led again in Car #25, albeit having made its fourth stop eight laps earlier than Car #6 due to the tyre drama which had put Mostert out of sequence.

Holdsworth did, however, have half a minute on Moffat, while Tander was third having pitted six laps more recently again.

Tander harassed Moffat for a period of time before settling in at just under a second back from Car #6, and they would be the top two when Holdsworth pitted for #25’s fifth stop on Lap 92.

That marked the end of a 23-lap stint, presenting the possibility of just two more pit stops to reach the chequered flag,

Moffat was into the pits on Lap 99 with Waters installed in Car #6 and when Tander pitted a lap later, van Gisbergen was able to jump the Tickford car thanks to a shorter fill.

The complexion of the race changed when a Safety Car was called to ensure an echidna which had strayed onto the race track at The Cutting could be safely cleared.

Holdsworth had just started Lap 106 with a lead of 39 seconds and Walkinshaw Andretti United would take the opportunity to call him in to make way for Mostert, while Waters also stopped in the #6 Mustang.

It meant van Gisbergen led, but Mostert was second with a six-lap fuel advantage, followed by Whincup.

The latter had jumped De Pasquale in the last cycle and managed to just keep him at bay, meaning the #11 Mustang held fourth, from Waters, Fullwood, Percat, and Brodie Kostecki in eighth.

The restart came on Lap 110, at which time Brodie Kostecki rounded up Percat at The Cutting then elbowed his way past Fullwood at Murray’s.

There was an explosion of action on Lap 111 when Mostert went outside of van Gisbergen at Griffins, but was held wide such that Whincup drove around the outside of Car #25 at The Cutting.

Not only that, De Pasquale passed Mostert on the run to Reid Park and when Waters apparently got baulked by #25 as he tried to follow, Brodie Kostecki hip-and-shoulder past him as they exited Metal Grate, of all places.

Mostert regained one spot when he went down the inside of De Pasquale at Murray’s on Lap 112, before a third Safety Car came next time around due to Ojeda crunching the wall at The Dipper while 11th.

Kelly Grove Racing’s David Reynolds (#26 Penrite Mustang) stayed out but the rest pitted, with Mostert able to short-fill but #88 and #17 having to stack.

As such, Reynolds was into the lead, from Mostert, with Brodie Kostecki, jumping van Gisbergen into third.

Fifth onwards was Percat, Waters, Slade, and De Pasquale, with Will Davison in 11th, and Whincup in 12th.

The race restarted on Lap 117, before Van Gisbergen passed Brodie Kostecki at The Chase on Lap 119, and De Pasquale was shuffled back after an unsuccessful attempt to pass Slade just behind.

Mostert was back into the lead when he went under Reynolds at The Chase on Lap 120, and van Gisbergen also got by the #26 Mustang a lap later.

In the meantime, Jake Kostecki had nosed into the barriers at Forrest’s Elbow, which prompted DJR to call De Pasquale into the lane.

The Safety Car was subsequently called on Lap 122, drawing Reynolds into the lane, while Jake Kostecki eventually drove away under his own power.

The net result of all of that was Mostert leading van Gisbergen, Brodie Kostecki, Percat, Waters, Fullwood, Slade, Will Davison, Whincup, and Hazelwood, with De Pasquale in 16th.

He was able to pit from a five-second lead on Lap 138, followed into the lane by Brodie Kostecki from third, and took four good but not quite new tyres.

Van Gisbergen, among others, came in a lap later, but the 2020 race winner was already five seconds behind again when he re-emerged on Mountain Straight.

Moments later, however, a Safety Car was called on Lap 140 when De Pasquale stopped at The Cutting, setting up an intense dash to the finish.

The 2022 Repco Supercars Championship starts at Newcastle on March 4-6.