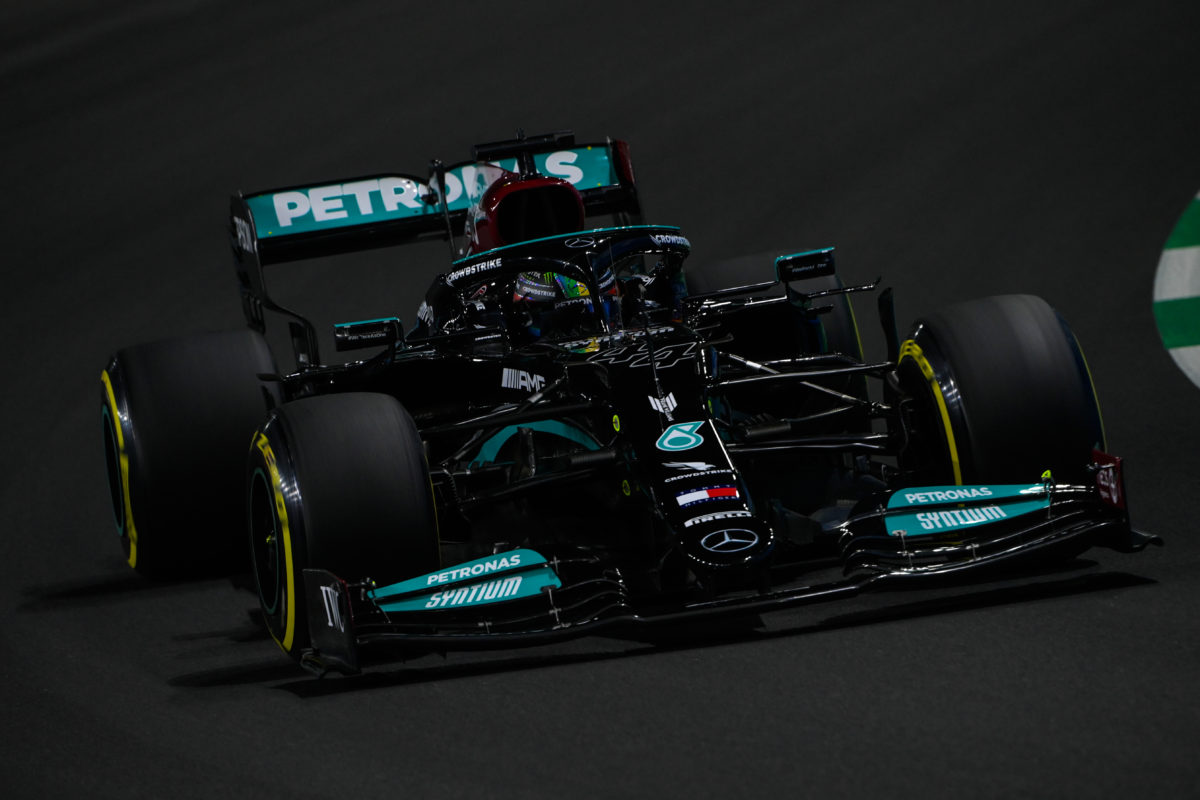 The Englishman threw down the gauntlet in the final moments of the session, the Dutchman making a mistake in his quest to overcome his championship rival.

Contact with the barrier at the final corner as the chequered flag fell left Verstappen to climb from his car, raising questions over the health of his gearbox ahead of Sunday’s race.

A queue formed at pit exit as the qualifying hour commenced, all bar the two Mercedes immediately taking to the track.

Valtteri Bottas and Lewis Hamilton were both soon on circuit, the former with a new power unit since Free Practice 3.

Predictably, with so many cars on track, queuing was a factor in approach to the final corner.

George Russell got proceedings underway, logging a 1:30.964s only for his Williams team-mate to go half a second faster.

The first of the serious runners to record a time was Verstappen, who set three purple sectors en route to a 1:28.659s.

Sergio Perez logged a 1:29.039s to move into second, while Hamilton ran off the road early on his first flying lap.

The Mercedes driver carried on with the lap regardless, pushing next time round to set a 1:28.466s.

The hectic session continued with Carlos Sainz going fastest with a 1:28.330s with eight minutes to run.

On his second run, Verstappen improved to 1:28.285s to top proceedings.

It didn’t stand for long, with Bottas going 0.2s better as the order continued to change rapidly.

Verstappen was forced to abandon a late lap when he was caught in traffic approaching the final corner.

As the chequered flag fell on the segment, Bottas reported misfiring in his car before the engine switched off and left him stranded in the pit lane.

Bottas was among those to head out immediately as Qualifying 2 commenced.

Having exceeded track limits at Turn 4, Sainz had a spin at Turn 11, launching the Ferrari over the kerb and pitching it sideways.

He brushed the rear wing end fence on the Tecpro barrier, the car otherwise unscathed as he recovered to the pits.

Earlier in the session, he’d found himself baulked by Pierre Gasly, an incident which officials confirmed they would investigate post-session.

Having struggled on his first run in Qualifying 2, Hamilton logged a 1:28.068s on the second time of asking.

That was good enough for second at the time, which became third when Perez went fastest on a 1:27.946s.

Having headed back out on track, another moment for Sainz scuppered any hope he had of improving his time, leaving him languishing in 15th and out of the running for Qualifying 3.

Bottas logged a 1:28.143s to open the running, Yuki Tsunoda and Charles Leclerc slotting in second and third respectively.

The two Red Bulls and Lando Norris waited a few minutes before heading out, running slightly out of sequence presumably in their quest for a traffic-free run.

Hamilton’s next lap logged a 1:28.035s to top proceedings, though it was still a scrappy with the Mercedes looking far from settled.

Gasly set a 1:28.125s to move into fourth, pushing Perez to fifth just as the Mexican began another lap.

Hamilton’s next run was more settled, the Brit duly delivering a 1:27.511s to claim provisional pole over Verstappen by little more than 0.1s.

It was an aggressive lap, wide at Turn 2 and perilously close to the barrier on exit as he went purple through the first sector.

He looked on course for pole position until a locked brake entering the final corner resulted in him tagging the wall on the exit.

The Dutchman was forced to stop the car and climb out, ending the session and leaving him third on the grid behind Hamilton and Bottas.