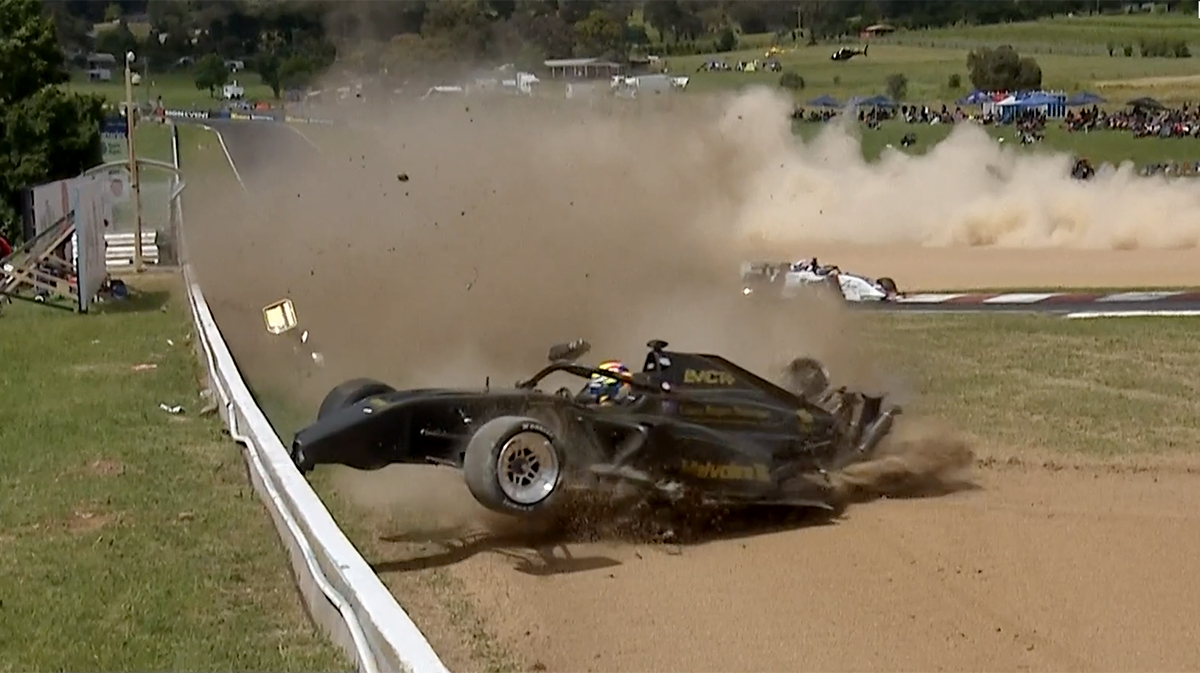 The fourth and final race of the weekend at Mount Panorama was red flagged after Cameron and Luis Leeds collided at high speed at The Chase.

James Golding had led at that point, but the result was reverted to the end of Lap 3 and declared a non-race.

A 60-point prize had been on the line for victory in the series finale, but with no points awarded, Cameron retains the pre-race lead he’d held.

S5000 communications though have noted: “Results remain provisional pending the outcomes of Motorsport Australia investigations into the final race incident”.

Golding had got the jump from pole position to lead the field into Hell Corner. Behind him, Cameron stalled from third on the grid, falling to the back of the field.

Fifth place starter Joey Mawson was quick away, avoiding the idle Cameron and surging to second.

As Mawson got to the inside of second place starter Nathan Herne, the pair made light wheel-to-wheel contact on the corner exit, which forced the Garry Rogers Motorsport driver onto the grass.

As the chaos unfolded behind him, Golding eased away from Roberto Merhi who had made his way to second place.

Having been bundled out at the first turn, Herne went around the outside of Leeds on the exit of The Chase. Cameron was a benefactor too, scooching through too.

The drama continued on the start of Lap 2 as Cameron locked his rear wheels on approach to Hell Corner, nosing into the back of his team-mate Herne.

That sent them both into a spin, beaching themselves in the gravel trap.

Cameron and Herne would return to the race, the latter a lap down on the field.

A hard-charging Cameron, who pitted for a new front nose cone, managed to catch the tail of the field in time for the restart.

On the restart, Merhi made a mistake at Hell Corner and lost out to Mawson.

Similarly, Macrow locked up into the first turn and came under pressure from Boys, although he would hold onto fifth.

The race would reach its climax near the end of Lap 6 when Leeds and Cameron collided in spectacular fashion at The Chase.

A strong run down Conrod Straight allowed Cameron to the inside of Leeds, but wheel-to-wheel contact would bring an untimely end to proceedings.

Leeds was launched into the gravel trap while the left rear tyre of Cameron’s car was stripped off the rim, seeing him spin wildly out of control.

Cameron nosed into the outside wall and rode up into the air, fortunate not to flip. Similarly, Leeds was lucky not to roll as his car dug into the gravel.

Both drivers would walk away from their cars as the Safety Car was drawn and then the red flag, bringing everyone back to pit lane.

The race would be declared at that point and no points awarded.