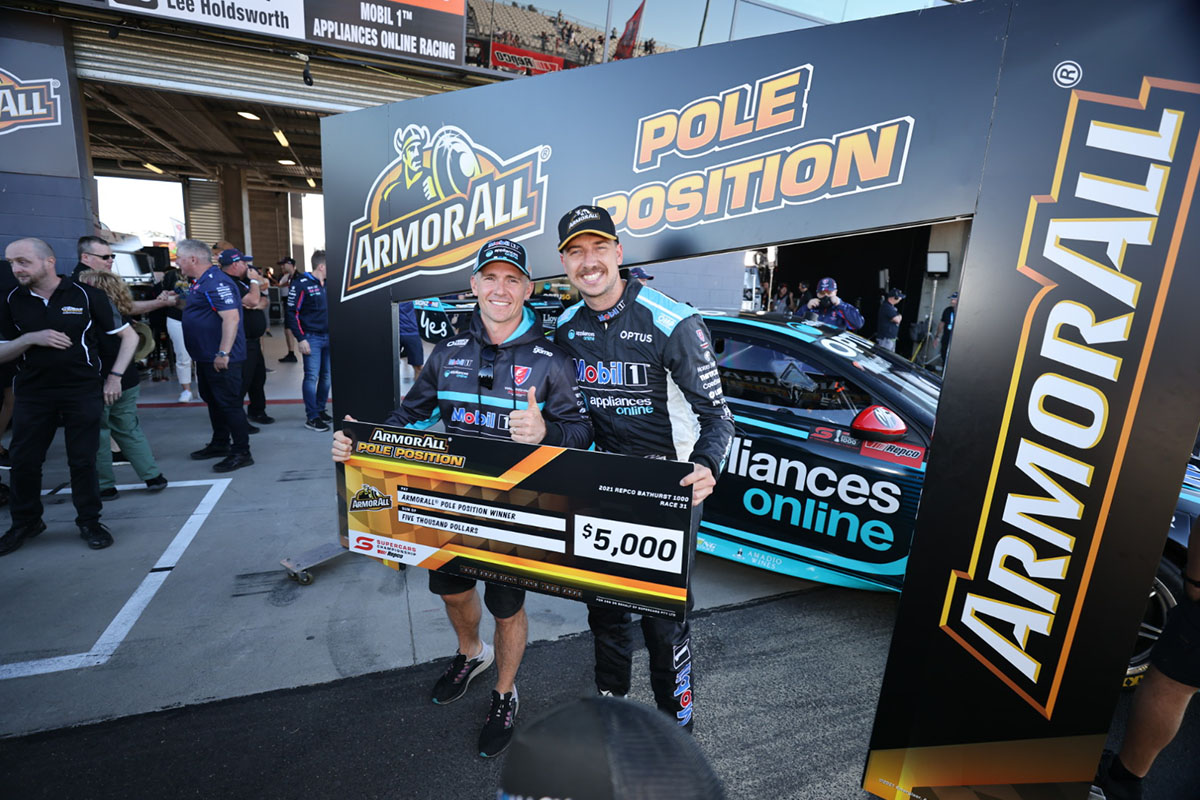 Chaz Mostert has broken the practice/qualifying lap record to claim pole position for the 2021 Repco Bathurst 1000.

The Walkinshaw Andretti United was third-last onto the Mount Panorama Motor Racing Circuit for the Top 10 Shootout and nailed a 2:03.3736s in the #25 Mobil 1 Appliances Online ZB Commodore, touching the wall exiting Forrest’s Elbow along the way.

Either of he or Lee Holdsworth will share the front row with the #11 Shell V-Power Racing Team entry thanks to the exploits of Anton De Pasquale, while Tickford Racing’s Cameron Waters took third in the #6 Monster Energy Mustang.

“I don’t even know what words…” said Mostert.

“The car was just so enjoyable to drive; it’s been awesome all weekend.

“It’s just good to have some clean track for the race.

“But, I just want to thank our whole team at Walkinshaw Andretti United, the guys doing at SMP for four rounds, we did it really tough there, but all that hard work in those weeks there gave us obviously the qualifying result here.

“And also, all our members and fans, it’s so good to have you back at the track, it just hasn’t been the same the last 18 months.

“I feel like that egged us on a lot, so yeah, really buzzed.”

Waters had been the fastest driver before Mostert blew that away by more than three tenths of a second, with just Anton De Pasquale and then Will Brown to come.

De Pasquale gave up almost three tenths in Sector 1, but was fastest across the top and ultimately took up second on a 2:03.6634s in the #11 Mustang he is sharing with Tony D’Alberto.

Brown lost even more time relative to Mostert to the first sector, then another couple of tenths in the second, and eventually earned fifth on the grid for the #9 Shaw And Partners ZB Commodore.

Even so, the provisional pole-sitter was the fifth of five drivers in the ‘threes’, specifically a 2:03.9921s.

Erebus Motorsport team-mate Brodie Kostecki was fifth onto the race track and laid down a highly impressive marker for the rest when he clocked a 2:03.7733s in the #99 Boost Mobile ZB Commodore, despite a puff of dirt exiting The Chase.

Waters was next, using up all the road he could and then twitching on the descent to Forrest’s Elbow on his way to a 2:03.6864s.

With Mostert and De Pasquale going quicker than the 2020 pole-sitter, Waters or James Moffat will thus start third, and Kostecki or David Russell in fourth.

Tim Slade went from a provisional fourth to sixth all-told on a 2:04.0508s in the #3 CoolDrive Mustang.

Shane van Gisbergen remained seventh after setting a 2:04.3648s in the #888 Red Bull Ampol ZB Commodore, admitting to wrist soreness on his cool down lap after glancing the inside wall at Forrest’s Elbow.

The Shell V-Power Racing Team’s Will Davison (#17 Mustang) dropped the right-rear off exiting Hell Corner and also glanced the wall coming out of Forrest’s Elbow on his way to a 2:04.7787s which was eighth-fastest.