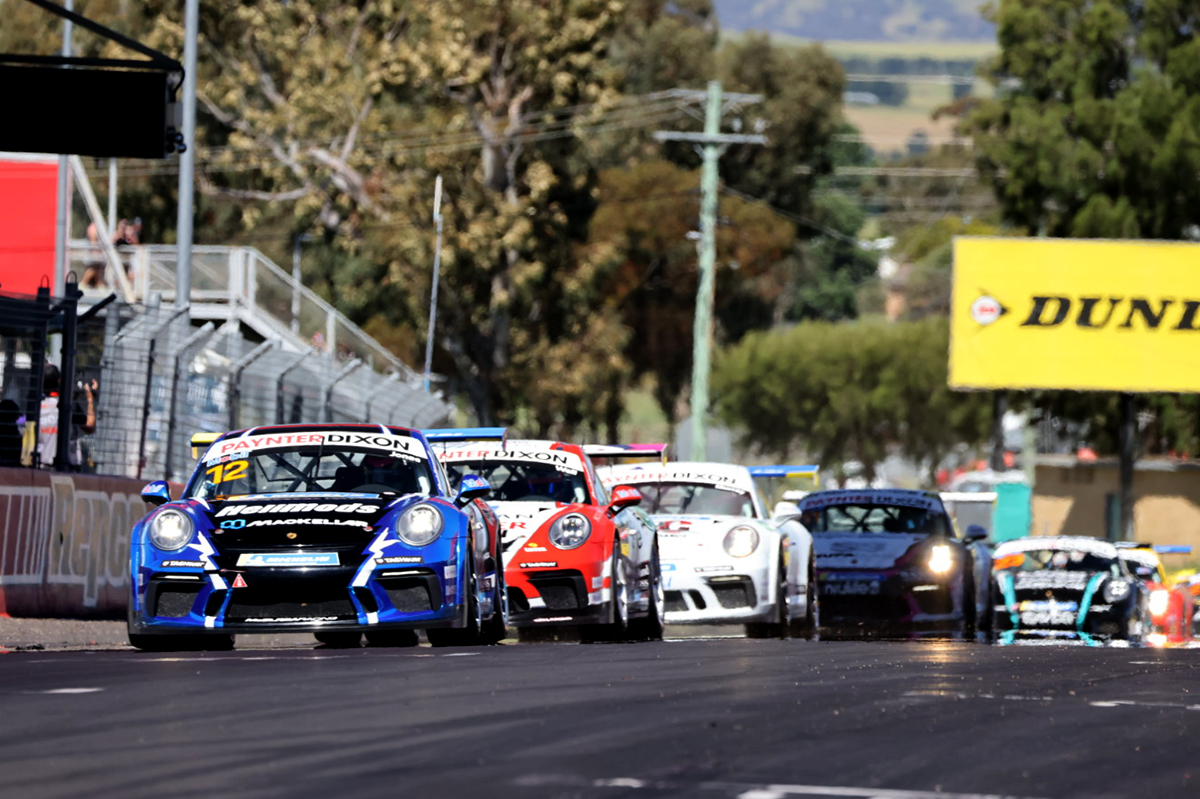 Jones led from lights to flag, sustaining intense pressure throughout the 15-lap affair from David Wall, before the 2017 title winner dropped out of contention on the penultimate lap.

Cooper Murray claimed second to make it a McElrea Racing one-two while third place went to CHE Racing driver Cameron Hill, taking him another step closer to the title.

Initially, it was Jones who led Wall into Hell Corner, ahead of Hill and Murray in a side-by-side battle on the run-up to Griffins Bend.

After a clean start to the race, chaos unfolded at The Chase on Lap 1.

A strong run down Conrod Straight allowed seventh placed Aaron Love to get to the inside of Max Vidau.

The pair would duly make wheel-to-wheel contact, resulting in Vidau losing control of his car as he was cast wide onto the grass.

Vidau would skate across the grass and backwards across the track, narrowly avoiding David Russell and Love.

Dean Cook, Tim Miles, and Dale Wood, the latter who had gained seven places prior to the incident, were blinded by the dust and took to the grass in avoidance.

Wood seemingly suffered an issue in the melee, pulling over on the exit of The Chase.

With the Safety Car controlling proceedings, it was Jones from Wall, Murray, Hill, Russell, Love, Matthew Payne, Callum Hedge, Jackson Walls, and Sam Shahin who rounded out the top 10.

Racing resumed on Lap 5, Jones coming under pressure from Wall, which he would sustain for the duration of the race.

By Lap 7, Craig Lowndes had cracked the top 10, up 12 places on his starting position.

Drama struck on Lap 8 when Marc Cini spun at The Chase having locked up under brakes. Yet again, Miles took to the grass in avoidance as did Drew Hall.

Lap after lap, Wall put pressure on Jones for the lead, though that attack would come to an end on the penultimate lap when he suddenly pitted.

The team changed the left rear tyre and sent him on his way, ultimately ending the race in 14th.

In the end, Jones would come across the line two-and-a-half seconds clear of team-mate Murray.

“I’m speechless right now, that was one of the best races of my life, the team gave me an awesome car,” Jones said.

“We started from pole, the best place to start from, but Dave had a fast car the whole race, and Cooper, my McElrea team-mate was also on it. So every lap it was reset, do it again and just go through the process.

“Car felt awesome, my fitness, mental condition was all on point, so it was so much fun, I can’t wait for tomorrow.”

Hill completed the podium while Love and Payne were fourth and fifth respectively.

Porsche Carrera Cup Australia continues on Sunday with its fourth and final race of the week at 10:50 local time/AEDT.