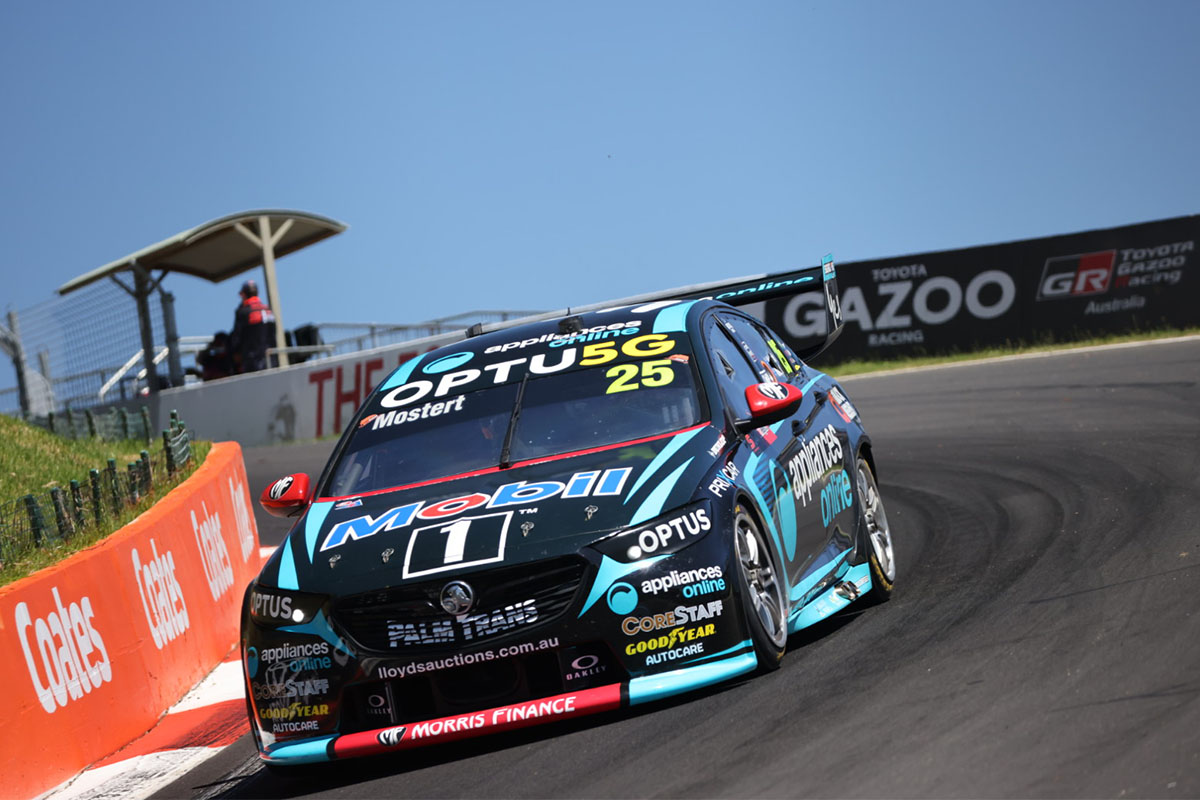 Holdsworth drove Chaz Mostert’s #25 Mobil 1 Appliances Online ZB Commodore as fast as a 2:05.6421s in the second and final co-driver session at Mount Panorama, two days after topping the first of those on a 2:05.2258s.

The WAU cars ended Practice 5 first and third, with Warren Luff improving five spots by clocking a 2:06.0959s in Bryce Fullwood’s #2 Mobil 1 Middy’s ZB Commodore with the chequered flag out.

They were split by Team 18’s James Golding (#20 DeWalt ZB Commodore) on a 2:06.0384s in Scott Pye’s car, while the best Red Bull Ampol Racing entry was the #88 ZB Commodore of Craig Lowndes in ninth, and Shell V-Power Racing Team’s quickest was Tony D’Alberto in 10th in the #11 Mustang.

Lowndes was 0.7043s slower than Holdsworth’s best, albeit in a session more focused on race pace, while Triple Eight Race Engineering continues to chase a vibration Car #88 which seems to be aerodynamic in nature.

The session was then interrupted in the 11th minute when Matt Campbell hit the wall on Conrod Straight in Andre Heimgartner’s #7 Ned Mustang.

Campbell had slapped the wall on drivers’ left under ‘The Tree’ earlier on that lap, with the left-front wheel eventually letting go and sending him across the track as he approached The Chase.

Holdsworth was on the pace again when red flag period ended, improving to a 2:05.7077s on his second flyer back out of the pits, while Lowndes had a subsequent spell in second spot despite complaining of that vibration in #88.

Lowndes was quickly usurped by Zak Best (#5 Truck Assist Mustang) and then Golding, the latter of whom was still second-quickest at 0.3307s off the pace at the half-hour mark.

After almost 40 minutes, Thomas Randle moved to third with a 2:06.1832s in James Courtney’s #44 Boost Mobile Mustang, before Holdsworth went even faster in clocking a 2:05.6421s on his third run.

That was the last change at the very top of the timing screen, although Holdsworth also consistently quick in rolling out a number of other laps in the 2:05s during the hour-long hit-out.

“Yeah look, the Mobil 1 Appliances Online car has been great since we rolled out of the truck and we have just continued to improve,” said Holdsworth.

“We worked on a race car then – you need scope for the race; balance changes throughout the race – so we’re just trying to find some tools for that and then Chaz will jump in for the next session and start tuning it up for the shootout.

“It’s always nice to be fast but we have got to be there tomorrow,” he added.

“We’ll keep our heads down and keep punching away.”

Tander was one position outside the top 10 after a session during which he had an off at The Chase when he pinched the right-front on Shane van Gisbergen’s #888 ZB Commodore.

David Russell was 12th-quickest in Brodie Kostecki’s Boost Mobile ZB Commodore, albeit ending the session parked in the run-off area at The Chase.

Russell went virtually straight-on at the left-hander, with radio transmission suggesting he felt that something may have broken in the front of the #99 Erebus Motorsport entry.

In the #9 Shaw And Partners ZB Commodore which Erebus’s Will Brown put on provisional pole, Jack Perkins was 21st on a 2:07.2423s, one position ahead of Russell Ingall in Triple Eight’s #39 Supercheap Auto ZB Commodore.

The sixth and final practice session, for all drivers, takes place at 12:15 local time/AEDT.