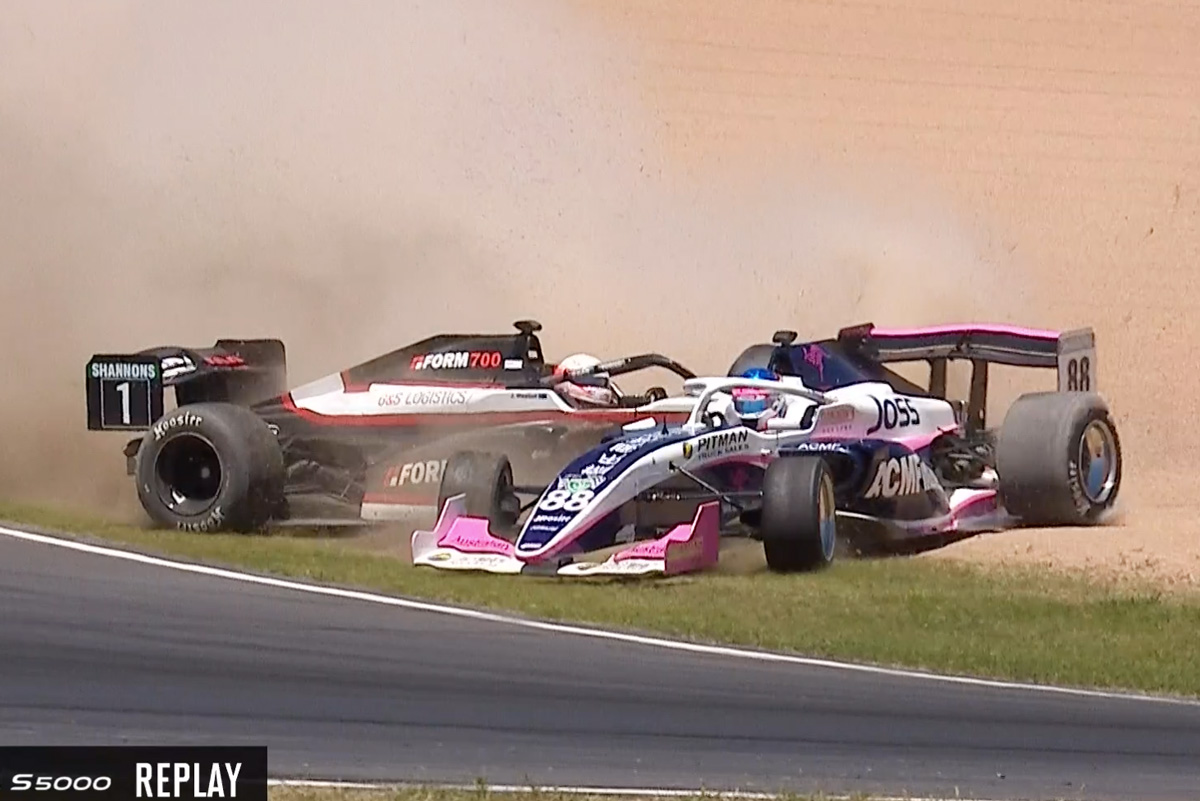 Joey Mawson (#1) and Jordan Boys (#88) after colliding at The Chase. Source: Fox Sports

Aaron Cameron has moved another step closer to taking home the coveted Tasman Cup after surviving a red flag-interrupted race.

The penultimate race of the Shannons S5000 Tasman Series was ultimately won by James Golding, who led another Garry Rogers Motorsport podium trifecta, ahead of Nathan Herne and Cameron.

But the biggest moment came on the opening lap at The Chase, as Joey Mawson poked his nose down the inside of Jordan Boys, sending both cars spinning.

Both drivers were lucky to skate across the road without collecting any of the oncoming traffic, although a dust-impaired Yoshiaki Katayama would then run off on his own and into Boys’ #88 which had come to rest in the gravel trap.

“It was no big impacts thankfully, it was all pretty glancing and these cars are pretty safe, so that part of it was all good but obviously really frustrated to give the team so much damage to try to repair,” said Boys.

“[Mawson] probably did get a good tow. It was pretty late, he sort of disappeared into a blind spot, but it’s pretty late and it’s a pretty fast corner so probably not clever but it is what it is.

“I understand it from his point of view, he’s sort of down the back and he should be up the front so he’s trying to charge through but pretty disappointed to, one, get turned around, and then, two, get cleaned up afterwards. It is pretty frustrating.”

As for Mawson’s perspective: “It obviously looks like he didn’t see me because I pulled out, I got a good run, got the slipstream and as soon as I turned in, he just closed the door. So I’m guessing he didn’t expect me to come up the inside so late into the straight. So it was a bit scary from my point of view, I’m just hoping he’s okay.”

The incident, which will be investigated post-race, triggered the red flag.

Action would eventually resume, with Golding trumping Herne by just 0.4096s after seven laps, the latter having critically got ahead of Cameron at Murray’s Corner moments before the early-race suspension.

That affair, on Sunday morning (10:15 local time/AEDT start), will come with an increased 60-point prize for victory.