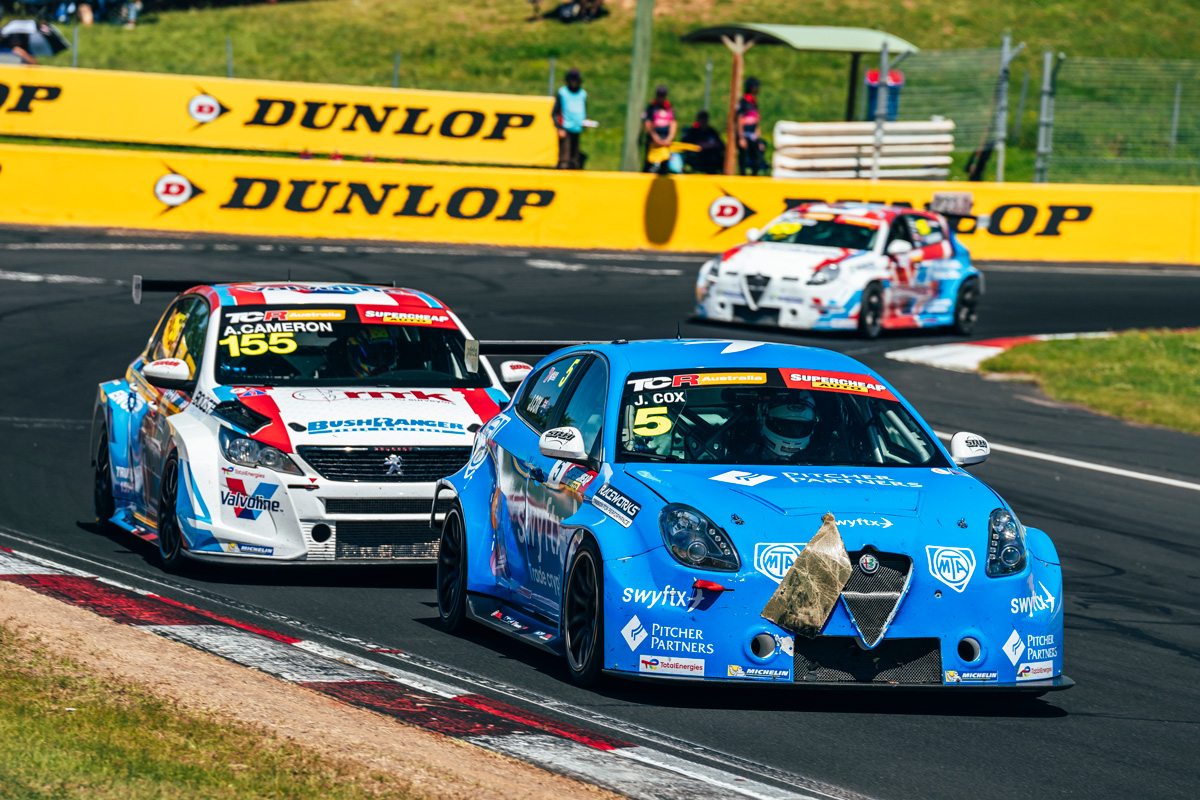 Jordan Cox held off Aaron Cameron in a thrilling final race of the 2021 Supercheap Auto TCR Australia Series at Mount Panorama. The pair of young guns not only ended up fighting for the Race 3 win, but also the round victory and the title of Bathurst 400 winner.

Ultimately it was Cox in his Alfa Romeo Giulietta and triumphed but with Cameron and his Peugeot 308 GTi right on his bumper. The pair ended up tied on points for the weekend, but Cox claimed the Bathurst 400 by virtue of winning two of the three races; while Cameron won the opening race.

The third and final race of the Bathurst 400 was cut from its originally scheduled 21 laps to 16 after seven drivers struck tyre trouble in the second race. The shorter distance didn’t mean less action though, with the front-wheel-drive tin-tops once again putting on an exciting show.

Pole-sitter Cameron claimed the ascendancy at the start but James Moffat soon hunted him down and took the lead in his Renault Megane.

The HMO Customer Racing team’s difficult weekend was capped with another disappointment, when Nathan Morcom hit the wall exiting The Dipper in his Hyundai i30 N. This brought out the Safety Car on Lap 4 which lasted two laps.

Moffat made a break when the race got going again, opening a small gap on Cox and Cameron. But as the laps wound down Cox’s Alfa Romeo came to life and he set the fastest lap of the race on Lap 10 to close in on the leader.

Cox was his typically wild self in his pursuit, putting two wheels on the dirt at Skyline and then locking a brake at The Chase in his desperate chase. Ultimately he didn’t need to push so hard because Moffat’s right front tyre delaminated on Conrod Straight and forced the Renault driver to slow and crawl back to the pits.

Cox, now with a piece of Moffat’s tyre stuck to the front of his Alfa Romeo, had to hold off a fast-finishing Cameron but he managed to hold his nerve.

Michael Caruso recovered from his high-speed off in Friday’s race to claim third place ahead of Jason Bargwanna and Luke King.

Zac Soutar finished in sixth place, with German ace Christopher Mies once again charging through the field from his last place starting spot to claim seventh.