Waters quickest in Practice 3 at Bathurst with a ‘four’

Waters quickest in Practice 3 at Bathurst with a ‘four’ 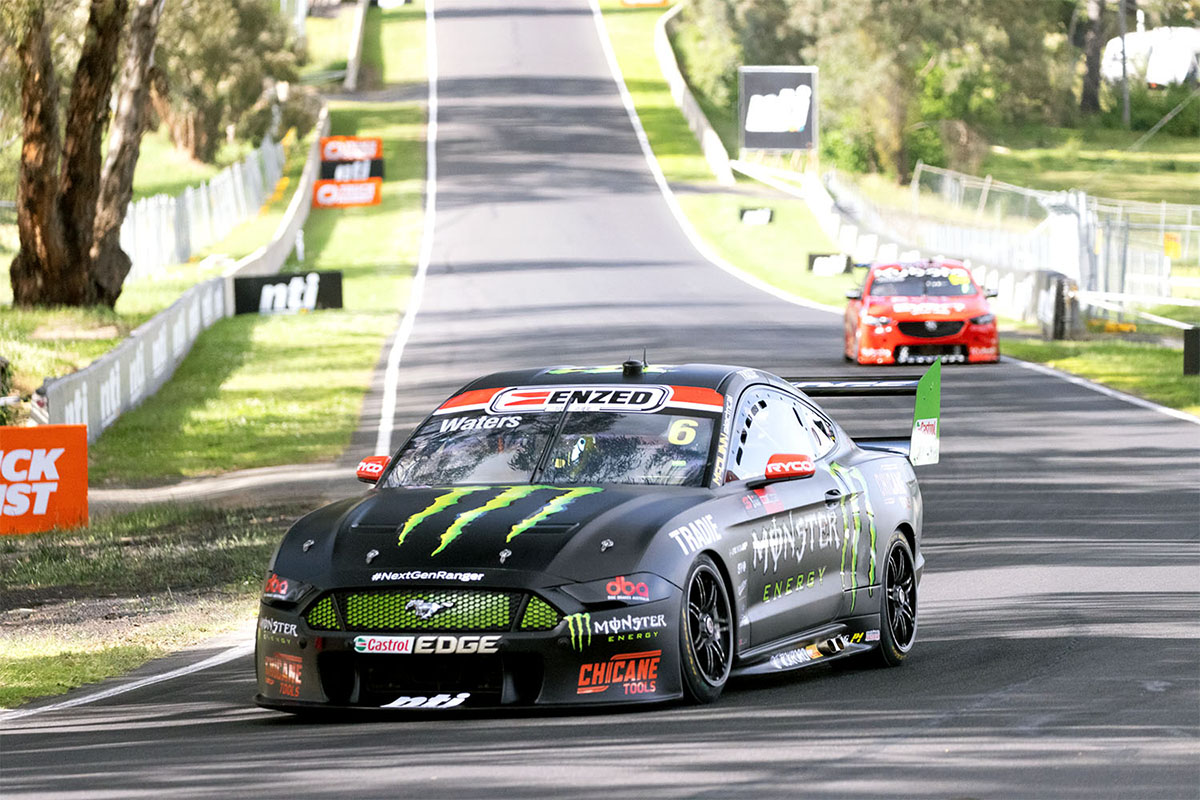 Tickford Racing’s Cameron Waters has gone fastest in Practice 3 for the Repco Bathurst 1000 as one of three drivers to get into the ‘fours’.

Waters, who was also quickest in Practice 1 with a 2:05.0233s on the morning prior, left it until after the chequered flag to make a mark on the session when he jumped up from 14th with a 2:04.7385s in the #6 Monster Energy Mustang.

That left the 2020 pole-sitter more than two tenths of a second clear of Triple Eight Race Engineering’s 2020 race winner, Shane van Gisbergen, with Walkinshaw Andretti United’s Chaz Mostert just a hundredth of a second further off the pace.

A regulatory change earlier in the week meant Practice 3 changed from a designated co-driver session to being open to all 50 steerers, although only a handful of cars rolled out with primary drivers onboard when pit lane opened.

Lee Holdsworth was second-quickest when he returned to the WAU pit bay having clocked a 2:06.0875s on his third flyer in Mostert’s #25 Mobil 1 Appliances Online ZB Commodore.

Brodie Kostecki, who had been among the fastest on his first run, then went to the top with a 2:05.1357s in the #99 Boost Mobile ZB Commodore on his second run, before handing over to co-driver David Russell.

Another primary driver in Garry Jacobson then jumped to second in Team Sydney’s #22 Muscle Car Warehouse ZB Commodore, albeit more than seven tenths off the pace on a 2:05.8584s.

Zak Best put Jack Le Brocq’s #5 Truck Assist Mustang into second spot on a 2:05.7242s on his second run, in the 22nd minute, and it was nearly another 20 minutes before Tickford Racing team-mate Thomas Randle bettered him with a 2:05.4253s in the #44 Boost Mobile Mustang.

By then, van Gisbergen had hopped into his #888 ZB Commodore and soon cracked the first ‘four’ of the weekend, a 2:04.9821s with just under 20 minutes of the session remaining.

New tyres reportedly started to appear for the final few minutes, as Tim Slade went third on a 2:05.3022s in the #3 CoolDrive Mustang, and was then edged back when Anton De Pasquale clocked a 2:05.0417s in the #11 Shell V-Power Mustang.

Despite the sunny conditions at Mount Panorama, there was more pace still to come, specifically from Waters when he set the fastest first sector and was personal best through the next two to put Car #6 back on top.

As such, the top five ended up being Waters, van Gisbergen, Mostert, Whincup, and De Pasquale, with James Courtney sixth on a late 2:05.0995s in the #44 Mustang.

Mostert said after the session, “We’re obviously still critiquing a little bit, there’s a couple of tenths there to the fastest car.

“We’re still chasing a little bit of qualifying balance; I think we’re probably more comfortable with the race car at the moment, but just trying to get the speed around here is pretty tricky.

“Overall, I think we’ve been in the top three every session so far so if we can keep that going along and get to the race with a straight car, we’ll be pretty happy.”

Car #99 finished seventh on the timesheet thanks to Brodie Kostecki’s earlier lap time, with the top 10 rounded out by Le Brocq, Will Davison (#17 Shell V-Power Mustang), and Slade.

Triple Eight’s Supercheap Auto wildcard entry ended up 11th, Broc Feeney taking the #39 ZB Commodore to a 2:05.3902s on his final lap after Russell Ingall had been as high as eighth when mostly co-drivers were circulating.

Brad Jones Racing’s #96 Coca-Cola ZB Commodore was back on-track after overnight repairs and ended up 25th-quickest on a 2:06.6982s thanks to the efforts of Macauley Jones and Chris Pither.