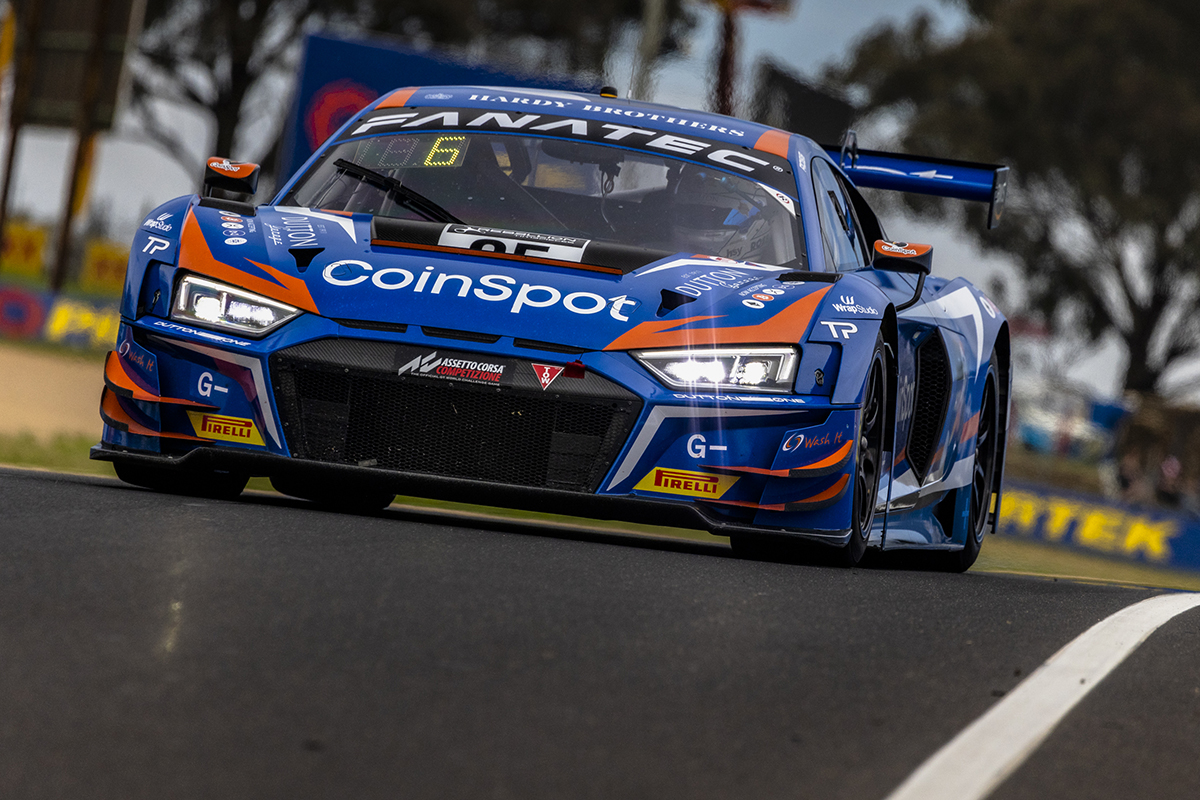 The experienced GT campaigner would hand the #65 Audi R8 LMS GT3 to Talbot for the second half of the race, passing Marc Cini in the #9 Audi for second and then the Brenton Grove/Stephen Grove #4 Porsche 911 GT3 R for the race lead shortly after the second Safety Car period.

Initially, it was Brenton Grove who led the field into Hell Corner from Peter Hackett (#888 Mercedes-AMG GT3) and Ross.

Christopher Mies (#777 Audi), who missed practice and qualifying due to being in quarantine, was quick to climb from 15th – and last – to ninth at the end of Lap 1.

Grove held a one-second advantage after one circuit of the scenic drive from Hackett. Ross was nearly another two seconds adrift in third, Paul Stokell (#124 Audi) fourth, and Garth Walden (#45 Mercedes-AMG) fifth.

Mies’ first real roadblock was Walden who put in a valiant effort to keep the factory Audi ace at bay for fifth.

Their battle was short-lived after Hackett crashed at McPhillamy Park just 10 minutes into the race.

A lengthy Safety Car intervention to retrieve the stricken Mercedes-AMG and clean the track brought the cars close to the pit window, which opened with 35 minutes to go.

Grove led the field back to the green flag with 38 minutes remaining.

It wasn’t long before the Safety Car was drawn again after Porter lost control of his car at Sulman Park, triggering a two-car crash.

Having lost the rear of the car, Porter in the #51 Porsche quickly came across the bow of the trailing Koundouris/Koundouris car, heavily damaging the right-front corner of the #69 Audi.

With the pit window open, the field came to the pit lane for driver changes.

Grove Jnr swapped seats with Grove Snr and the latter duly returned to the race in the lead.

With varying pit stop durations between classes, the field was shuffled.

Cini gained nine places on where he started to second in the #9 Audi while Ross fell to third when he handed the #65 Audi to Talbot.

Roberto Merhi was seventh at the time of the Safety Car but the #17 Audi with Mark Rosser at the wheel would move to fourth.

Scott Taylor was another benefactor, moving to fifth in the #222 Porsche.

Racing resumed with 25 minutes to go with Grove at the head of the field. Behind him, Talbot made quick work of Cini to move to second.

Grove and Talbot walked away from the rest of the field, leaving Cini to head a five-car battle for third.

Hobson cracked the podium with 22 minutes remaining, sweeping around the outside of Cini at The Grate.

Yasser Shahin, who had taken over from Mies, followed suit, making his way into fourth at Forrest’s Elbow.

At the 40-minute mark, Talbot took the lead away from Grove with a pass at The Chase.

Talbot skipped away from Grove, who was left to fight off Hobson, though the #96 Nissan would prevail.

Hobson began closing in on Talbot for the lead in the closing stages, although the Audi driver would respond and eventually stretch his legs out to a three-second advantage.

Overall and Pro/Am victory went the way of Ross/Talbot while Hobson was second and the Trophy class winner. Third was Shahin/Mies while Grove/Grove were fourth and Rosser/Merhi fifth. Cini, who finished eighth overall, was the top Am finisher.

Shahin clinched the Pro-Am title with victory in Race 1 yesterday.