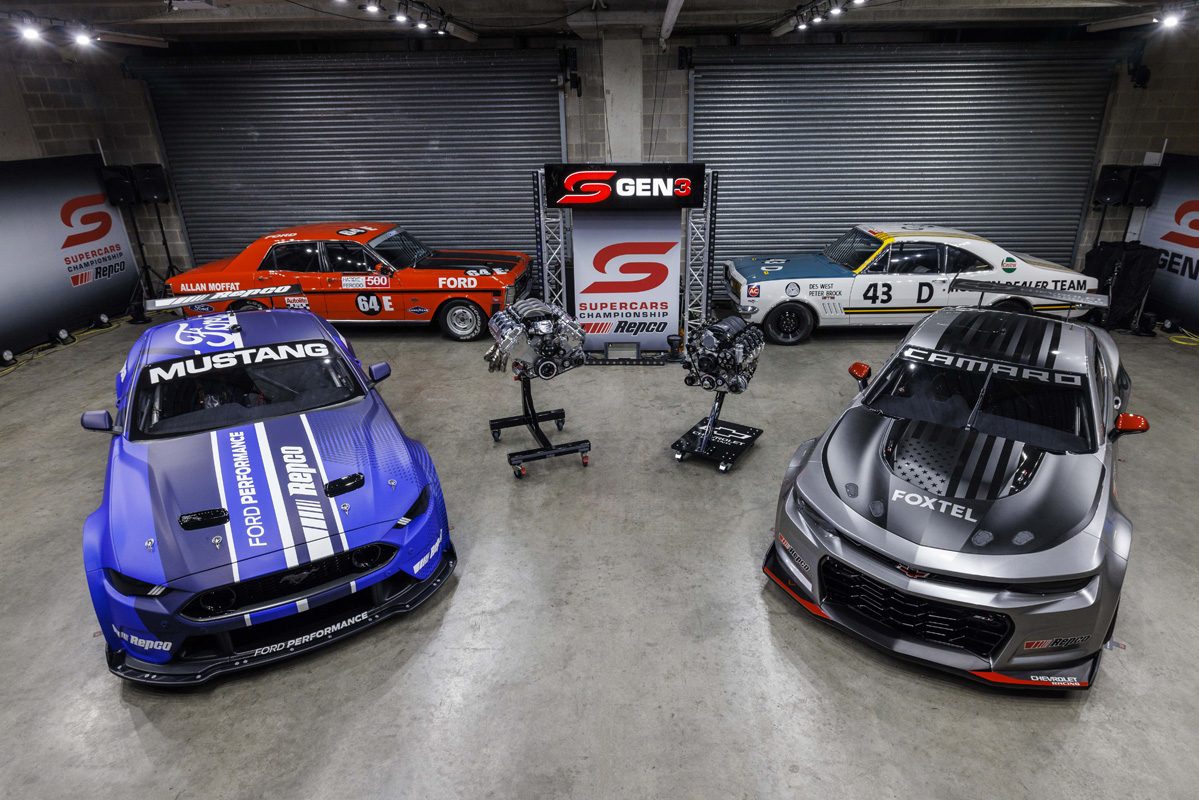 Supercars’ long-awaited watershed moment has come with the reveal of its Gen3 specification Ford Mustang and Chevrolet Camaro.

The new-look Supercars were unveiled at Mount Panorama this morning with big wigs from Ford and General Motors in attendance.

The ‘GT’ and ‘ZL1’ variants will begin racing in the 2023 Repco Supercars Championship, the category having earlier this year announced the third-such delay of the platform’s introduction.

The cars will be christened at The Mountain today with Shane van Gisbergen driving the Camaro and Anton De Pasquale piloting the Mustang.

The long-awaited launch of Gen3 coincides with the beginning of a new era for Supercars.

Last week it was confirmed the business had officially changed hands after the sale of shareholdings by Archer Capital and Supercars’ teams to Racing Australia Consolidated Enterprises Ltd.

“The motorsport and motoring worlds have been watching this announcement very closely as it is a massive opportunity for our sport to step up on several levels and attract a wider audience,” said Supercars CEO Sean Seamer.

“Both the Mustang and Camaro give a nod to the Supercar of the past, with as much attention given to the design and appearance of the cars as the new technologies.

“With the work of the Gen3 Steering Committee, our manufacturers and the homologation teams, we truly believe these cars will create close racing with a more level playing field.

“The Ford Mustang and GM Camaro are the first chapter of our new era that will be cost-effective for our major stakeholders and teams but retain the very core of our success – terrific and exciting Supercar racing, which is what our fans have been asking us for.” 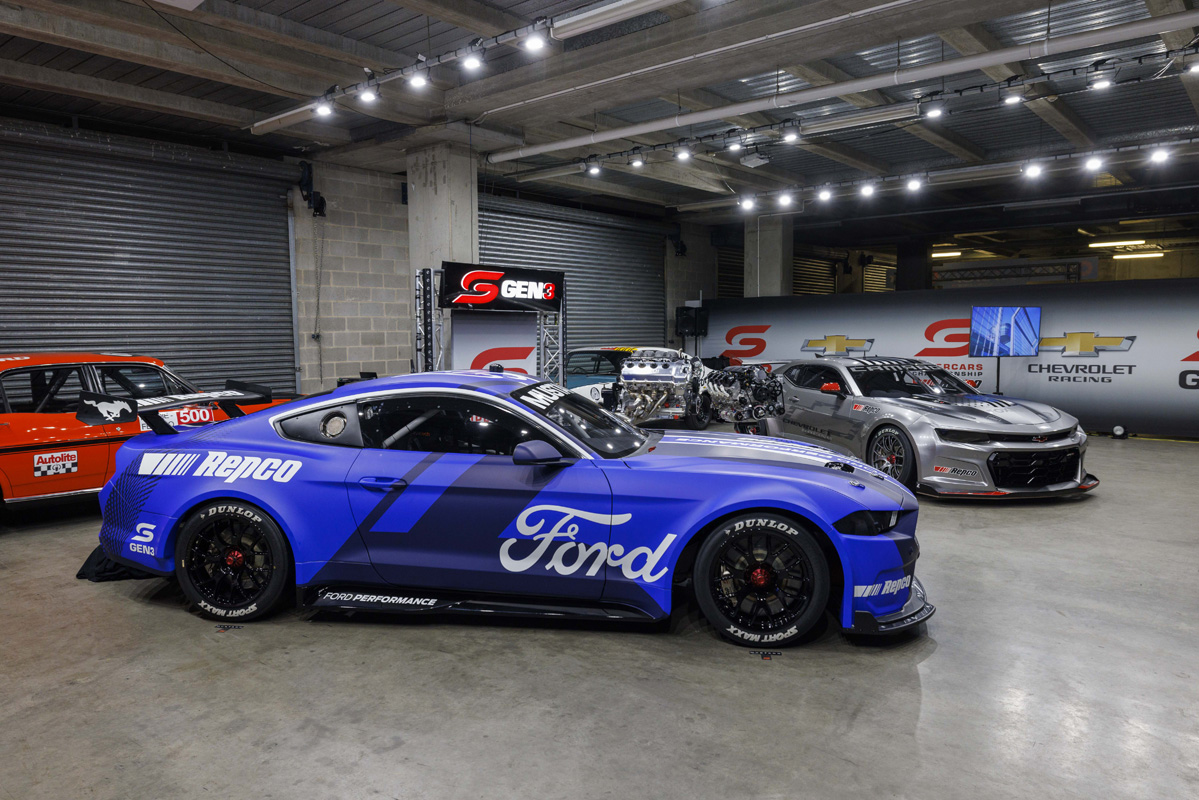 Ford Australia and New Zealand president and CEO Andrew Birkic was on hand for the landmark occasion.

Ford Performance global director Mark Rushbrook was not present trackside for the launch due to recently renewed quarantine restrictions having just arrived in Australia.

Gen3 will see a fundamental shift away from the current 5.0-litre engine formula which Supercars runs to presently under the Gen2 rules and regulations.

Instead, Ford will adopt a 5.4-litre Coyote V8 while the Chevrolet will use a 5.7-litre LTR V8.

The Ford and General Motors engines were developed Down Under by Mostech Race Engines and KRE Race Engines respectively.

“There is no question when you look at the Mustang GT Gen3 Supercar that this is a Mustang,” said Rushbrook.

“It absolutely looks the part, which was focus one for us in the design and development phase for this vehicle. The fact that it’s powered by a production-based Ford engine is the icing on the cake.

“Early indications are that this is going to be a fantastic race car, and we couldn’t be prouder of the work that has been put in by the Dick Johnson Racing team led by Ryan Story, alongside chief designer Perry Kapper and lead mechanic Mikey Flynn who have worked incredibly hard in recent months to make the project a reality.” 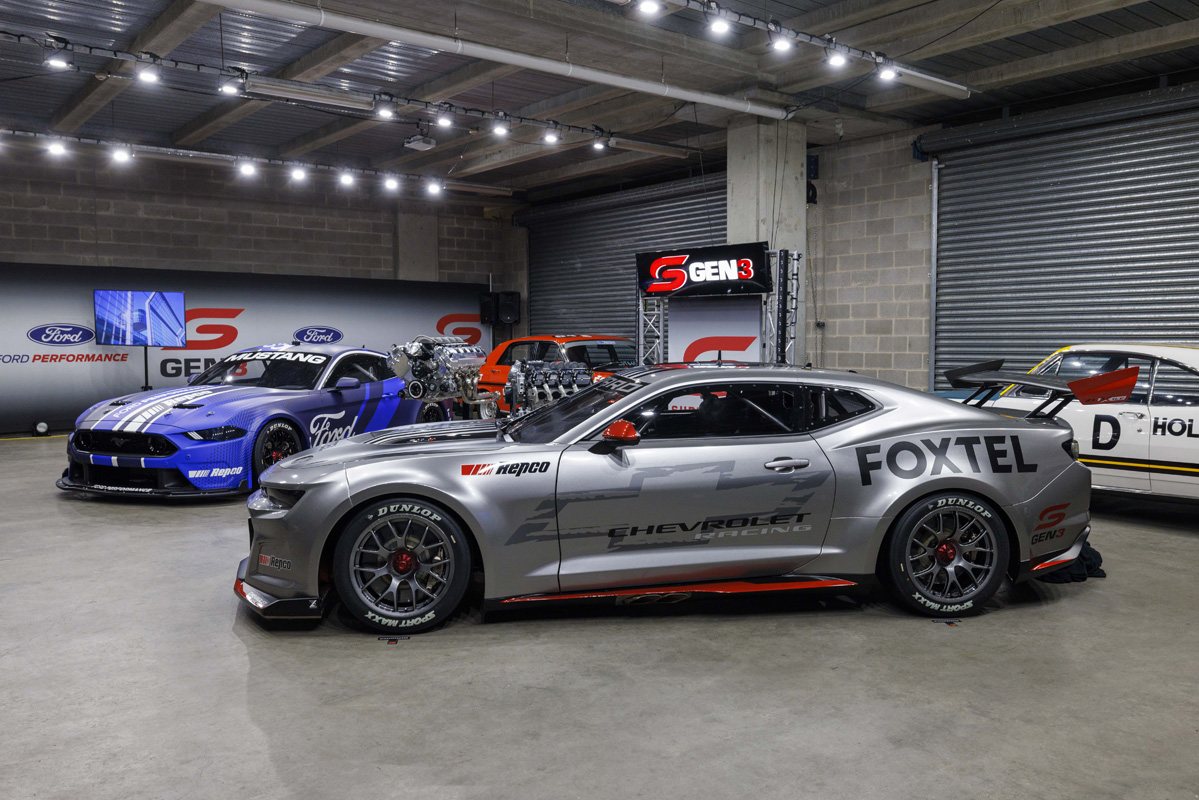 “This represents an all-new era, one in which Chevrolet Racing and our close alignment with GM Motorsport is an ongoing demonstration of our passion for competition and commitment to the sport.

“Today’s announcement is particularly timely as GMSV has just celebrated 12-months of operation in Australia and New Zealand and race fans will be able to see the full portfolio of new models here at Bathurst across the weekend, including the debut of Chevrolet Silverado Heavy Duty LTZ Premium and right-hand-drive C8 Corvette.”

Demonstrations of the Gen3 race cars will begin today at Mount Panorama and will continue throughout the 2022 Supercars season.

CLICK HERE to view a gallery of the Gen3 Ford Mustang

CLICK HERE to view a gallery of the Gen3 Chevrolet Camaro