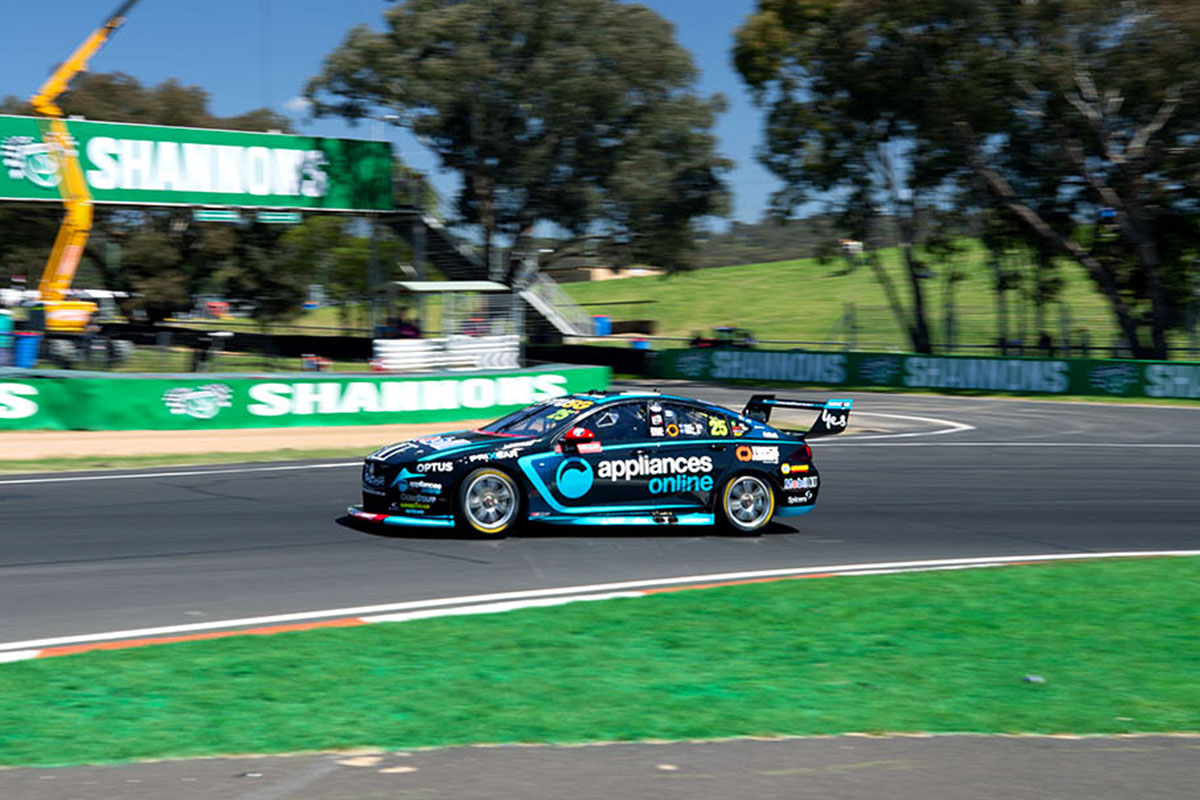 Chaz Mostert has beaten Shane van Gisbergen to top spot in the final practice session before Qualifying for the 2021 Repco Bathurst 1000.

The Walkinshaw Andretti United driver set a 2:04.2084s in the last two minutes before the chequered flag flew on Practice 4 despite kicking up the dirt exiting Murray’s Corner in the #25 Mobil 1 Appliances Online ZB Commodore.

That put Mostert 0.1106s ahead of Red Bull Ampol Racing’s Shane van Gisbergen, with Tickford Racing’s Cameron Waters another 0.1366s back after topping both Practice 1 and Practice 3 in the #6 Monster Energy Mustang.

The Shell V-Power Racing Team’s Anton De Pasquale was only 14th on a 2:05.1811s, but that time cannot be considered representative of his true pace given he made a mistake and ran well off at Murray’s on his last-minute qualifying simulation.

Practice 4 represented the first refuelling session of the event and hence began in relatively sedate fashion as several teams opted for pit stop practice, including driver and brake pad changes.

Brodie Kostecki (#99 Boost Mobile Mustang) looked like going fastest just over 10 minutes in, until he had an off at The Chase, but Erebus Motorsport team-mate Will Brown (#9 Shaw And Partners ZB Commodore) was able to do so a short time later when he pieced together a 2:05.1741s.

He therefore enjoyed a margin of over eight tenths of a second, but that was chipped away at when Nick Percat (#8 R&J Batteries ZB Commodore), De Pasquale (#11 Mustang), and then Mostert all had spells in second position.

The field was still, however, more than four tenths away from Waters’ Practice 3 benchmark of 2:04.7385s in the day’s prior session, until Mostert wheeled Car #25 to a 2:04.5401s on his third run, just over half an hour into proceedings.

No sooner had the 2020 Bathurst 1000 winner completed that lap was Waters, the 2020 pole-sitter, setting new fastest sectors on the way to Reid Park and also across the top and down to Forrest’s Elbow.

He then picked up a tow off Will Davison (#17 Shell V-Power Mustang) but a slide in The Chase meant there was no improvement for Car #6, which broke the beam with a time of 2:04.8298s.

Van Gisbergen was able to exploit the benefit of a tow down Conrod Straight, off Triple Eight team-mate Broc Feeney (#39 ZB Commodore) in the wildcard Supercheap Auto entry, when he laid down a 2:04.3190s in the final five minutes of the session.

On his next lap, the New Zealander sidestepped Mostert on the run towards Forrest’s Elbow to allow the 2014 Bathurst 1000 winner to complete his lap unimpeded.

Mostert did not waste the courtesy, storming to the 2:04.2084s to preserve Car #25’s perfect run of top threes in every session so far this weekend.