Feeney on brink of Super2 title with Race 1 win

Feeney on brink of Super2 title with Race 1 win 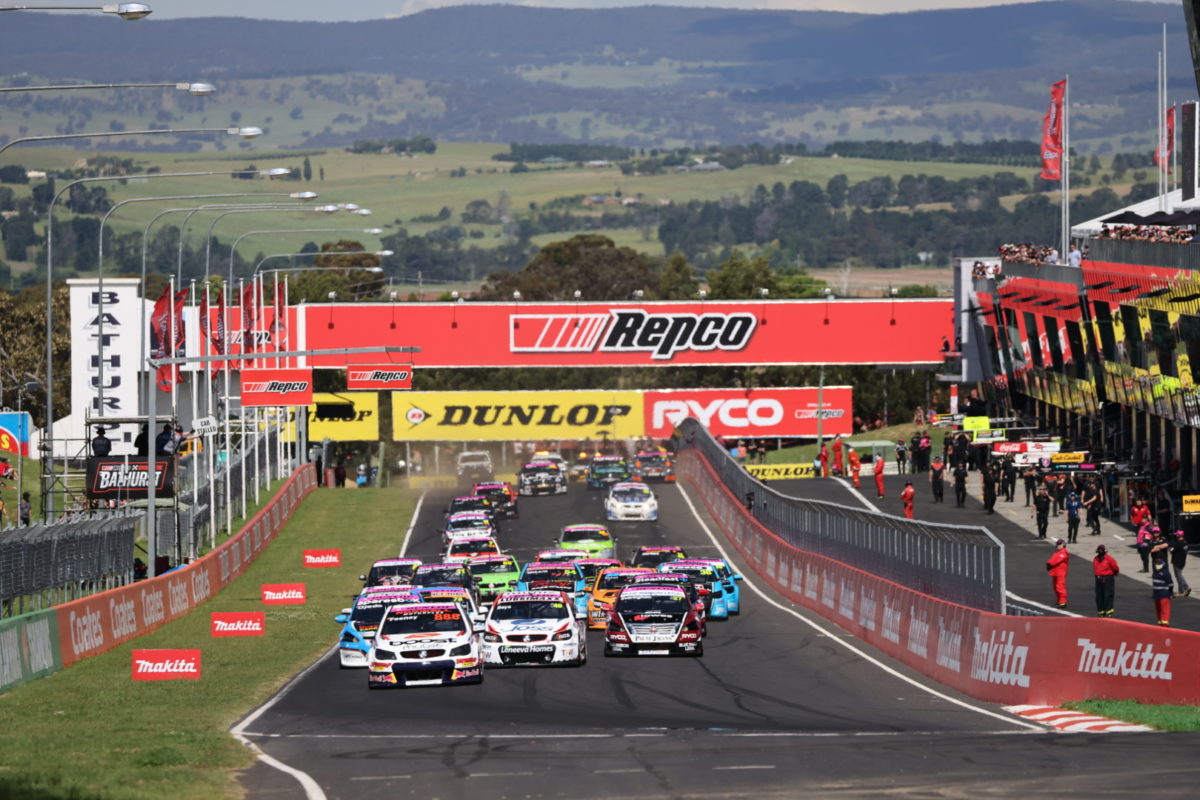 Broc Feeney leads the field away at Bathurst

Triple Eight Race Engineering’s Broc Feeney has one hand on the Dunlop Super2 Series trophy after winning Race 1 of the fifth and final round of the season at Bathurst.

Image Racing’s Jordan Boys finished a somewhat distant third while Tickford Racing’s Zak Best, who started the day second in the standings, is now out of the title hunt after getting home in fourth position.

Feeney (#888 VF Commodore) got the jump from pole position and took a clear lead to Hell Corner, from Boys (#49 VF Commodore) and Ojeda (#31 Nissan Altima).

Best (#78 FGX Falcon), emerged fourth from the opening corner and managed to fend off Tyler Everingham (#27 Nissan Altima) at Griffins Bend after the MW Motorsport driver had made a good run up Mountain Straight.

Feeney was 0.9s to the good at the end of the standing lap and 1.3s up on Boys when a Safety Car was called on Lap 3, due to Super3 driver David Murphy having beached his #24 FG Falcon at Murray’s Corner.

A restart came on Lap 5 and Feeney had skipped almost 1.0s clear again, but was only just getting onto Mountain Straight when the race came under Safety Car conditions for a second time.

The neutralisation was required because Super3 driver Paul Boschert (#25 VE Commodore) was stuck in the gravel at McPhillamy Park after contact with Zane Morse (#11 Brema VF Commodore) had sent him spinning.

Morse, who was already out of sequence due to having to serve a mechanical black flag for loose bodywork, was quickly issued a drive-through penalty for his part in the incident.

Green flags flew again for the start of Lap 8 and Ojeda was able to pick Boys off for second place at Forrest’s Elbow, a crucial move given it put him into a position to keep his slim title hopes alive.

Feeney had already skipped a full second up the road, and that remained the case despite Ojeda setting the fastest lap on Lap 10.

However, the series leader responded such that his race lead was 2.0s after three laps more, and the gap remained much the same until they took the chequered at the end of Lap 15, one early due to time-certainty.

Boys finished another 3.2s back after seeing off one attempted pass from Best at The Chase on Lap 8, with the latter running fourth for the duration of the race.

The battle for fifth was a full-on one which ultimately went the way of Everingham.

He had been running in fifth when Matt Payne (#10 Nissan Altima) went down his inside at Murray’s Corner on Lap 8, but that compromised the latter onto the main straight and Jaylyn Robotham (#999 Image Racing VF Commodore).

Robotham then went defensive at Griffins, pinching a brake and running into a somewhat light impact with the barriers, but it turns out that he had some help from Payne in getting there.

Just behind, Matt McLean (#54 Eggleston Motorsport VF Commodore) came from deep to give Everingham a nudge which the MWM driver survived.

The net result was Payne back into fifth, from Aaron Seton (#30 Matt Stone Racing VF Commodore), Everingham, Josh Fife (#38 Eggleston VF Commodore), and McLean, but the former of that bunch would be issued a drive-through for his contact with Robotham.

By the time the Grove Racing entry peeled off to serve it, Everingham was back ahead of Seton and would not relinquish fifth spot again.

Seton went on to finish sixth and while McLean was seventh to the chequered flag, a five-second penalty for more nose-to-tail contact at Griffins, with Matt Chahda, saw him officially classified 11th.

Reef McCarthy’s Super3 title hopes are over after the #61 Image Racing FG Falcon came to a halt on Lap 13, making him the only non-finisher.

Feeney is now 147 points clear in the Super2 standings and must only finish the final race of the season, which starts tomorrow at 15:55 local time/AEDT, to seal the title.