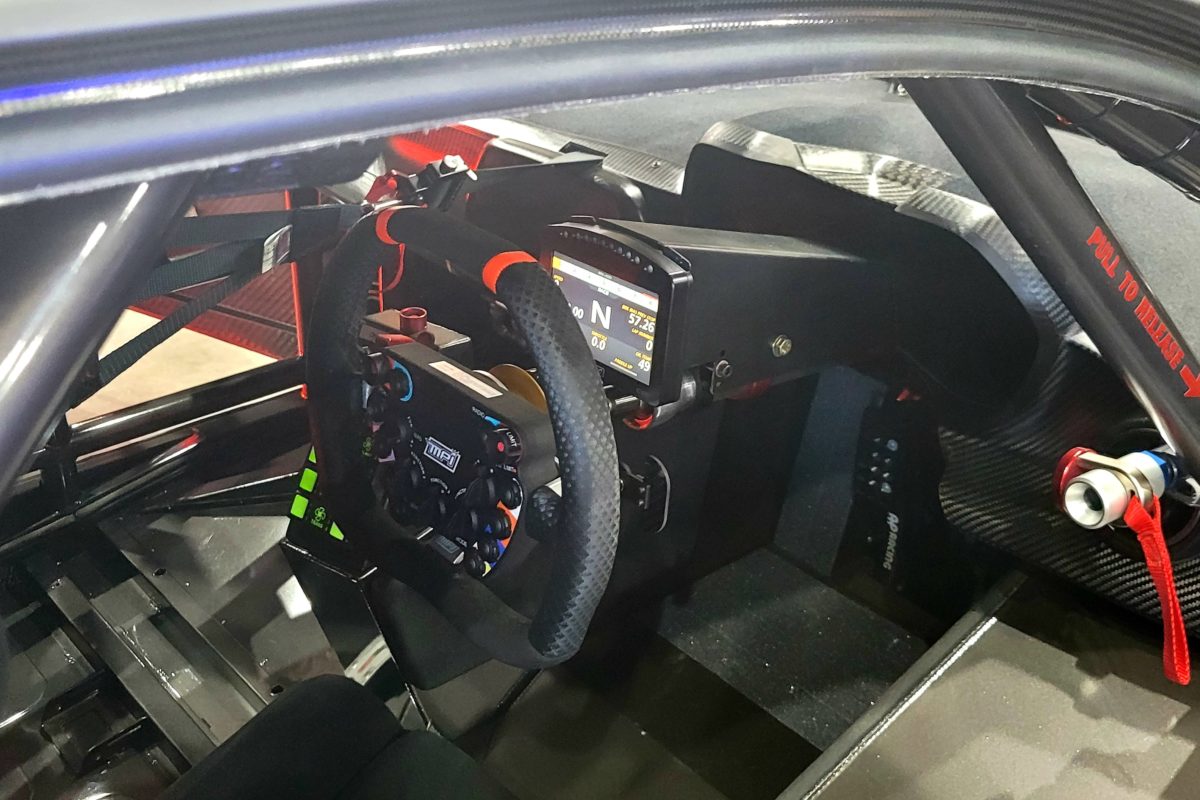 The Gen3 Camaro prototype with its paddle shifters

Roland Dane says there should be no attempt to ‘bullshit’ Supercars fans with a stick shift which does not function as a “proper manual” when Gen3 is introduced.

The question of stick shift versus paddles remains a hot topic after the unveiling of the Gen3 Chevrolet Camaro and Ford Mustang, which are set to debut in competition in the 2023 Repco Supercars Championship.

As has long been known would be the case, the prototypes collectively feature both, with paddles in the Camaro and a sequential lever in the Mustang.

However, the latter still differs from the Mustangs and ZB Commodores which are racing in this weekend’s Bathurst 1000 in so much that it does not feature an actuating rod running to the transaxle at the back of the car.

That points to the possibility that the heel-and-toe downshift will become redundant given the absence of the rod means electronic actuation, along with the electronic throttle which will replace the cable.

Dane, the outgoing boss of General Motors’ homologation team, Triple Eight Race Engineering, says he does not mind one way or another whether Supercars opts for a gear lever or paddles.

However, he advocated against retaining the lever while doing so in such a way that makes it effectively the same as paddles.

“I’m totally ambivalent about it; I don’t mind the paddle shift or a manual change,” said Dane.

“What I don’t want to see is… Ultimately, I will be on pastures new, so it won’t matter really what I think, but I think having a gear shift that’s just connected to a paddle shift is a con, and a complete waste of time.

“Either have a proper manual gearshift like we have now – which I’ve got no objection to – or have a paddle shift; don’t try and con people with something in between.

“The paddle shift has got advantages in terms of cost for teams, and most of the teams are pretty adamant that they want to save that money in terms of engine life and gearbox life and maintenance of both.

“But on the other hand, the manual shift introduces another element, that helps the better drivers in terms of balancing the car as particularly downshifting, et cetera.

“But, [it should be] a proper manual shift; none of this having a lever that just operates a couple of switches, where you’re effectively bullshitting the fans.”

Dane is presumably referring to the notion of keeping a stick while also introducing automated throttle blip for the downshifts, although Speedcafe.com’s attempt to clarify that point was shut down by Supercars CEO Sean Seamer, who had grown impatient at continued questions on the subject of gear shifting during the Gen3 press conference.

On the Ford side of the brand divide, Dick Johnson Racing general manager Rob Herrod was unequivocal in his advocacy for the gear lever.

“It’s got be a stick shift, surely; it’s got be,” he interjected when the topic of gear shifting was first raised with Dane.

“Like, you watch television, everyone loves watching the in-car camera, and if you’ve got two fingers just moving a paddle shift, that ain’t entertaining.

“On those downshifts, you want to make it look real.”

Dane responded, “So, there’s arguments both sides, and the reality is, if we have better racing, we won’t have as much in-car camera.”

He continued by pointing out that a decision, one way or the other, needs to be made soon so that engine development can progress.

“There are arguments both ways – most of the teams want to save money – so it’ll remain for other people to try and work out which side of the divide we end up as a as a category,” added Dane.

“There’s pros and cons on either side and the decision, frankly, needs to be made soon, because it affects the way the engine is built, and the expectations of the engines, because engines are placed under high stress when you have sudden deceleration.

“So, the two respective manufacturers of the engines in terms of the build of them here with Mostech [Ford] and KRE [Chevrolet], they need to understand what they’ve got.

“So, it’s a decision needs to be made.

“As I say, from a personal point of view, I don’t mind.

“I just think that those are the choices – a proper manual box, or a proper paddle shift and make the call and then crack on the life.”

Asked subsequently by Speedcafe.com about that timeline, Seamer said the call would be made in around two weeks from now.