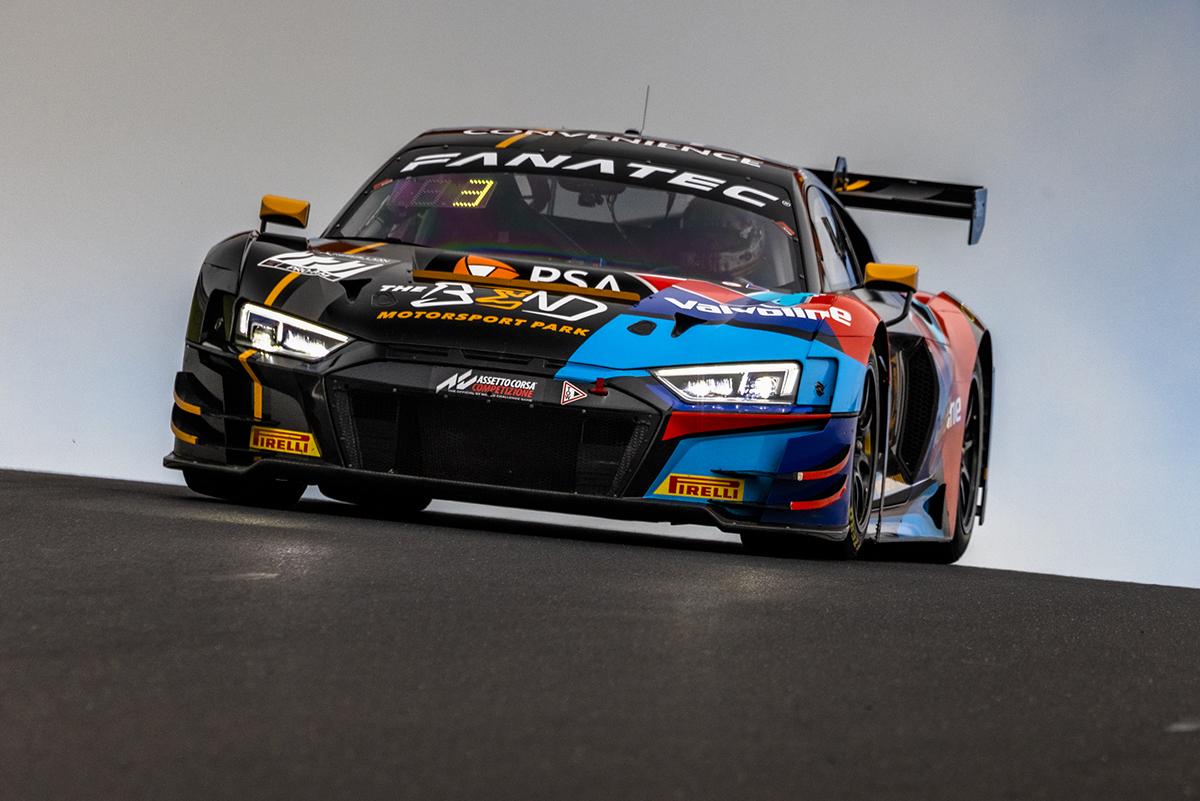 Christopher Mies has made his mark on Mount Panorama, winning the Fanatec GT World Challenge Australia Powered by AWS opener with Yasser Shahin.

Having been absent from Tuesday and Wednesday’s running and thus missing practice and qualifying, the first race of the weekend marked Mies’ first run in the #777 Audi R8 LMS GT3.

The factory Audi ace would come back from a 12-second deficit to overcome Fraser Ross and Liam Talbot in the #65 Audi, which would come home second and 6.0s adrift.

As the cars came to the green flag, third place starter Mark Rosser (#17 Audi) jumped the start and surged to the lead.

However, realising his mistake, he ceded positions on the run to Hell Corner and fell back to eighth.

Amid the awkwardness, second place starter Shahin (#777 Audi) got the holeshot over Talbot (#65 Audi).

The drama continued on Lap 1 when Rosser got into the back of James Koundouris (#65 Audi).

Rosser limped back to the pit lane with heavy front-end damage that would rule him out of proceedings, leaving Koundouris beached in the pit lane.

Racing resumed with a little under 45 minutes remaining.

A moment under braking resulted in the #38 Aston Martin Vantage of Bailey missing the apex and touring the outfield, falling back to 10th.

Shahin soon stretched his legs, although Talbot brought that gap down to less than a car length as the Compulsory Pit Stop window drew closer.

With 34 minutes to go, Talbot surged to the lead with a dive under brakes at The Chase.

Moments later, Shahin pitted and handed the #777 over to Mies.

At the same time, Ibrahim brought the #888 Mercedes-AMG GT3 to the pit lane to swap with Peter Hackett while #4 Porsche 911 GT3 R pilot Grove Snr. swapped seats with Grove Jnr.

Sheargold in the #45 Mercedes-AMG came in and gave the car to Garth Walden while Gary Higgon in the #124 Audi swapped with Paul Stokell.

One lap later, Talbot pitted from the lead with 31 minutes and 30 seconds remaining, giving the #65 to Ross.

With 25 minutes to go, the field was fully cycled through the pit stop sequence putting Ross into the lead.

Hobson was second and 12s in arrears while Mies was third, just a few car lengths behind the #96 Nissan.

Hackett and Brenton Grove were embroiled in a battle for fourth while Cini and Schumacher fought over sixth and seventh. Stokell, Walden and Bailey completed the top 10.

Drama struck for the Grove team with 17 minutes remaining, race control dishing out a stop-and-go penalty for falling short of their pit stop time.

To add insult to injury, Grove was found to have made another breach by clipping a cone on pit entry, resulting in another stop-and-go penalty.

As the final 10 minutes loomed, there were two major movers in the field; Mies, who quickly drew that 12-second deficit down to three seconds, and Stokell who gained eight places to fifth.

Ross put up a brief fight, although Mies got the job done around the outside on approach to Murray’s Corner.

From there, Mies walked away from Ross to the tune of six seconds to claim outright and Pro-Am class victory in the first race of the weekend.

Hobson completed the overall podium and in doing so won the Trophy class.

Ibrahim/Hackett were fourth, Higgon/Stokell fifth and the Am class winners.

The final race of Fanatec GT World Challenge Australia Powered by AWS gets underway on Friday at 08:55 local time/AEDT.