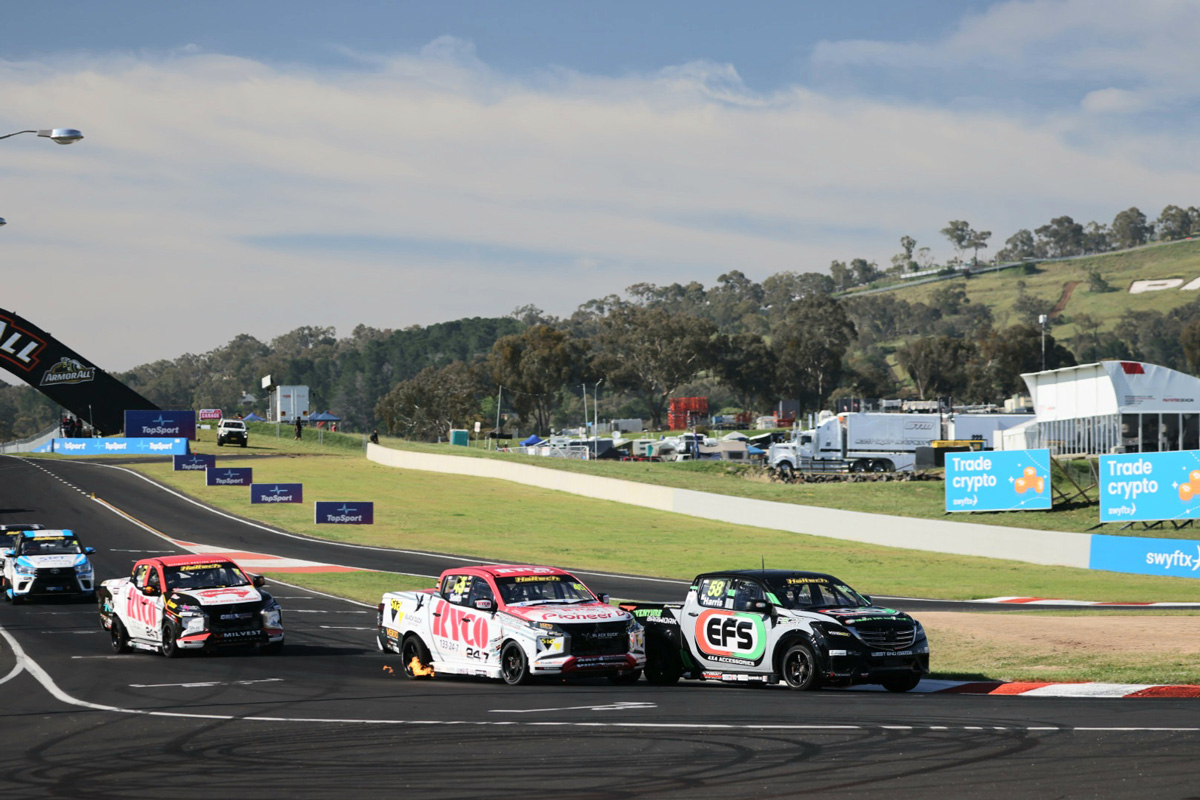 Ryal Harris has closed his title deficit to 14 points as the inaugural Haltech V8 SuperUte Series approaches a climax at Bathurst.

Harris backed up his Race 1 victory yesterday with a commanding drive in this morning’s second encounter.

Starting sixth in the 50 percent reverse grid format, the 36-year-old made a great getaway to be running third by the time the field climbed The Mountain for the first time.

It had in fact been a two-by-two drag race down Mountain Straight with Ben Walsh and David Sieders fighting for the lead, and Harris and Cameron Crick tucked in behind.

That initially was sorted out with Sieders ahead of Walsh, Harris and Crick, with points leader Aaron Borg running fifth.

On a mission to catch Borg in the overall standings before the ongoing Repco Bathurst 1000 event ends the season, Harris fired down the inside of Walsh into Murray’s Corner.

The latter’s front bumper was dislodged in the process, and he lost spots to Crick and Borg before it fully removed itself down Mountain Straight as he carried on.

Harris would catch and pass Sieders for the lead at Forrest’s Elbow on Lap 2, only for the Triton driver to make the most of a Conrod Straight slipstream and move back to the front.

That reprieve would be shortlived though, Harris getting the job done with another move under brakes into Murray’s – and from there he would be unchallenged.

In the battle for third, Borg attempted an overtake on Crick through The Chase but could not make it stick, while further back Jaiden Maggs, Richard Mork and Chris Formosa enjoyed a close tussle.

Having switched into his father Gerard’s #68 entry with the blessing of his peers after crashing his own #96 yesterday, Jaiden found more trouble on the penultimate lap.

But despite tagging the wall, Maggs was able to press on, only losing places to Mork and Formosa.

Crick skilfully kept his #7 off the wall, but did give up the final podium place in the process.

At the end of six laps, it was Harris from Sieders at a margin of 1.772s, then Borg, Crick, Craig Woods, Walsh and Mork, who staved off Formosa’s advances to cling onto seventh.

The V8 SuperUtes field will be back on-track later today for the third of four races at Bathurst, starting 14:10 local time/AEDT.