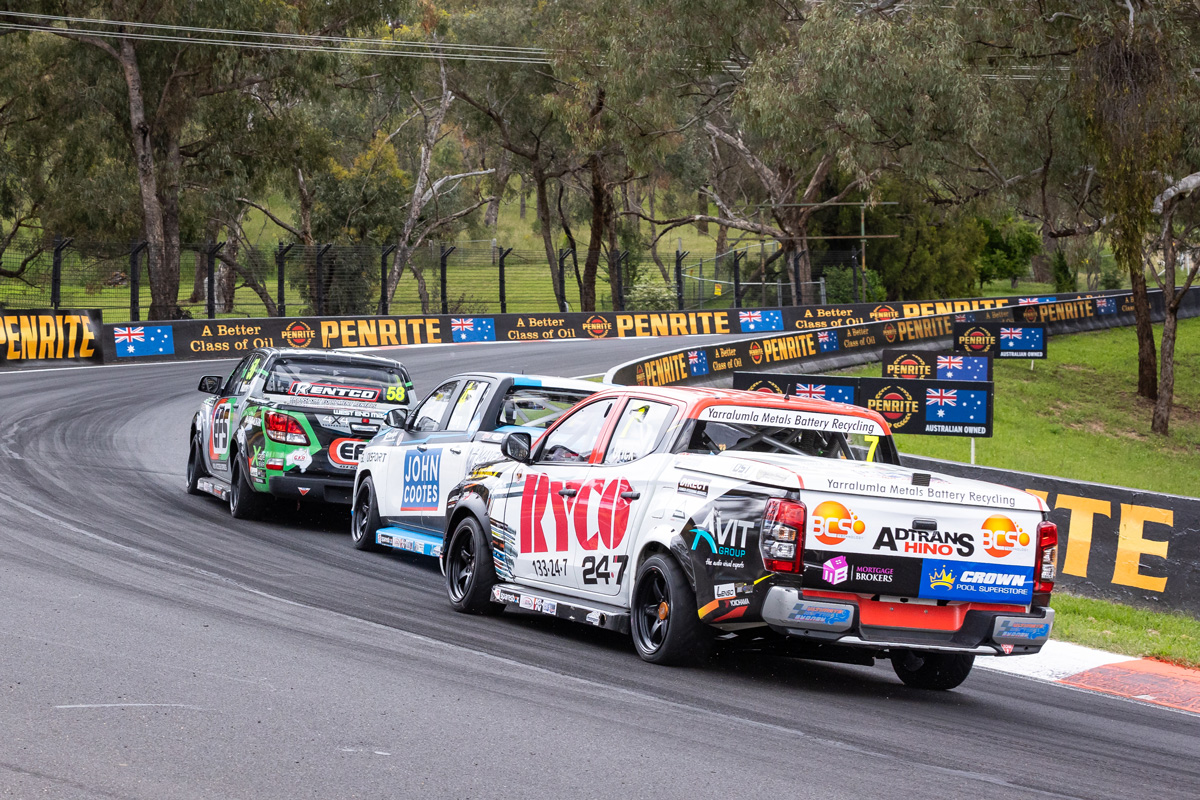 Ryal Harris ahead of Aaron Borg and Cameron Crick

Ryal Harris’ title hopes have been given a significant boost after winning the Haltech V8 SuperUte Series’ inaugural race at Mount Panorama.

With track work forcing a late start, the race would be reduced to five laps, making a fast getaway for Harris all the more imperative to capitalise on a first pole position of the season.

He did just that, and would hold station relatively comfortably from there, despite having Aaron Borg and Cameron Crick for close company throughout.

Borg, who retains a 27-point advantage atop the standings with three races remaining this season, took the chequered flag less than one second behind the #58 Mazda BT-50.

“We had a bit of a busted gasket, so we lost some horsepower, but we won so I’m happy,” said Harris, who had been hindered by a recurring fuel pump issue last round at Sydney Motorsport Park.

“It is what it is. We just have to make sure Borgy has a bad race.

“In tomorrow’s reverse grid race we’ll get the elbows out, we need to be in front of him.”

For his part, Borg said: “We’ve got decent pace, we came on pretty strong. Just have to do that all weekend, P2 in every race will secure it for us.

“It’s a reverse grid tomorrow so it’s not going to be as simple as that, but we’ll push on and of course we’re pushing for race wins as well.”

Back in the pack, there was trouble before the race even began, with Michael Formosa stopping on-track on Mountain Straight during the formation lap.

He would eventually get the #94 Ford Ranger going again, if sounding a little less than healthy.

Then on Lap 1, Mount Panorama would bite Jaiden Maggs at The Chase.

“I came in as normal, maybe tapped the brake a bit early and locked the rears and around she went,” he said.

“It’s pretty bad, the damage, the front control arms are all bent and the rear’s got a fair bit of damage. It’s unfortunate, I’m a bit upset about it.”