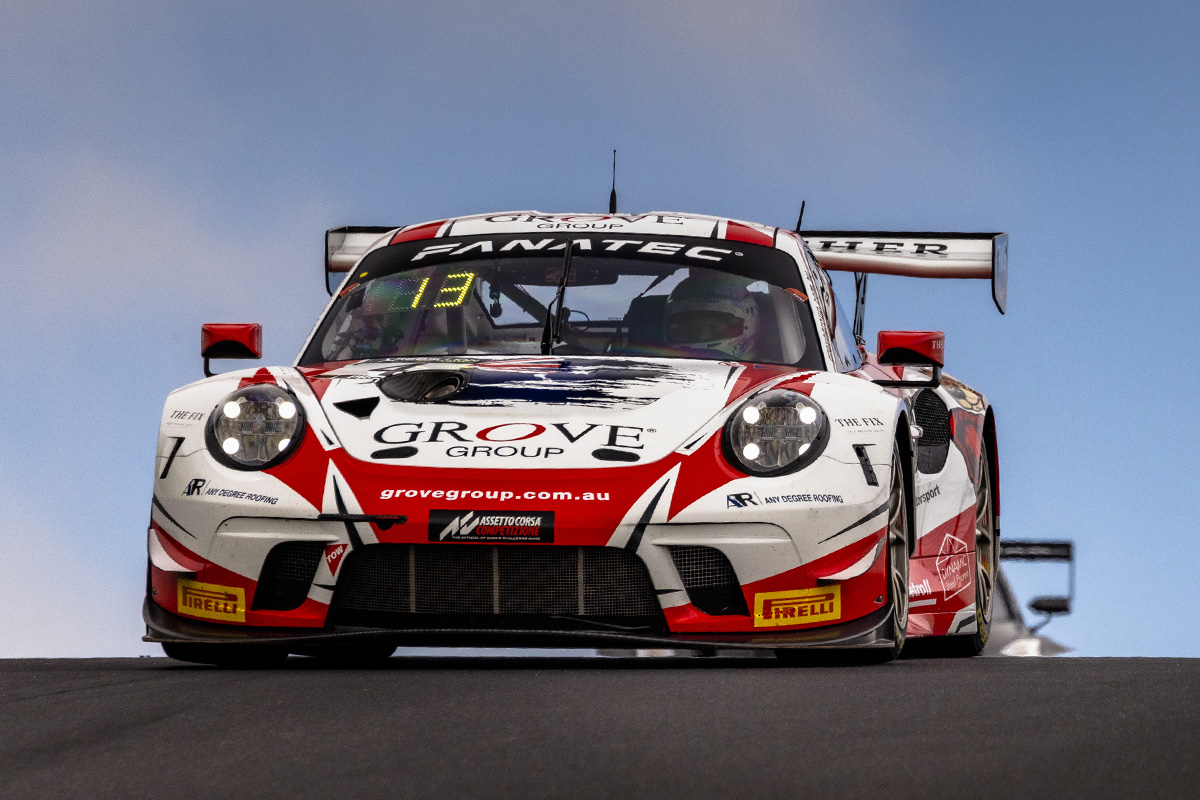 Liam Talbot and Brenton Grove have each taken a pole position for Round 4 of Fanatec GT World Challenge Australia Powered by AWS at Mount Panorama.

A late effort from Grove put the #4 Porsche 911 GT3 R on top in Qualifying 2, the father-son combination eclipsing Talbot’s team-mate Ross late in the piece.

Peter Hackett was a late improver, climbing to second at the death to put the #888 Mercedes-AMG GT3 he’ll share with Jefri Ibrahim just 0.1819s adrift of Grove.

With inclement weather looming, all 15 cars ventured out on track to bank a lap in the opening minutes of Qualifying 1, which would set the grid for Race 1.

That was quickly bettered by Brett Hobson in his #96 Nissan GT-R Nismo GT3 on a 2:07.4871s, although some way from the quickest times achieved in Tuesday’s practice.

As the session hit the 12-minute mark, rain began to fall at the bottom of The Mountain.

Talbot, who had been quickest to the first and second sector, duly bowled a wide at Murray’s Corner as he slid on the rain.

Despite the rain at the bottom of The Mountain, Stephen Grove in the #4 surged from 10th to fourth.

Grove was soon demoted to sixth as Ibrahim rose to fourth and Mark Rosser in his #17 Audi to fifth with three minutes remaining.

Hobson continued his charge, his seventh lap, a 2:07.2504s, edging his advantage out to three and a half tenths.

Having only minutes earlier been covered in cloud, the circuit was soon baked in sun as Qualifying 2 began, which would set the grid for Race 2.

Garth Walden, who is sharing the #45 Mercedes with Mike Sheargold, came within three tenths of Grove on his first flying lap, taking him to second.

Walden improved his benchmark, although didn’t do enough to best Grove, coming within 0.1805s.

With six minutes remaining, Ross climbed to the top on a 2:05.3068s to put himself eight tenths clear of the field.

Stokell followed suit, slotting in behind Ross with a time just two tenths adrift of the lead.

Walden closed in on Ross’ time, coming within 0.0944s with five minutes to go.

Hackett improved too, rising to second with a 0.3350s to split them at the death.

Race 1 of the weekend, a 60-minute affair, gets underway on Thursday at 12:25 local time/AEDT.