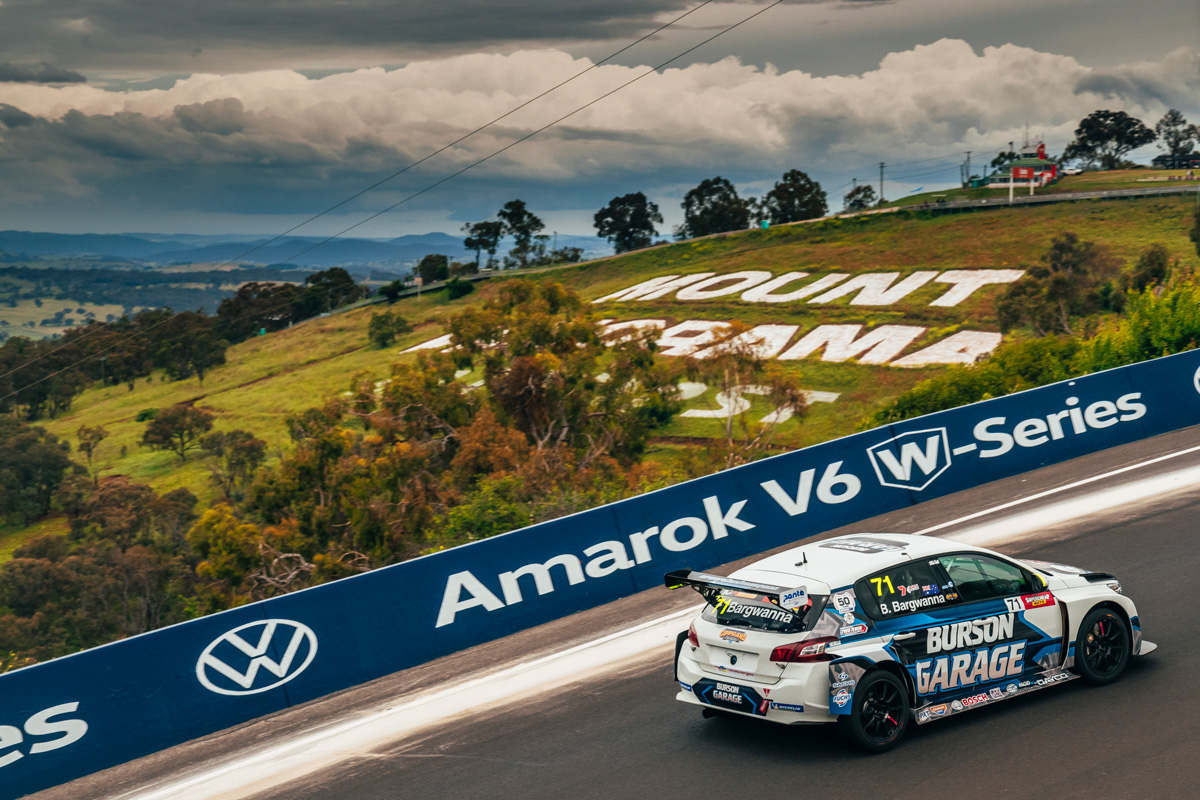 The son of 2000 Bathurst 1000 winner Jason was the only man into the 2:14s – doing so in both segments of qualifying to secure top spot.

Bargwanna Jr set an exceptional 2:14.6337s in Q1 in the fastest ever TCR lap around The Mountain, that honour having previously laid with Chaz Mostert (2:14.8162s) from Race 1 of the Bathurst 6 Hour earlier this year.

Michael Caruso was the only driver to get within one second of the #71 Peugeot in Q1, and that form guide would prove indicative of what was to come when the top 10 proceeded to a 10-minute session of their own.

The battle for pole position began in dramatic fashion when title contender Luke King speared off at The Chase following what appeared to be a mechanical failure of sorts.

As it turned out, the #2 Melbourne Performance Centre Audi was lucky not to flip as it careered through the kitty litter at high speed.

As the session carried on, it was Bargwanna who would waste little time in re-establishing the upper hand.

Various drivers moved up to second – James Moffat, Aaron Cameron, and finally Caruso – but no one could get near Bargwanna when he improved again to a 2:14.8922s. That earned the 20-year-old a bonus two points to his season tally.

John Martin and Cameron will share the second row, ahead of Moffat and Bradley Shiels.

King will line up ninth, Dylan O’Keeffe (10th) having never made his way onto the track in Q2.

Earlier in the piece, seven cars had been eliminated during the 20-minute first segment of qualifying with Jordan Cox the highest profile casualty.

The Alfa Romeo driver had topped both practice sessions yesterday, setting a practice/qualifying lap record in the second of those, but will start Race 1 from down in 16th.

That was a result of a wild run through The Chase, with damage preventing him from recording a competitive lap time at all.

That leaves him only ahead of Keegan Brain, who completed just the one installation lap after a troubled Tuesday, and the quarantine-sidelined Christopher Mies.

The German ace will miss Race 1, starting at 16:25 this afternoon (local time/AEDT), before arriving at the track tomorrow.

Hanson stopped at the top of The Mountain with smoke billowing from the back of his #9 after a recurrence of a turbo issue.

Mineeff’s Q1 session ended with a spin into the gravel at Hell Corner, triggering the red flag and offering relief for 10th-placed O’Keeffe.

That would be the catalyst for some Buchan heartbreak, with the red flag waved just seconds before he crossed the finish line on a lap that may have been good enough to catapult him into the 10.

Following Race 1 today, another two races will unfold on Friday and Saturday.