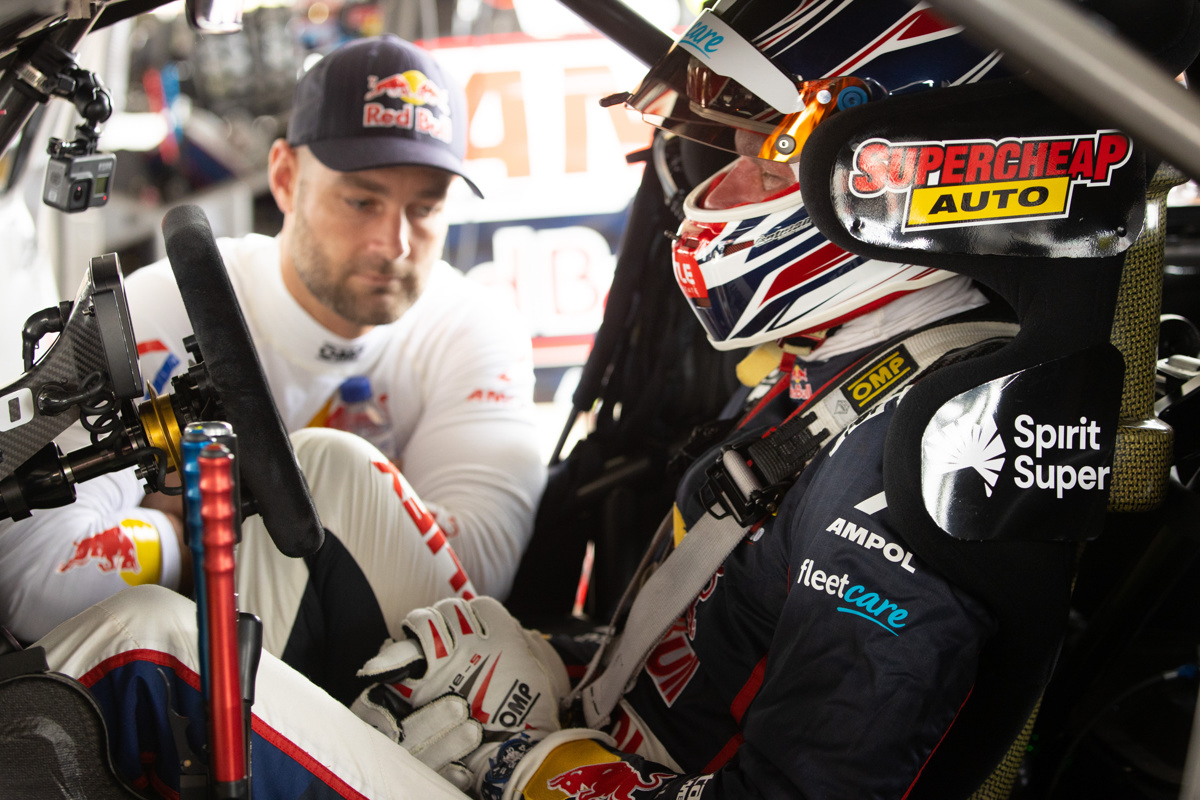 Muscle memory will be important for Garth Tander when gets his first meaningful mileage in Shane van Gisbergen’s car in several months at the Repco Bathurst 1000.

Tander reprises his role as co-driver to van Gisbergen at Red Bull Ampol Racing after helping the now two-time Repco Supercars Championship winner get his breakthrough victory in the Great Race last year.

However, being a resident of Melbourne and competing with a Brisbane-based team means he has been limited for pre-Bathurst seat time in the New Zealander’s ZB Commodore due to border closures for the second year in a row.

Still, that does not faze the man who became a four-time winner of the 1000 after last year’s triumph.

“There’s a lot of muscle memory for me driving a Supercar, having done it for 21-odd years,” said Tander.

“When you drive out of the pits here at Bathurst, and you start to head up the mountain, it all becomes natural and you don’t even really think about it too much consciously; it sort of just all happens.

“Look, [there is] plenty of time in the lead-up over practice before the race starts Sunday morning, so no real pressure, just get myself comfortable.”

Triple Eight Race Engineering was not one of the teams in action just over a fortnight ago when several tested between the third and fourth events at Sydney Motorsport Park.

The likes of the Shell V-Power Racing Team’s Tony D’Alberto and Walkinshaw Andretti United’s Warren Luff, on the other hand, did get to break their drought behind the wheel of a Supercar, but Tander is not worried if he is off the pace in practice at Mount Panorama.

“I haven’t driven the Supercar properly since May, so, difficult to jump in the Supercars and be on the money straight away on Thursday practice,” he admitted, having spent the Additional Drivers Practice at Sydney Motorsport Park last month simply doing hard tyre set-up work for van Gisbergen.

“But, they don’t give the trophy out on Thursday in practice, they give it out on Sunday afternoon.

“I’ve been to Bathurst 21-odd times or something like that, so I’m confident we’ll be alright.”

All up, there are six hours of practice running this weekend, half of which is stipulated for ‘additional drivers’, those being the co-drivers, only.

Also taking pressure off Tander is the fact that van Gisbergen has now, unofficially, sealed the 2021 championship already, having left Sydney with a 349-point margin over the field.

Nevertheless, that does not mean caution can be thrown to the wind completely. “You’ll need some self-preservation because it’s still a long race, and it’s a long week,” noted the 44-year-old.

“But, you still need a straight car going into qualifying, you need to qualify well, and you need to execute a thousand kilometres better than anyone else.

“So, how we strategise the race and how we play the race out might be different to how it could have been if the championship was still in play, but the last 60-odd laps on Sunday afternoon will be pretty wild.”

Tander also downplayed talk of favouritism for victory on Sunday, pointing to team-mates Jamie Whincup/Craig Lowndes, and a number of others, as genuine chances.

“Even though we’re obviously reigning champions, and Shane’s just wrapped up the championship, I think there’s plenty of other cars that are more than capable of winning this race,” he stated.

“I know there’s been a lot of commentary around the fact that the 97 car is one of the favourites, but how can you go past Jamie in his last race [as a full-time driver], sharing the car with Craig?

“Cam Waters and James Moffat in the Monster Mustang [Tickford Racing] were really fast at the 1000 last year and Cam was fast here at the start of the year as well for the start of the championship.

Despite the ’97 car’ reference, van Gisbergen/Tander will in fact drive Car #888 this weekend as a tribute to retiring Triple Eight team principal Roland Dane.

The duo were presented yesterday with the plaque which names them as last year’s Bathurst 1000 winners, with it to now be laid on the Victor’s Walk on Russell Street, in Bathurst’s CBD.