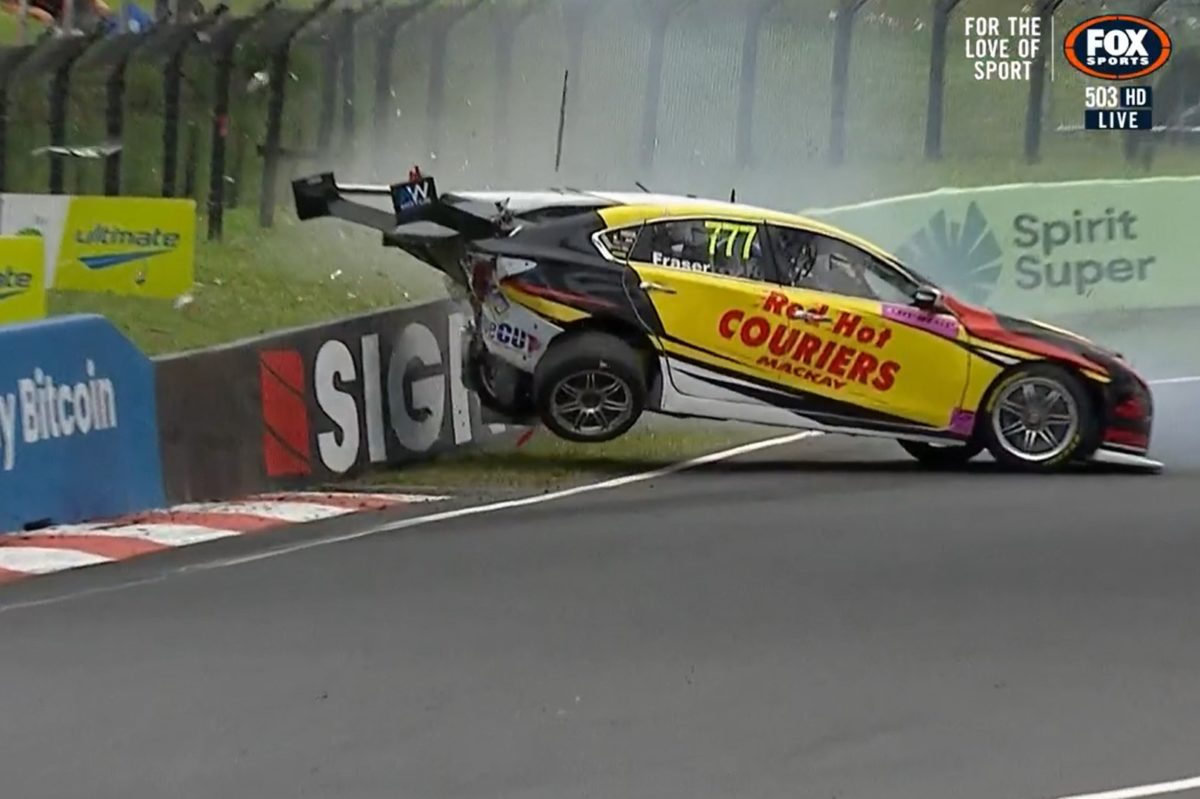 Jordan Boys has gone fastest in Practice 2 for Round 5 of the Dunlop Super2 Series at Bathurst as Declan Fraser crashed hard at the top of the mountain.

Fraser lost the back of his MW Motorsport entry after the right-rear wheel nut popped out on the run through Sulman Park, causing the the #777 Nissan Altima to spin into a heavy rear-end hit with the wall.

While the 21-year-old exited the wreck under his own power, the triggering of the red flag with just over two minutes remaining meant that what would have been a 40-minute session did not restart.

The early end to proceedings cemented Image Racing’s Boys in first and Matt Stone Racing’s Aaron Seton in second, those two having apparently been the only Super2 drivers able to get in a green tyre run before Fraser’s smash.

Boys was 0.4294s up on Seton at that point, with MW Motorsport title contender Jayden Ojeda third at 1.0512s off the pace thanks to a lap set on his first run. Everingham improved his time but not his position with a 2:08.1305s at the start of his second run, while team-mate Ojeda aborted what looked like a quick lap.

Feeney went to second spot with a 2:07.9815s on his third run, immediately before he was baulked by Super3 driver James Masterton (#219 Masterton Motorsport VE Commodore) exiting Hell Corner.

Having also been held up by Masterton in Practice 1, the Triple Eight driver showed his displeasure by gesticulating in the cabin and then moving across on Car #219 as they ran up Mountain Straight.

Boys appeared to be the first to go for a serious green tyre run when he vaulted from seventh to first with a 2:06.8092s, making him the first to beat Ojeda’s Practice 1 benchmark, and more than a second faster than Ojeda for the session to that point. The Image Racing driver went even faster next time around, breaking the beam at a time of 2:06.7642s despite only going fastest in the first sector and then slower than his personal-best in the second and third sectors.

Seton subsequently improved six positions with a 2:07.1936s, and that was the last change at the pointy end.

Just behind the top five of Boys, Seton, Ojeda, McLean (#54 VF Commodore), and Feeney was Payne in sixth and Best in seventh on their aforementioned lap times.

Fraser was credited with 11th although that may prove a moot point depending on the state of Car #777, with Angelo Mouzouris last of the Super2 runners in 16th after a steering rack problem reared its head in the #6 Triple Eight VF Commodore.

Qualifying for Race 1 of the weekend, which is set to see both classes on-track at the same time, starts tomorrow at 09:30 local time/AEDT.