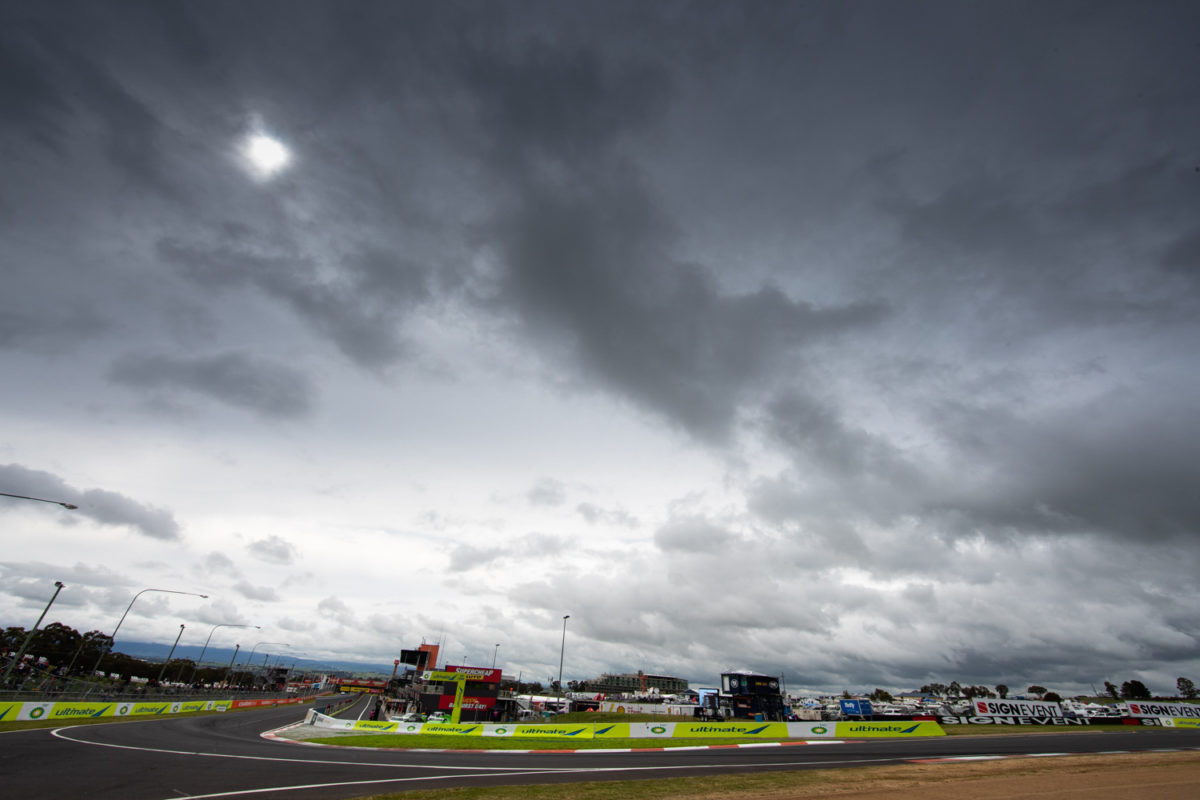 Mount Panorama during the 2020 Bathurst 1000 event

Circuit management at Mount Panorama is confident that continued rain will not be a major issue at the Repco Bathurst 1000.

Bathurst has already experienced 240mm of rain this month, with more falls at least an even money chance every day prior to this Sunday.

The Repco Supercars Championship has just come off a quartet of events at Sydney Motorsport Park where weather was sometimes a major factor, particularly when one race was cut short and another declared before a result could be reached.

On at least the latter of those occasions, that being the most recent attempt at running a race, a popular observation was that the rain, light though it may have been, was running across and/or pooling on the track due to the ground already being saturated by earlier falls.

Meanwhile at Challenge Bathurst, held on the weekend of Supercars’ third Sydney event, there was significant disruption to the track programme as a result of heavy rain.

Despite the Bathurst 1000 weather scenario looking like being a similar one to that which played out at Eastern Creek, circuit manager Mark Rayner says there is no reason to be concerned.

“All our drainage is working, but because the water table’s so high, water that would normally run onto the grass verges and be absorbed or soaked up, is just sitting on top.

That water is on drivers’ right, meaning the kerb at the exit of Hell Corner might best be avoided, but the predicted weather is otherwise kind.

Bathurst copped almost 38mm of rain on the most recent Friday, as continued falls caused flooding across several areas of New South Wales.

However, the latest forecast from the Bureau of Meteorology is for up to 6mm of rain this Saturday in Bathurst, no more than 5mm on any day prior, and only a 20 percent chance of rain on race day.

Rayner says that circuit is currently in an “absolutely brilliant” state and should hold up well.

“[This] week is forecast the occasional shower, 2 to 3mm, right through the week,” he noted.

“But if we get that forecast, come Sunday, the place will be picture perfect.”

In the unlikely event that there are storms, the usual trouble spots would be affected, but that is unavoidable.

“You take the likes of The Cutting and everything like that, obviously you’re going to have water coming across the road if there are severe thunderstorms,” added Rayner.

“Forrest’s Elbow is the same, Dipper… wherever you’ve got elevation on the track, the water’s got to go somewhere, so in a severe thunderstorm, you would naturally have rivers across the track.”

There is nevertheless one unique challenge this year, namely that the Bathurst 1000 is a six-day event rather than a four-dayer.

Track activity starts tomorrow, with the Supercars Championship field on-track for the first time on Thursday, as is customary.