Matthew Payne experienced the highs and lows of racing in his highly anticipated Dunlop Super2 Series debut but says he’s learnt a lot in quick time.

Payne, who recently signed to the Grove Junior Team, made an impressive start to proceedings on Friday last week at Sydney Motorsport Park.

In what was only his first session with the full Super2 Series field, the young New Zealander topped opening practice.

The 19-year-old was a late call-up for Kelly Grove Racing to drive in the Additional Drivers Practice later that afternoon as part of the Repco Supercars Championship.

There, he set quickest time of the session in the #26 Penrite Racing Ford Mustang, albeit on a new set of tyres.

Payne carried that momentum into Saturday morning, qualifying his #10 Nissan Altima on the front row alongside MW Motorsport’s Jayden Ojeda.

It was a case of history repeating for Payne, who stalled on the start line in the weekend’s opener as he did so just a few months earlier in the most recent Porsche Paynter Dixon Carrera Cup Australia round on the streets of Townsville.

“I could have helped myself a little bit more with getting to know the procedure and be a bit more familiar with that,” Payne explained.

“I did everything right up until right when the lights were coming on. I just went too early on the clutch and it burnt it. It was pretty much just like Townsville really, which is a little bit frustrating.”

Payne would eventually finish his first race in 17th overall, spinning a Super3 Series entry in the process.

If Saturday was tough, Sunday was almost as bad as it gets.

Having never driven a Supercar in the wet, Payne qualified 14th. 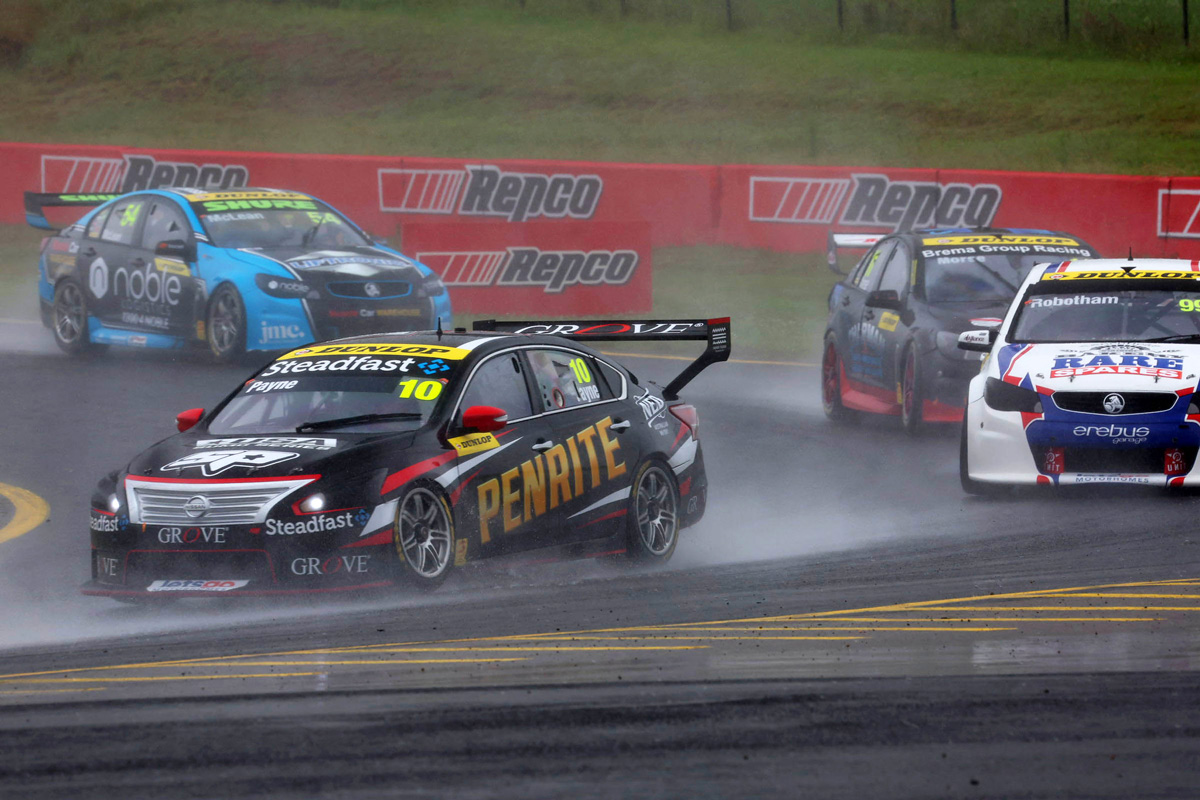 Payne behind the wheel of the #10 Nissan Altima

The rain would worsen come Race 2 of the weekend, although the teenager took to the conditions and made headway early on.

After a Safety Car intermission for an early incident, Payne’s day would come to a premature end when he aquaplaned off the circuit at Turn 1 and made heavy contact with a tyre wall.

“It was frustrating because the conditions were a lot worse than what it showed, I could barely see two metres in front of me, it was that bad,” Payne said.

“I think we were definitely a lot faster in the wet in the race than qualifying. We changed a few things on the car and it was a lot quicker.

“To me, it didn’t really feel like I did anything wrong. We looked at the data and nothing is out of line but I think the conditions and what I was asking of the car was too much.

“It ended in the worst way, unfortunately, but as I’ve said before it’s part of learning. We’re building on that.”

Less than two weekends on, Payne will be back behind the wheel for arguably the biggest race event of his career.

It’ll be a busy schedule, with the two categories often back-to-back across the week’s running.

Considering the turbulent start in Sydney, it’ll require a measured approach at Bathurst.

“I’ve thought about it quite a bit,” said Payne.

“I think it’s sensible for us not to take too many risks. Obviously winning is always the goal, but for this weekend it’s important for us to think of the big picture.

“I’m going to be driving just like normal, but for sure, we have to not take risks at that track, the mistakes have huge consequences.

“I think it’s going to be a really good weekend. I’m just looking forward to driving both cars there. I think it’ll be a wicked opportunity.

“For me, most of the learnings are just working on myself and just making sure I’m minimising mistakes.

“I did and didn’t expect to be right up the front in the Super2 car. We’ve got a great team working on it, it’s been a team effort to be up there that fast, but I think one-lap pace is super important, especially around Bathurst, but there’s always risk that comes with using all of that.”

The Super2 Series and Porsche Carrera Cup Australia both hit The Mountain for the first time on Wednesday, December 1.