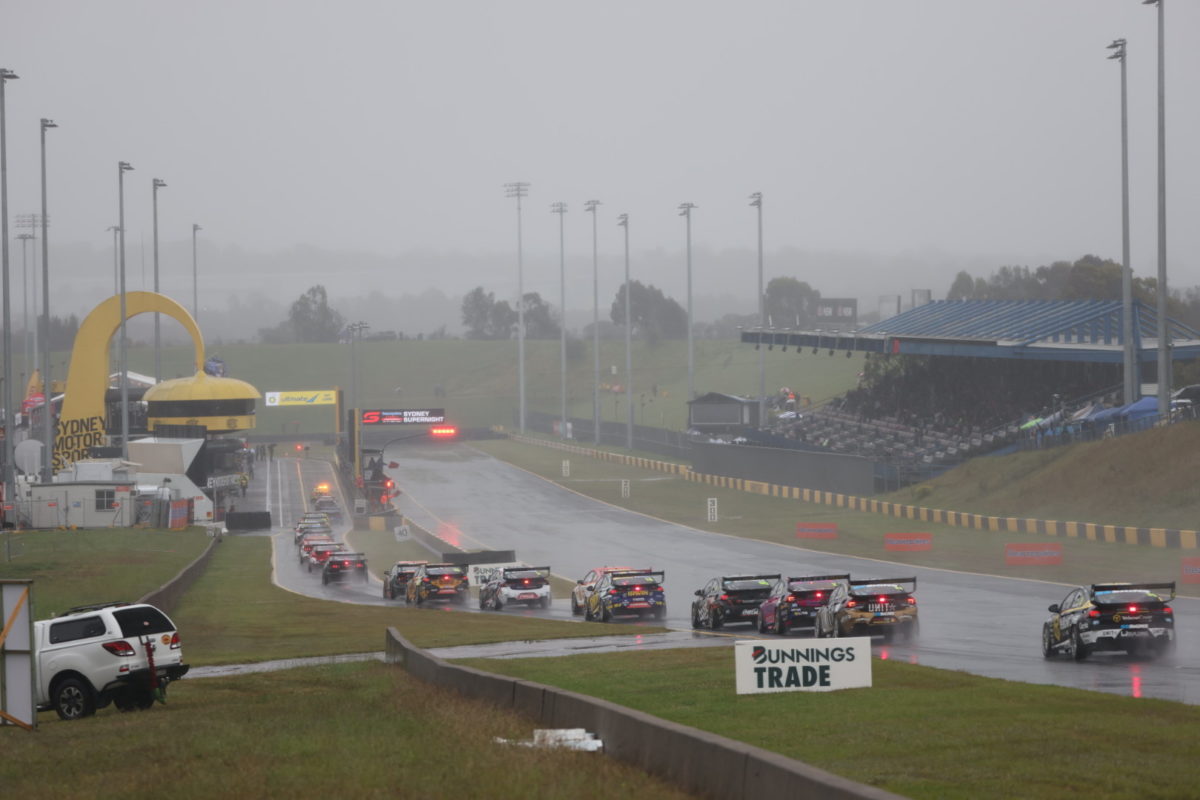 An already waterlogged Sydney Motorsport Park is said to have contributed to the conditions which saw Race 30 of the Repco Supercars Championship called before a result could be reached.

The second and final race of the Beaurepaires Sydney SuperNight never really got going, with the first five laps held under Safety Car conditions before Race Control ordered a red flag from which there would be no restart.

That decision was made despite the rain which was falling at the time only appearing quite light, and only around 14mm of rain having been recorded at the nearby Horsley Park weather station in the period from 9am to when the red flag came at 15:45 local time.

That was a point backed up by pole-sitter Nick Percat, who said he only needed the windscreen wipers on his R&J Batteries machine on the intermediate setting, and voiced his frustration at the decision to not race.

However, the Eastern Creek area, which includes Prospect Reservoir just to the southeast of the race track, has been subject to regular falls since early this month.

Between that and the persistence of drizzle in the hours leading up to Race 30, the water was not soaking into the grass but instead pooling on or flowing across the circuit.

While visibility may not have been terrible, the track surface is said to have made racing a risky proposition.

“It rained overnight obviously and it’s been raining on and off for a couple of weeks, so from what I can see, the ground’s waterlogged,” Red Bull Ampol Racing team manager Mark Dutton told Speedcafe.com.

“The rain that falls doesn’t get soaked into the ground because the ground’s saturated.

“Therefore, it can run across the track and cause those rivers, [even] where there’s not that heavy rain at that exact moment.

“You think, ‘Hang on, it’s not that bad,’ but it’s just the water being held, and one of the amazing things about SMP is obviously the undulation and the sort of amphitheatre that you have in some of the areas.

“Having the hills around you, water flows downhill and ends up on the track.”

Erebus Motorsport CEO Barry Ryan told Speedcafe.com, “It was [due to] the rivers of water across the track, and because the grass is so wet out there, it was just going to keep coming out, even when the rain slows down.

“When you’re aquaplaning… No driver needs to be along for the ride, waiting for the crash.”

It was only a fortnight earlier that a night race at SMP was called early, with some also citing standing water on that occasion as reason enough to do so.

Furthermore, the start of Race 30 was delayed in order to restore safety barriers after a wild Dunlop Super2 Series race, which was also canned before half-distance.

Ryan was reported on the broadcast as one who did not want the latest Supercars Championship encounter to progress from Safety Car conditions.

While Erebus is one of the Melbourne-based teams, he pointed to the difficulty which the Queensland teams face in having barely more than a week to prepare cars for the Repco Bathurst 1000 while they cannot return to their home state.

“That was only more in the protection of Queensland teams,” stated Ryan.

“They can’t go home, so if they write off a car, how are they going to go to Bathurst?

“The whole point of this whole thing is to protect Bathurst, and we need to keep Bathurst on.

“I want to race all the time, but sometimes you’ve got to think of what’s best, and they were pretty dangerous conditions, way worse than the races earlier in the day.

An excess of standing water was also given as the reason for what was initially a race suspension by Supercars’ head of motorsport, Adrian Burgess.

The non-result meant that Shane van Gisbergen clinched a second drivers’ championship, although he will have to wait until the Bathurst 1000 is done for that honour to be made official.